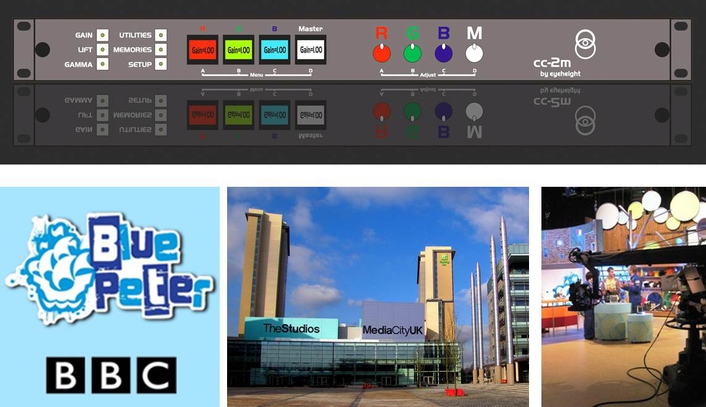 Control panel layout of Eyeheight’s CC-2M colour corrector at use for Blue Peter
Eyeheight CC-2M colour correctors have been chosen for use in the BBC production Blue Peter, the world’s longest-running children’s television show. Two CC-2M systems are being employed to ensure uniform colour balance is maintained throughout each programme.

“Colour balance is an aspect of broadcasting most television and film viewers are unaware of thanks to the behind-the-scenes correction made during live shooting and post-production,” comments Ben Colgan, Studio Equipment Allocator at TheStudios, MediaCityUK. “The CC-2M colour correctors are being used to offset variations in colour balance that might otherwise be visible when switching, for example, from a daylight to an interior shot or even when changing the shooting angle. These colour balance variations are inherent in normal human vision and are automatically compensated for in the brain. In broadcast television production, colour balance adjustments are checked by an experienced colourist while watching a preview monitor.”

Eyeheight’s CC-2M colour corrector is an auto sensing SD and HD system allowing independent real-time adjustment of red, green and blue component levels, master gain, lift, gamma and hue. A preview output provides a configurable split screen showing processed and unprocessed picture. The CC-2M has a dedicated control panel which operates over Eyeheight’s I-Bus network enabling each panel to control up to six plug-in modular colour correction cards in a single-rack-unit smart-chassis with easy channel switching. Up to eight panels can be networked. The system also includes a maintenance mode to assist installation.

First aired on 16 October 1958 from Lime Grove Studios, Blue Peter (www.bbc.co.uk/cbbc/shows/blue-peter) proved highly influential in the formulation of children’s television and is one of Britain’s most widely respected contributions to broadcasting. Production of the series recently moved from the Television Centre in London to the BBC’s new facilities at Salford Quays with a new-look studio, new music and title sequence.