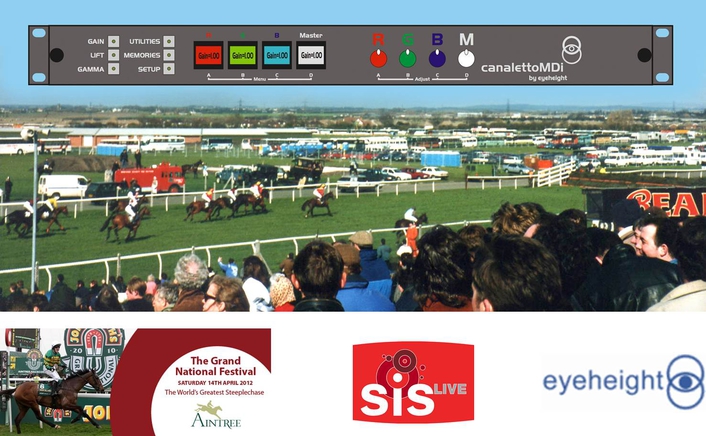 The Grand National is an annual steeplechase run over a distance of 4 miles and 856 yards
SIS LIVE, one of Europe's large outside broadcast and uplink service provider, and product design specialist, has chosen an Eyeheight canalettoMDi multistandard colour corrector for use during coverage of the 2012 Grand National steeplechase on 14 April.

Installed in one of several vehicles which will be on site from the SIS LIVE fleet, the canalettoMDi will receive live high-definition video of the event from a gyro-stabilised camera aboard a helicopter. It will allow fast adjustment of colour balance to match feeds from other cameras positioned along the course.

“Eyeheight colour correctors have contributed to successful coverage of many outside broadcast events as well as in studio productions, video post and telecine grading,” comments Eyeheight Sales Director Martin Moore. “Four canalettoMDi units were deployed by SIS LIVE during outside broadcast coverage of the Six Nations rugby tournament at Murrayfield and Twickenham. The canalettoMDi system was also used by SIS LIVE during the 30th London Marathon to grade video from cameras on two motorcycles and two helicopters tracking the run.”

Eyeheight’s canalettoMDi is a high-quality multi-definition digital colour corrector for use in 1080i and 720p HD-SDI television standards as well as 625-line PAL and 525-line NTSC SD. Integral HD-SDI/SDI autosensing enables the unit to switch automatically to the incoming feed. Input and output are both to 1.5 gigabit/s HD-SDI SMPTE-274 standard or SDI. Each R, G and B channel has individually controllable gain, lift and gamma together with overall hue correction.

An integral legaliser with automatic luma overshoot suppression and undershoot control ensures that canalettoMDi's output conforms fully to EBU R103-2000 at all colour correction settings. Programme-makers and broadcasters working to non-EBU standards can alternatively set the legalisation levels to their specific regional standards.

The Grand National is an annual steeplechase run over a distance of 4 miles and 856 yards (7,242 metres) with horses jumping 30 fences during two circuits of Aintree's National Course. The race has been held at Aintree each year since 1839, with the exception of 1916-1918 (First World War) when it was held at Gatwick, 1941-1945 (Second World War) when it was called off, and 1993 when the race was declared void owing to a false start. The steeplechase is the centrepiece of a three-day meeting, one of only four run at Aintree in the racing season. It is the most valuable National Hunt event in Britain, offering a total prize fund of £975,000 in 2012.