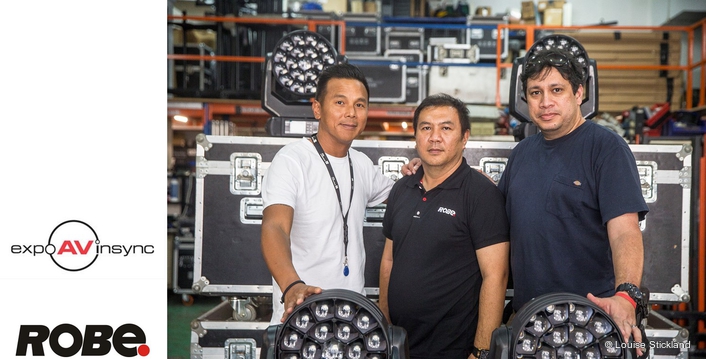 Left to right : Gerard Rodrigues from Expo AV-InSync, Robe Asia Pacific’s Hanslee Lim is in the middle … and Expo AV-InSync’s Desmond Zuarte is on the right

Around 70 per cent of their work is in the conference and MICE sectors and several high profile tech and financial clients and also one of the preferred production equipment supplier to Singapore Expo. Sister company Digital Kitchen Studios creates video content including animations and engages in post-production and video mapping projects. The company designs shows as well as supplying kit and working with independent creative teams.

Currently they have upwards of 200 Robe fixtures in the lighting inventory. When the Spiider was launched last year, it was perfect timing as they were looking for new LED wash lights and loved the Robe LEDWash 600+s that they already own.

“As soon as we knew it was coming out we knew we had to have them,” enthused Gerard Rodrigues who started the company in 2005, “Its super bright, great quality and of course you have the 60 Watt LED beam in the centre … so it’s very versatile”.

He adds that the fixture is expedient on power and well-priced.

The first show for Expo AV-InSync’s 36 new Spiiders was for a sales kick-off event staged in Hall2 of the Singapore Expo. The gig’s LD, Zach Leo, positioned them on the front trusses and they were used for stage and set washing as well as for some effects.

In addition to the new Spiiders, Expo AV-InSync already has Robe’s MMX Spots, Pointes and LEDWash 600+s in rental stock and constant use.

The Robe investments started when the company was founded, with the purchase of six ColorSpot and two ColorWash 575 XTs – fixtures which are still going strong today 12 years later! “The reliability is incredible” comments the company’s technical director, Desmond Zuzarte.

Over the years they have kept up the commitment to Robe. Although a competitor brand was experimented with at one stage, they soon came back to Robe as a better more robust solution and now Gerard declares proudly, “Robe is the only moving light brand here!”

They like the intensity of all the fixtures and the gobos and the animation wheel on the MMX Spots. With the current trend for beam lights continuing, it proved an astute move to go with Pointes, “which are whole lot more than just a beam effect,” says Desmond.

Gerard observes, “Robe is very much the moving light of choice at the moment in Singapore”, and the most recent large shows – National Day Parade, Chingay Parade, the SEA Games Opening Ceremony and others have all featured large quantities.

He adds that after-sales is always a key consideration when choosing brands and he appreciates the excellent and consistent support from Robe’s Asia Pacific team over the years. 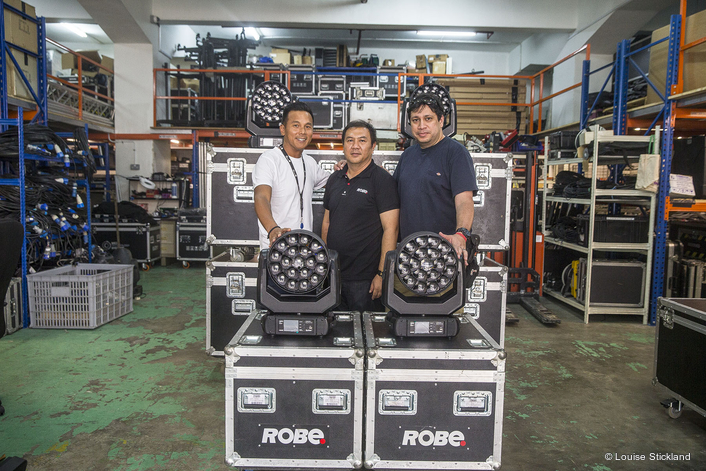 In addition to the new Spiiders, Expo AV-InSync already has Robe’s MMX Spots, Pointes and LEDWash 600+s in rental stock and constant use

Until now, this support has been co-ordinated by Lighting & Sound Distribution Pte. Ltd. “LSD’s commitment to service has been top notch over the years and that was a big reason for us to keep working closely with anything and everything Robe,” confirms Gerard.

Gerard started in the entertainment industry as a house party DJ company. During his National Service he was an Air Force flight engineer and garnered his technical skills fixing airplanes. This was also where he learned about quality engineering! His detachments included Thailand and Australia, a valuable experience that helped him to see what was happening elsewhere. After that he returned to DJ’ing for a stint at the up-market Studebakers, then worked freelance for a series of AV companies before setting up Expo AV-InSync in 2005.