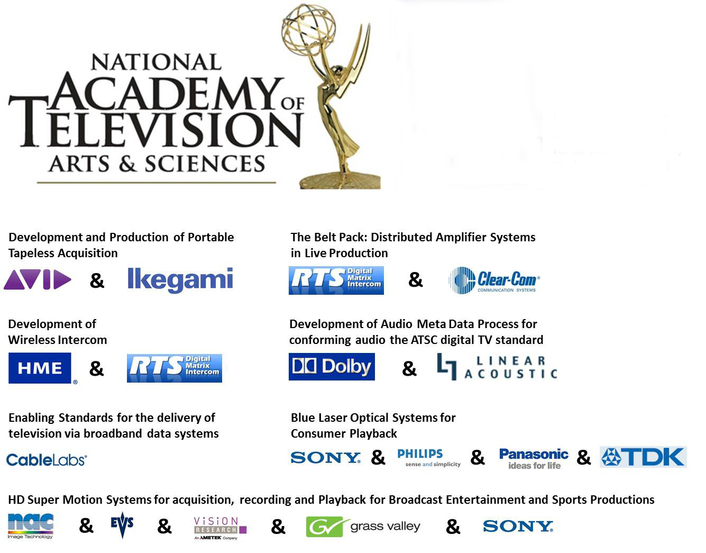 The EVS Emmy award highlights the EVS expertise in live broadcast technologies
EVS will be in the spotlight at the 62nd Annual Technology & Engineering Emmy Awards ceremony to be held Jan. 6, 2011, at the international CES in Las Vegas. The National Academy of Television Arts & Sciences will honor EVS with an Emmy for its HD Super Motion systems for live slow motion replay for broadcast sports and entertainment production.

The National Academy of Television Arts & Sciences (NATAS) has announced the recipients of the 62nd Annual Technology & Engineering Emmy® Awards. EVS is one of the honored winners of the coveted prize for its HD Super Motion systems for acquisition, recording and instant slow motion replay for broadcast entertainment and sports productions. The Emmy will be presented to EVS at the awards ceremony on January 6, 2011 at International Consumer Electronics Show in Las Vegas.

Launched in 1948, The Technology and Engineering Emmy® Awards honor development and innovation in broadcast technology and recognize companies, organizations and individuals for breakthroughs in technology that have a significant effect on television engineering.

The EVS Emmy award highlights the EVS expertise in live broadcast technologies with its production servers that can be combined with advanced controllers to provide the sharpest solutions for live slow motion replay and fast turnaround editing. EVS technology is used by broadcasters across the globe and is recognized as a world leader in live slow motion replay. EVS servers, based on the unique loop recording technology, allow multiple HD audio/video feeds to be recorded simultaneously and played back instantly. Its renowned LSM remote controller guarantees reliable and top quality replays in high definition with frame accurate sensible control of HD camera and Super Motion camera systems.

“EVS is very proud to receive the Emmy Award. The company has expended a great deal of time and effort in designing and developing servers that meet the needs of the most complex broadcast environments,” says Fred Garroy, General Manager of EVS Americas. “EVS’ HD super motion systems are a benchmark in terms of quality and reliability. This award shows that our work has been recognized and approved by the broadcast and production community worldwide.”

The XT[2]+ server is an instant-access, disk-based video server with up to 6 in-out channels capable of simultaneous recording and playback. This tapeless production server is the foundation of a fast, reliable, and comprehensive broadcasting solution: users get the combined benefits of shared access to multiple video feeds, customizable and searchable metadata, and integration with third-party editing and finishing environments. Finished sequences are transferred back to the XT[2]+ and can then be played out to broadcast or sent to other distribution methods.

The XT[2]+ easily records, controls, and plays out media quickly and intelligently in live and near-Live environments, and allows multiple users to work simultaneously and instantaneously in network (from everywhere to anywhere), even while ingesting. The XT[2]+ native integration with all third-party tools drastically reduces wasted time.

With the integration of the new DualPower technology, the XT[2]+ server can now be instantly configured for live 3D or 1080p operations, offering 4 effective in/out channels. 3D/1080p recording and playout can be managed in single link mode, based on 3Gbps connection, or in dual-link mode as 2 synchronized 1.5Gbps connections. In addition, the XT[2]+ platform offers the first-ever live 3D SuperMotion control, available for high-end live 3D replay operations.

EVS Broadcast Equipment is a leader in the design of hardware and software for the production and playout of sport, news and TV programs in both live and near live environments. Its innovative Live Slow Motion system revolutionized live broadcasting, and its instant tapeless technology is now widely used in nonlinear editing and High Definition Television the world over. The company sells its branded productsand integrated tapeless solutions in over 90 countries and is able to provide services in any region. EVS is headquartered in Belgium and has offices in Europe, the Middle East, Asia and North America.