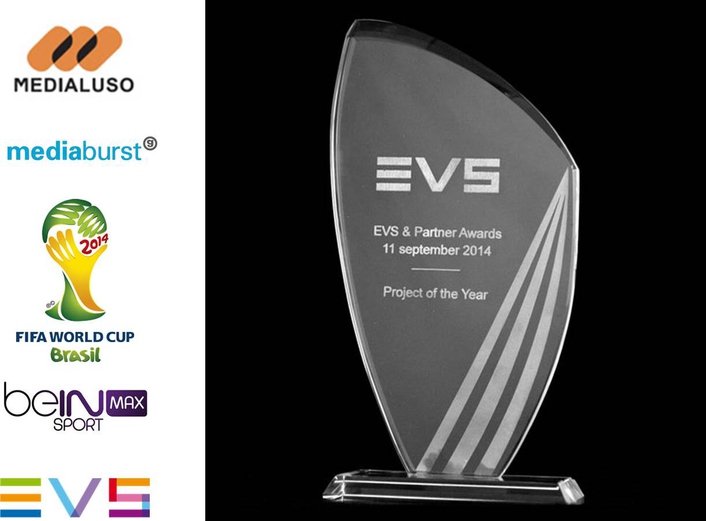 Recognition for the beIN MAX news production centre and the beIN Sports IBC in the World Cup
Media Burst/Medialuso picked up the IBC2014 EVS & Partner Award for the two best projects of 2014 in the EMEA region for the joint development and execution of the beIN MAX and IBC projects for the 2014 FIFA World Cup.

Media Burst was responsible for the engineering, installation and set-up projects for the audiovisual infrastructure whilst the operation of the project was carried out by Medialuso. The two projects were designed for the sports network beIN Sports. Over the course of the Football World Cup in Rio de Janeiro in the beIN MAX centre more than 180 hours of raw material was filmed and more than 1,700 video clips were produced.

The WC2014 IBC was set up in Rio de Janeiro to cover the beIN Sports broadcasts over the course of the 2014 Football World Cup. The centre occupied 300m2 and was equipped with 8 Grass Valley LDK 8000 cameras and a Kahuna 3M/Es mixer. The PAM system was the system chosen for the EVS IP Director with 8 servers XT[3]/XT[2]+ with a 24 input capacity and 12 simultaneous play-outs, a central warehousing system with a 2,400 hour 120Mbps capacity, 15 Avid Media Composer editing stations, 4 live editing stations and 6 commentary positions.