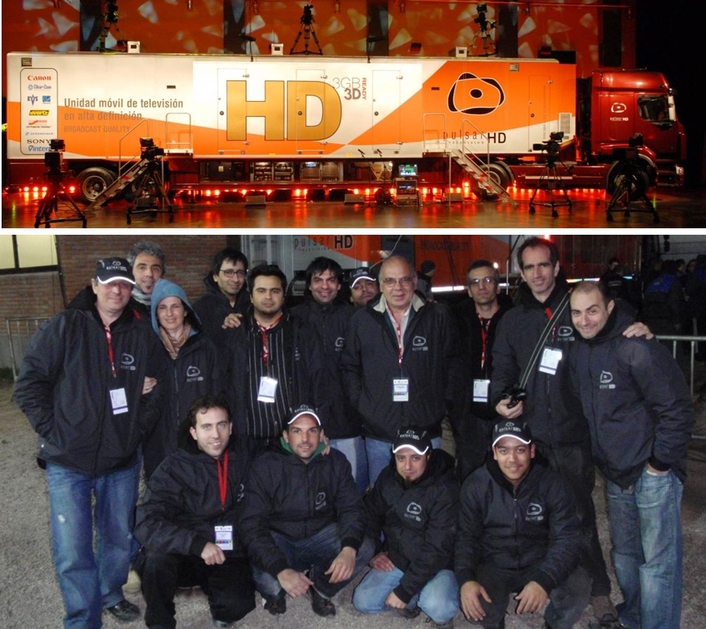 Pulsar Freedom HD Truck and the Pulsar Team
Pulsar TV, a service provider based in Argentina has launched Freedom, a 3G/3D Ready mobile truck using EVS Technology. This new mobile unit is the first of its kind in South America. It will broadcast various live events in high definition.

“We are very pleased to inaugurate the first 3G/3D Ready mobile truck in this country, says Gonzalo Pampin, owner of Pulsar TV. “With Freedom, we chose the best and latest technology to make a State Of The Art mobile truck that will pave the way for future HD and 3D productions in Argentina. Our partnership with EVS and the reliability of their equipment has helped us in this enterprise/massive undertaking.”

“It is very important for EVS to be part of this project,” says Benjamin Mariage, EVS Sales Manager for Latin America. ”We have worked closely with Pulsar for a long time and we are very proud to be a part of this project, bringing HD and 3D not only to Argentina but also to all of South America.”

Freedom was inaugurated in September, during the 2010 Women's Hockey World Cup in Rosario; it was the first High Definition transmission in the country. Indeed, the OB van will be broadcasting to the world in High Definition live events, such as concerts and major sporting events, including the Polo Open in Buenos Aires and the 2011 Copa América.

EVS Broadcast Equipment is a leader in the design of hardware and software for the production and playout of sport, news and TV programs in both live and near live environments. Its innovative Live Slow Motion system revolutionized live broadcasting, and its instant tapeless technology is now widely used in nonlinear editing and High Definition Television the world over.
The company sells its branded products in over 70 countries and is capable of providing services in any region. EVS is headquartered in Belgium and has offices in Europe, the Middle East, Asia and North America.