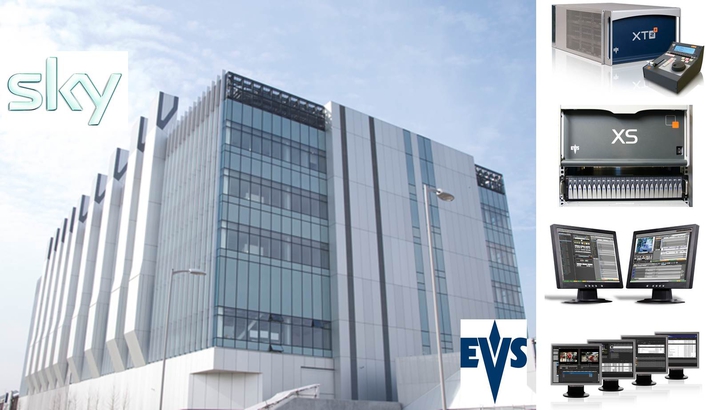 The new Sky Sports HD production infrastructure, relying on EVS Instant Tapeless Technology, will lead to significant operational improvements in terms of quality and consistency of the day-to-day sports highlights coverage, but also in terms of output abilities on TV and new media platforms.

EVS will also equip the entire Edit Control Room (ECR) at Sky Sports for new media production and delivery. The ECR workflow will rely on ten XS servers operated for ingest and play out, and controlled by the IPDirector content management system. Recorded media, clips and edits will be shared in a central near-line storage system, the EVS XStoreSAN, which provides 20TB storage capacity, including proxy media. A total of eighteen EVS Xedio CleanEdit stations will be used for the creation of highlights packages (including graphics) with direct access to the central storage platform. Once finalized, EDL’s from the Xedio CleanEdit editors will be sent to the XS servers for HD conforming and direct play out.

EVS tapeless systems will also be implemented for Sky Sports’ SportaCabin, a production area dedicated to live and near-live highlights editing for the Premiership and UEFA Champions League. The production will be supported by eight XS servers, eleven HD Xedio CleanEdit editing workstations and eleven IPEdit on-the-fly editors for halftime and post-match analyses.

Darren Long, Director of Operations at Sky Sports: “The real benefit of having a new HD tapeless infrastructure covering ingest, edit and playout is that you can maximise the use of content throughout different platforms very quickly and efficiently. EVS, with its expertise in live productions and sport broadcasting, has demonstrated the value of its tapeless technology and proven on more than one occasion that it can meet the challenges of such an important project”.

This new EVS workflow has been developed to offer optimized integration with third-party tools, such as NRCS, MAM, archiving, automation and graphics. The new system provides full communication between EVS content production tools and Avid’s iNEWS newsroom system, allowing play out from the XS server to be automated from the iNEWS rundown interface. Thanks to the full transparency between the systems, completed Edits and media can be easily transferred from the MAM to the XS servers for playout with EVS’ MPlay remote controllers.

Mike Snell, EVS Sales Manager for the UK, Ireland and Israel, says: “EVS is honoured once again to obtain the confidence of a leading European sport broadcaster. The successful collaboration between Sky Sports and EVS has strengthened with each new challenge, as we continually aim to maximize the use of content by increasing the efficiency of production operations and tapeless workflows”.

EVS Broadcast Equipment is a leader in the design of hardware and software solutions for the production and playout of sport, news and TV programs in both live and near live environments. Its innovative Live Slow Motion system revolutionized live broadcasting, and its Instant Tapeless Technology is now widely used in nonlinear editing and High Definition Television the world over.The company sells its branded products in over 70 countries and is capable of providing services in any region. EVS is headquartered in Belgium and has offices in Europe, the Middle East, Asia and North America.