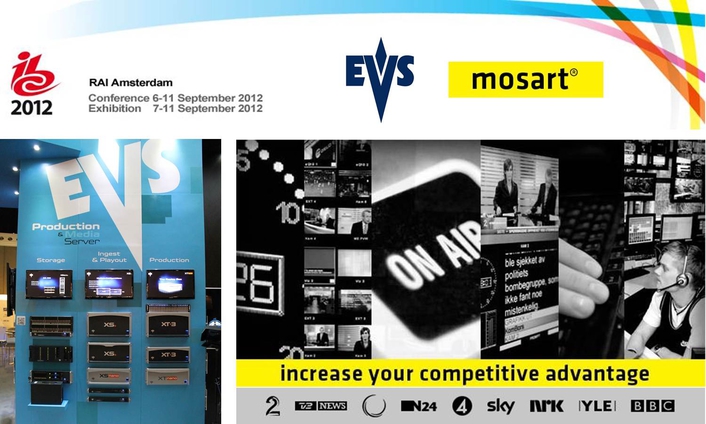 Taking advantage of the power of the LinX API in the EVS XT/XS series production servers, the Mosart interface makes it possible to offer newsrooms a range of automated processes – from advanced clip management and display configurations to automatically adding metadata to clips.

The API command interface also enables automated playout control of the EVS servers, and even means that content from one server can be played out on a different server. This means that together EVS and Mosart take care of processes that traditionally hinder most news productions, enabling directors to be freed up to produce better newsroom broadcasts for their partners and customers - and ultimately keep their viewers engaged with up-to-the-minute dynamic content.

“We built our XT/XS series production servers with the LinX API to provide complete scalability and flexibility, allowing third-party developers to create new applications and solutions for our broadcast and production customers,” said Pacôme Palfroy, product manager, at EVS.

“We’re really impressed with the API development work that Mosart has integrated into production workflows on our servers. Mosart has put advanced server controls at the fingertips of directors while reducing the time it takes to manage those workflows. It is a brilliant solution to further optimise our XT/XS series production servers, which already offer a comprehensive array of next-generation automated news processes.” he added.

John Kjellevold, CEO at Mosart declared: “With EVS having a large customer base in sports, Mosart 3.0 is the perfect fit for its servers as it’s been designed to handle sports even better than before. Mosart provides the ability to define advanced shortcuts, leave run-down and easily switch remotes, graphics and cameras. By adding EVS to our lists, we’ll now be able to control most of the servers in a broadcasting environment, which is important for us as a company with an “open philosophy”. Our aim has always been to control all the major video servers.”

“The integration with EVS was based on customer demand and we aim to develop the integrations that customers ask for, and by doing so, we’ve been able to extend the range of third party hardware controlled by our automation system.” he added.

About Mosart
Mosart Medialab is a subsidiary of TV 2 Norway and one of the cluster of technology spin-offs originating from TV 2, including Vizrt, StormGeo, Vimond, and Wolftech. Mosart Medialab develops and markets the Mosart® automation system for news, sports, weather, and live broadcasting applications. Conceived in 2002 at TV 2 by professional news directors, producers, and editors, Mosart meets the demands of live production by simplifying workflow and control, eliminating operational errors, and providing a highly flexible environment for ad hoc operation. High-level gallery control is combined with a sophisticated user interface, making it easy to override the schedule and improvise when breaking news demands instant response. Open-systems architecture ensures industry-leading compatibility with the widest range of third-party systems. Mosart is used for prime-time shows and 24/7 operations by major broadcasters. Mosart is Europe's market leader in studio automation. ARD, BBC, SKY, N24, TV2 Denmark, SVT, YLE, Global TV, and NRK are a few of its customers.