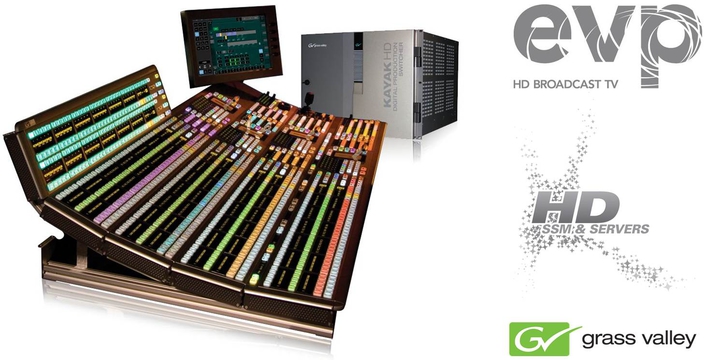 EVP placed the order for the Kayenne XL/Kayak HD combo in March 2011. The new truck will be on the road in October
Swiss facilities company EVP has ordered a Grass Valley™ Kayenne™ XL switcher control panel with a Kayak™ HD switcher frame  for its new mid-sized outside broadcast truck. The 2.5 M/E switcher will be integrated into EVP’s 10 camera truck currently under construction, which will be ready to go on the road later this year.

Meeting the space requirements of the new truck, the switcher includes a 48 input frame and 2.5 M/E banks. The Kayenne XL panel’s modular flexibility will allow EVP to configure and adapt the switcher to any kind of production—based on specific production requirements—ensuring that operators have the production power expected in today’s live sports, music, and entertainment events exactly where they need it.

To allow archive material to be seamlessly integrated in live productions, the switcher incorporates built-in up/down/crossconverters on inputs and outputs, minimizing the amount of outboard equipment required.

“There are plenty of large outside broadcast trucks in Europe, but we saw the need for a compact, fixed-axle HD unit that would be able to get out and about in the cities and villages of Switzerland,” said Louis-Pierre Roger, General Manager of EVP. “By making it easy to get to locations, we anticipate receiving a great variety of work, so we needed a very flexible switcher—and we believe that the Grass Valley switchers are simply the most flexible on the market.”

“Grass Valley production switchers are acknowledged the world over as the standard for outside broadcast use because of their huge creative power and how familiar they are to many operators, staff, and freelancers,” said Scott Murray, Senior Vice President, Live Production Solutions for Grass Valley. “We developed the Kayenne XL switcher control panel, in response to our customers who told us that they wanted more power and flexibility with their Kayak switcher frames, which is exactly what EVP wanted and what they received.”

EVP placed the order for the Kayenne XL/Kayak HD combo in March 2011. The new truck, which is being built in Italy, will be on the road in October.