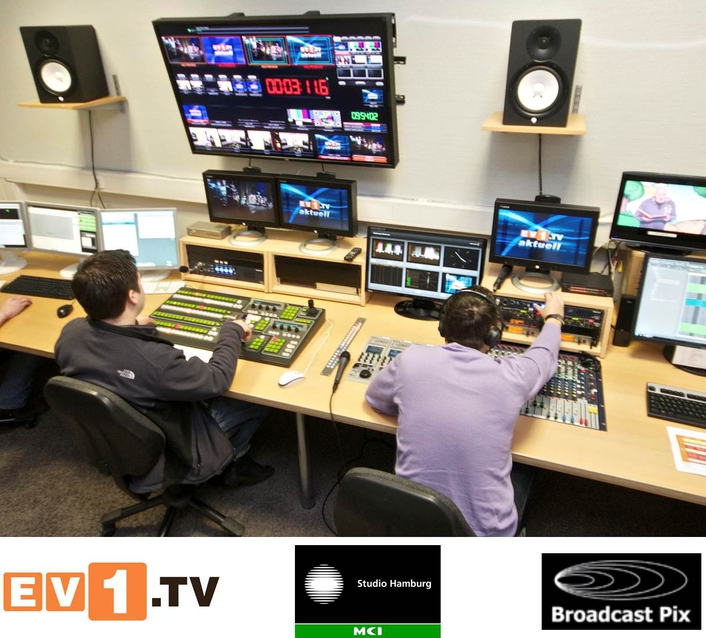 “In fact, everything you see on ev1.tv is produced with Granite or Slate,” said Nico Stähle, chief engineer for ev1.tv, which distributes its programming via cable and online. The new Broadcast Pix systems were purchased last summer through Studio Hamburg Media Consult International (MCI), which handled the Granite installation (Stähle installed the Slate in the production van).

Stähle said he chose Granite because he needed a 2 M/E mixer that was easy to operate. “For us, there’s no other bundle of hardware with the cost effectiveness of Granite or Slate,” he explained. “We can operate all components from the panel with no need for other external equipment. Plus, Granite fits perfectly in our workflow with our Final Cut Pro workstations.”

ev1.tv uses a number of Fluent™ built-in workflow tools in both systems, including the animation store and Harris CG to create animated lower-thirds. Fluent-View is used to display all sources and keys on a 52-inch LCD monitor in the control room, and Stähle appreciates the “attention to detail,” such as the integrated clock in the display.

“We do a lot with Fluent Macros,” Stähle added. “For example, for the open of our news show, the intro starts and automatically fades to the camera in the studio, the lower-third appears, fades away, and cuts to another camera. We also use a macro for the end of the show to display a crawl and other titles on an animated background.”

Programming is currently produced in SD, but Stähle noted there is no problem upgrading to HD or a mixed HD/SD production environment with Granite. With several months of productions complete, he said the Broadcast Pix systems have performed very well. “No problems at all,” Stähle said. “It is so easy to operate that, with the help of some macros, even our trainees can run a news show.”