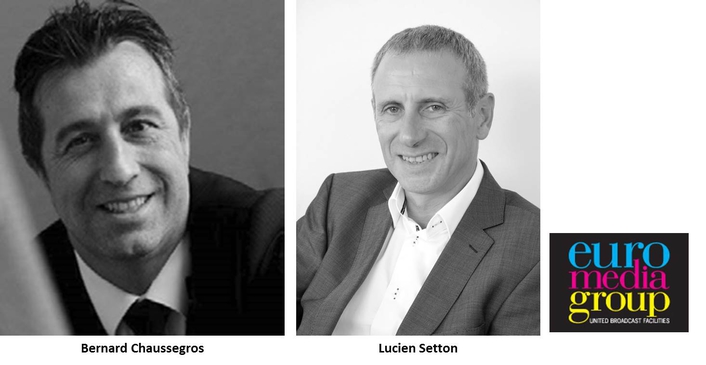 Lucien Setton joins Euro Media France as Deputy Managing Director in charge of operations. « Lucien has more than 25 years of operational experience in the broadcasting industry » stated Thierry Drilhon, Chief Executive Officer of the Euro Media Group. « He will be specifically in charge of implementing the company’s global corporate strategy in France, accelerating our transformation, improving growth & profitability and optimizing services to our customers» he added.

Lucien Setton began his career at TDF, where he held various leadership positions over the past 17 years and in particular, Deputy Managing Director of TDF Radio Services, Managing Director of France Télécom Reportage and Deputy Director of Innovation.
In 2003 he was nominated CEO of Visual TV and since 2006 was leading outside productions for TF1.

Lucien graduated from the Ecole Polytechnique, Telecom Paris and holds an Executive MBA from CPA.

Bernard Chaussegros, formerly president of Euro Media France, is nominated Vice President, Special Adviser to the CEO of the Euro Media Group.
Thierry Drillon indicated: « Bernard will support me in the development of the group, with corporate relations, business development with major customers as well as real estate projects »

Bernard Chaussegros has significant career achievements in corporate development and namely in broadcasting. In 2000 he joined Euro Media Télévision and as a shareholder he was involved in the SFP, VCF and DVS acquisition processes. From 2007 onwards he continued the external growth policy that lead to a merger with the UBF group, the buyout of the TPX group in 2008 and the recent acquisition of the Italian company, 3ZERO2.
Bernard Chaussegros, 50 years old, is a qualified chartered accountant and holds an Economics Degree from Arts et Métiers.

Furthermore, Thierry Drilhon, CEO of the group will also become President of Euro Media France a strong priority for the group development.
« These major changes within our organisation should enable us to step up our transformation through the strategic planning process. Our objective is to adapt our business activities faster and increase our customer’s relationship, concluded Thierry Drilhon.

As the European industry leader, Euro Media Group is present in 7 countries: France, Belgium, Netherlands, Germany, UK, Switzerland and Italy. The group provides its clients with a complete custom-made solution for the production and delivery of all Media content from broadcast through to on-line. As a technical integrator, the Group is active across the entire production process, handling every aspect from filming though to content delivery.
Today, Euro Media Group is one of the few independent providers in Europe known world-wide for its technical expertise. Focused on new media, Euro Media Group is recognized for its wealth of experience in international sports, live performances and entertainment production. Offering a large range of services, advanced knowledge in technology and a strong ability to innovate, the Group provides clients with its specialist knowledge, delivering a high quality service.
The Group owns the largest range of studios (92 stages) and 74 mobile units, providing its customers with the greatest collection of studios and fleet of mobile facilities in Europe.