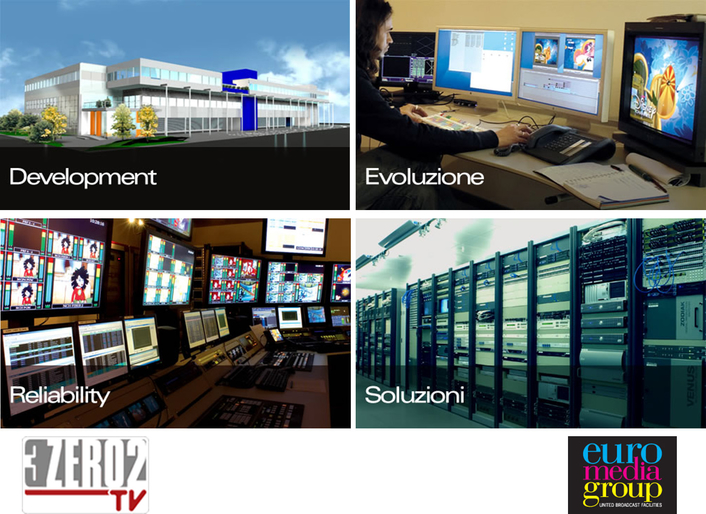 3Zero2 provides contents for television, technical recording, studio, pre-and post-production services and broadcasting
After France, Belgium, the Netherlands, the United Kingdom, Germany and Switzerland, Euro Media Group, the market leader in audiovisual and cinematographic services in Europe, has added a 7th string to its bow with a presence in Italy. By acquiring 3Zero2, the Group has strengthened its presence in the Mediterranean basin and is developing its content management services (Play Out).

Among other things, 3Zero2 benefits from a contract for the rebroadcasting of Italian soccer championship matches, the Calcio, and an agreement with The Walt Disney Company Italia s.r.l. for the provision of services linked to the organisation, production and broadcasting (Play out) of the 12 Disney channels within Italy.

The current team, consisting of almost 80 employees and directed by Mario Rasini and Piero Crispino, will continue to manage the company as an autonomous entity within the Euro Media Group.

Play-out:
3ZERO2 has already been broadcasting the Disney Channels within Italy for several years. At present, 12 channels are broadcasted from 3ZERO2’s “High Tech” centre.

Studios:
3ZERO2 has 3 stages of 300, 400 and 600 m², equipped with 2 SD fixed control rooms, located at Cologno Monzese (on the outskirts of Milan, close to those of Mediaset). 3ZERO2 occasionally rents large studios of 900 to 1000 m², in order to meet the needs of its clients, notably the Mediaset and Rai networks.

Post-production:
3ZERO2 has equipped itself with editing and design resources, used for important broadcasts of variety shows which require very sharp image and sound post-production. The company has recognized knowhow in this type of service.

Mobile units:
3ZERO2 benefits from a 2-year contract for HD rebroadcasting of the Italian soccer championship matches, the Calcio. Since 3ZERO2 does not have its own OB trucks, the Group has assigned one of the units of its French fleet to Italy. At the weekend, the truck is used for the rebroadcasting of matches and during the week, it is attached to the Cologno Monzese studios to record entertainment programmes. If available, it operates in the South of France to record French championship football matches (in Marseille, Nice, Monaco, etc.). These synergies have allowed 3ZERO2 to position itself in a market in which it did not operate, and Euro Media Group to optimise the use of its fleet of OB trucks.

Established in 2002, 3ZERO2 TV is the dynamic and flexible expression of a sector in continuous evolution, a company which has developed and established itself over the course of just a few years to become one of the most cutting edge realities and one of the most active in the use and implementation of new technologies, with its current plurennial contracts confirming a steady growth

Euro Media Group, the market leader in audiovisual and cinematographic services in Europe, is present in 7 countries: France, Belgium, the Netherlands, the United Kingdom, Germany, Switzerland and Italy. Its business consists of producing and managing audiovisual content on behalf of its clients. The Group has developed its activity as a technical audiovisual service provider by seeking to control every stage of the production cycle, processing and transmission of images. Today, it is one of the very few independent service providers in Europe to offer high technology technical services, both for recording of signals (image and sound) and for their management. Euro Media Group has the largest pool of studios as well as the most extensive fleet of mobile units in Europe.