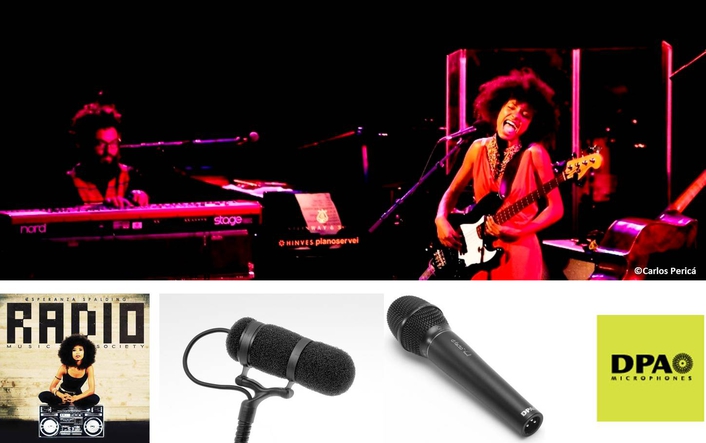 Jazz Artist Esperanza Spalding Chooses DPA’s d:facto™ Vocal Microphone For All Her Live Vocals
Bassist and vocalist artist Esperanza Spalding is currently touring with her new project Radio Music Society with a set-up of DPA microphones, including the new DPA d:facto™ Vocal Microphone that she is using for her vocal performances.

Esperanza Spalding draws upon many genres in her own compositions and has garnered numerous accolades for her musicianship and smooth, experimental sound. In 2011, she won a Grammy for Best New Artist, becoming the first jazz musicians to do so, and her career also includes collaborations with great artists like Wayne Shorter and Joe Lovano.

Jaime Armengol, who works as Esperanza’s sound engineer, chose DPA microphones for her 2012 tour because he was already well aware of the sound quality he could achieve with the brand.

He says: “We are using a full range of d:vote™ 4099 Instrument Microphones and have employed them on piano, upright bass and saxophone. They are really great and are giving incredible results that everyone is very happy with.” 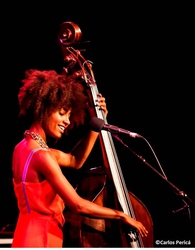 Jaime is also delighted with the performance of DPA’s new d:facto™ Vocal Microphone – and he’s not the only one.

“To begin with I didn’t tell Esperanza that I had changed her microphone, but when we started sound checking she said ‘what did you do with my vocal? It sounds much better and more natural’,” he explains. “After that we decided to make the switch to the d:facto™ and Esperanza is now using it for her vocals during this year’s touring.

“It is a very clean microphone, which is typical of the sound you expect from DPA. I usually use a channel strip (first brands like Universal Audio, Empirical Labs, Millennia, Avalon etc) and the clarity at all frequencies is really impressive. The frequency response cuts the lows appropriately and it has a nice HF boost. It is evident that its capsule comes from one of the best mics ever – the DPA 4011 Cardioid Microphone. I was really impressed with the optimized proximity effect and so far I have not had any problems with feedback or pop and handling noise. I also liked the linearity in frequency and phase and the impressive off-axis response. It is a powerful microphone and DPA has done a really good job!”

DPA’s hand-held d:facto™ Vocal Microphone, which was launched earlier this year at Pro Light + Sound, bridges the gap between live stage performances and studio recordings. Offering an exceptionally natural sound, high separation from nearby sound sources and extreme sound level handling, this microphone is ideal for live music performances as it combines a supercardiod pattern with superb definition to give high separation and true sound color on stage. In common with all DPA mics, d:facto™ features superior gain before feedback, while the inbuilt 3-step pop protection grid effectively removes unwanted noise.

“Esperanza enjoyed the d:facto™ from the first minute she used it – and so did I,” Jaime Armengol adds. “Being able to use it on this tour is a wish fulfilled for me.”