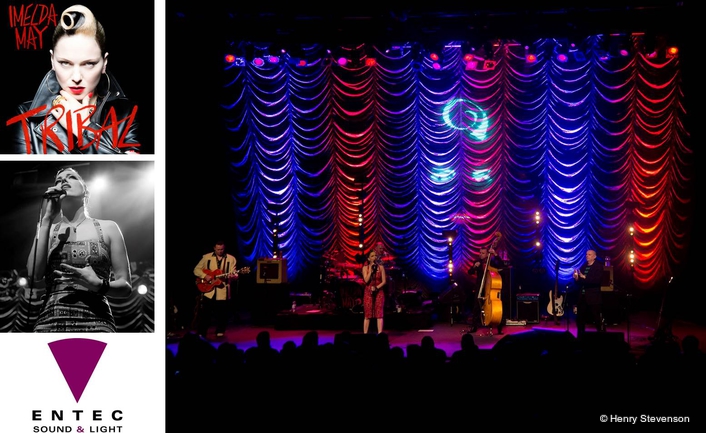 .
Lighting designer James O'Neill enjoyed working with rental company Entec so much when they supplied an Imelda May one off St Patrick's Day gig for him at London's Roundhouse earlier in the year ... that they were his company of choice to supply a dynamic floor lighting / specials package for the latest tour which has been out for six weeks around Europe and the UK.

"When it was clear that we would be taking production on this tour, I went straight back to Entec!" explained James, who was delighted to be back working with Entec’s Noreen O' Riordan and Pepper (Paul Schofield). “Once again they have been amazing!" he declared.

James has worked with the popular Irish singer / songwriter since 2010, in which time her profile and fan base has grown steadily. The starting point for the lighting design on this tour was  to make it look interesting and a bit quirky … and it also had to be scalable, as they started off playing clubs and theatres in Europe and then moved up to larger venues in the UK and Ireland. 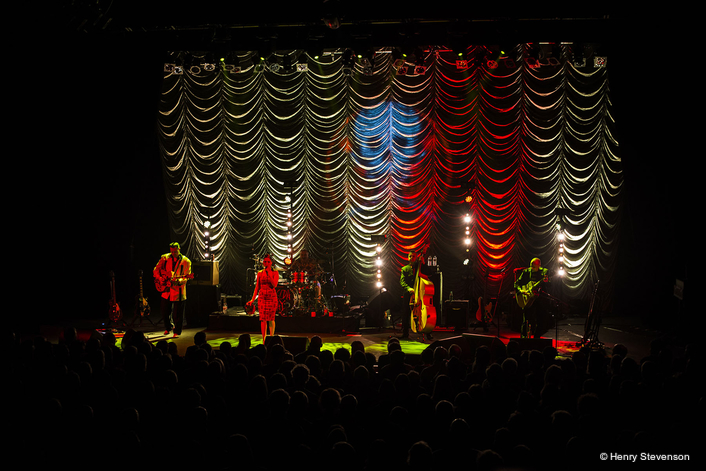 The most important thing was to maintain a continuity in look and style for the show day-to-day whilst also being flexible enough to think on your feet and act organically according to the venue and available stage space, which sometimes required compromise. 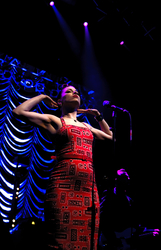 Fully embracing the 'less is more' philosophy, James started off with five upstage floor booms - between 6 and 12 feet in height – mounted in tank trap bases. Each of these was rigged with a Robe LEDBeam 100 and a Showtec Sunstrip clamped to the front at different heights, which were very effective for upstage effects and silhouetting the band.

Five 2-lite Moles were positioned at a height above the band for shooting though into the crowds, which proved great for getting the audience involved in the action.

The pokey little LEDBeam 100s were ideal, while the elegant shape and power of the Sunstrips really opened up the performance space.

Entec also sourced a fantastic shimmering silver / gold drape which was used in the larger venues in place of their own bespoke cloth which was too small for these spaces. It was up-lit with six Robe LEDWash 600s positioned across the stage at its base which accentuated the texturing of the drape beautifully bringing a 3D quality and depth.

To project onto the backdrop, they rigged a single Vari*Lite 3000 spot at FOH which was fitted with a selection of custom gobos including a selection of artwork from the newest "Tribal" album, graphics of May’s trademark quiff and some song titles and lyrics, most of which were chosen together by James and Imelda herself.

For venues offering minimal house rigs, the Entec package also included seven Martin MAC 700 Profile moving lights which were rigged on the back truss, and to control all of this was an Avolites Tiger Touch II with a wing.

James tech'd the tour himself, with Entec’s Pepper on hand to assist at the highly acclaimed London Shepherds Bush Empire show, which featured the ‘full’ touring lighting set up.

He comments that while it has been a real challenge maximizing a small rig, it’s one that he has really enjoyed creatively.

James reiterates that the service, support and enthusiasm from Entec has been "Fantastic in every way", adding that even though they were not directly involved in supplying the gig, Noreen and the team also went "Above and beyond the call of duty" in helping to arrange extra custom gobos for the Dublin O2 show where three VL3000s were added for the front projections.

Noreen comments, “We first encountered Imelda May at the 2013 Larmer Tree Festival where Steve Rayment promised that he would be in contact regarding some dates later that year.

“True to his word Steve introduced us to James O’Neill.   We are very proud of James, he works incredibly hard at every show rigging and maintaining our lighting fixtures as well as utilizing as much of the house systems as possible, and the Avolites Tiger Touch Wing has proved very useful.  Our equipment is treated with such respect it is hard to believe he is ‘flying solo’. 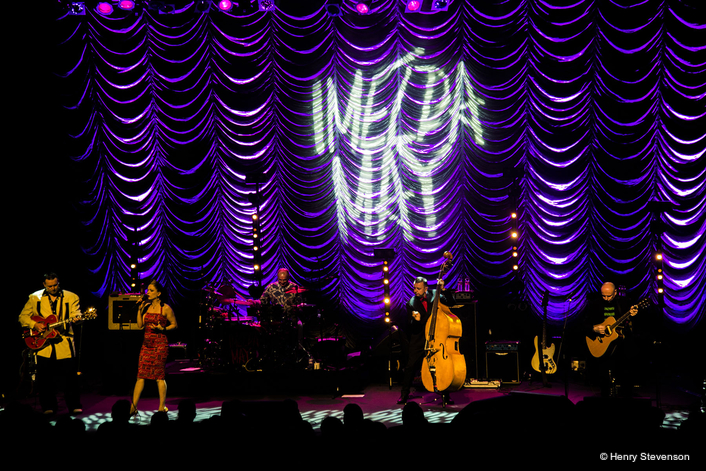 “The current tour is being production managed by Dave Salt who is a welcome blast from our past.  Dave is very organized and a fantastic communicator as well as a master of budget juggling!”