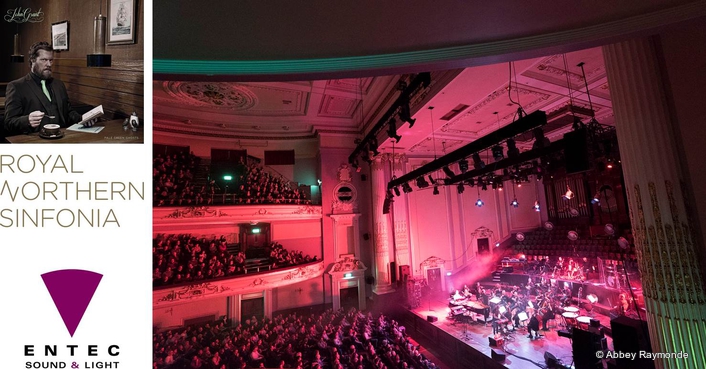 Gabriel has a long-standing working relationship with Entec and so returned to the west London based company again for more excellent service.

He specified a d&b V-Series system with flown V-SUBS and Q-Series as fills. The standard system configuration for most venues was eight V8s a side with two V12s at the bottom of each array, plus four additional ground stacked V-SUBS and a cardioid-mode stack of three B2s each side.

Four Q10-s were utilised for front fills and four Y7s deployed to fill other spaces as needed.

The majority of the venues were concert halls and theatres with relatively good acoustics, so the main task was to ensure that the various richly textured layers of music could be heard cleanly and crisply at every seat in the house.

For the London gig at the Royal Festival Hall, two side hangs, each of six d&b Q1s, were added.

The system was powered via d&b’s proprietary D12 amplifiers throughout.

The two FOH consoles were both Yamaha CL5s, chosen by the respective engineers for flexibility, great sound and their expedient footprints, one running the orchestra and the other mixing the band, both running over Dante. The monitor desk was a Soundcraft Vi6 with no outboards.

Onstage for monitors, Entec provided a pair of M4 wedges and 12 sets of Shure PSM1000 IEMs.

Apart from the conductor, Christopher George, and one cellist who had hard-wired IEMs, none of the orchestra had monitors. However they were wired up with a series of close-mics, mainly DPA 4099s for the strings, 4061s for the woodwind and brass and an eclectic mix of Schertlers, contact and condenser mics – amounting to a total of 96 inputs to the monitor desk.

From the full orchestral mix, specific stem sub-mixes of the main elements were sent to Gabriel’s FOH console, bringing 30 inputs down to eight. 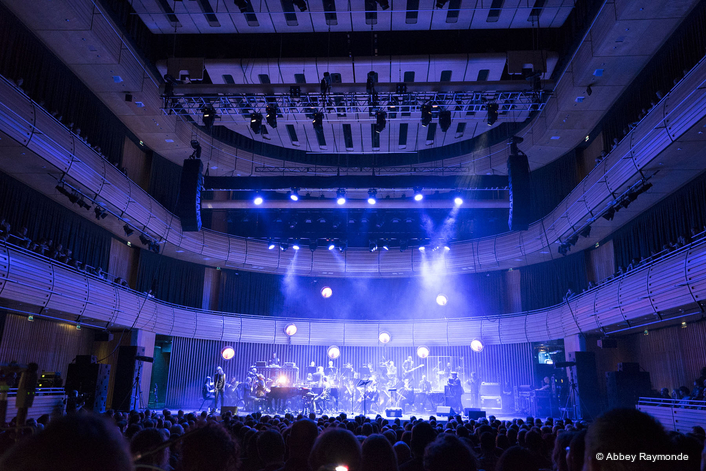 The most galvanising task for the three audio engineers was dealing with gain-before-feedback considering all the open mics onstage, and especially with much of the content having a housey electro beat vibe … and lots of loud low end detail.

Kedge’s extensive knowledge and experience working in the various venues on the itinerary came into its own and helped the team achieve all the acoustic goals and ensure everything ran smoothly on the road.

Mark ‘Magic’ Ellis Cope, Entec’s Head of Sound says, “This was a great tour to prove the flexibility of the systems we can offer. From a control side we could site the FOH consoles either right next to each other at FOH, or we could move the orchestra desk to anywhere in the venue with the help of some near field monitors, so Matt could still generate his feeds for Gabriel to add in to his mix.

“We also managed to fully duplicate the touring PA system and add some venue specific elements to the London show, which meant that the truck not arriving from the previous venue at load-in time was not an issue … and made for a more relaxed day.”

This comprised six Robe LEDWash 600 moving lights, used for back-lighting the orchestra, plus eight Skypans which were mounted on individual stands and deployed around the stage each day as and where they could be fitted according to stage size and layout. These were run on an Avo Tiger Touch console by Aamir.

The theatrical minimalist look worked extremely well for the highly atmospheric set, and they also hooked in to whatever overhead lighting was available at each venue.

Entec’s Noreen O’Riordan who project managed the lighting side of the tour, commented. “It’s a huge compliment to be employed by Gabriele Nicotra, no stranger to our PA Department, who has seen the logistical benefits of sourcing full production from one company … and this tour was no exception.  It ran very smoothly with all departments working in harmony under the guidance of Phil Jackson”.

Entec To The Power of Sev... at the Royal Albert Hall
Entec Lights Imelda May Tour
Entec Supplies Guilfest 2014