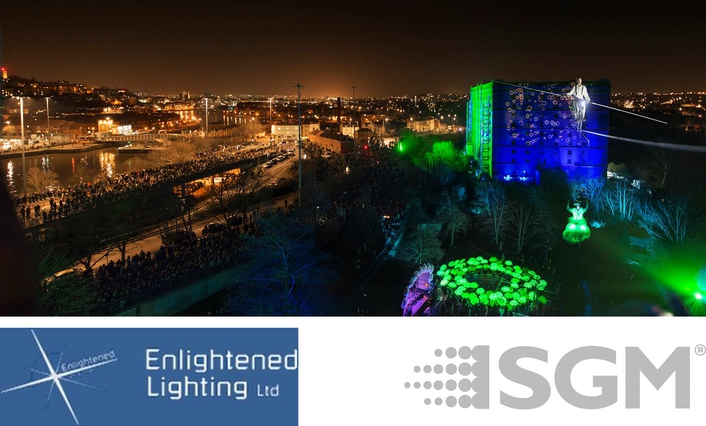 The Bristol-based company, originally set up around 40 years ago, but operating in its current guise since the eve of the new millennium, has purchased 12 of the RGBW IP65-rated washlights, and wasted no time in putting them out on several high profile events around their native Bristol area.

According to production manager Dave Thorpe, “I had seen these fixtures on demo and liked them very much — aside from being stylish and clearly well engineered, I could see how productive they were, with their ratio of high output to low mass and power requirement.

“Although we have other outdoor effects in our inventory we didn’t have anything sufficiently large to light large buildings such as abbeys — or anything as stylish and low profile.” A visit from SGM UK’s Clive Bailey convinced them that this was their best option, and while Enlightened are initially using this with the wide 43° lens they plan to add further versatility by investing in the 15° aperture lens. 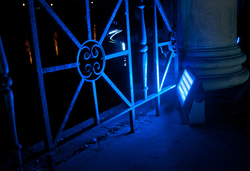 In addition to providing dramatic floods outdoors, the company also undertakes a lot of outside television work in temporary venues where they also provide rigging and power. The P-5, they say, “will also provide a saturated wash without any of the flicker.”

Finally, Dave Thorpe notes that they are extremely user friendly. “I have the SGM Tool app on my phone to be able to configure them wirelessly.”

Working with fellow Bristol lighting company (and SGM P-5 users), Utopium Lighting, they recently supplied all 12 of the fixtures to enable LD James ‘Judge’ Loudon to provide a green flood at the Bristol 2015 European Green Capital launch event (to celebrate Bristol being elected European Green Capital). Here a pair of Cirque Bijou stunt performers, crossed a tiny wire 100ft feet above the ground with no safety harness, running between the CREATE Centre and a nearby bonded warehouse.

The P-5s have already established themselves on other high profile work — including dramatically washing a Bath Rugby Club logo onto the local Pulteney Bridge — while at the Glastonbury Festival this June they will make another eye-catching statement at the landmark Ribbon Tower, the site’s focal point, which will be dramatically lit with Enlightened Lighting’s P-5s.