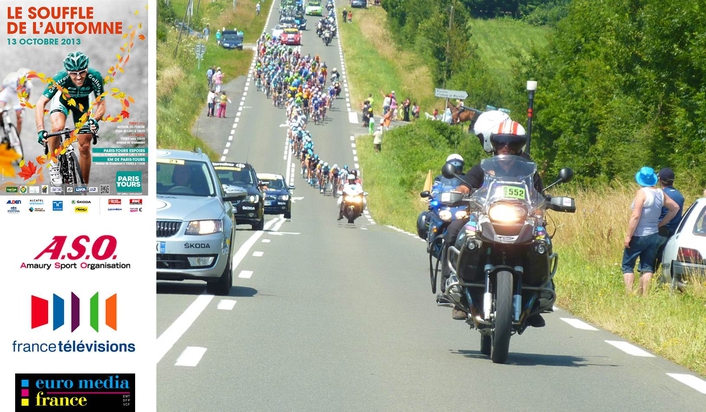 .
Continuing their long tradition of innovation in cycle racing coverage Euro Media France (the pioneering leader in wireless broadcasting), A.S.O. (organisers of the Paris-Tours Race) and France Télévisions (in charge of signal distribution), made history last October 13, by deploying the world’s first wireless sensor solution that enables riders to be geolocated in real time.

Paris-Tours, the final race of the French season, has always been used by A.S.O, France Télévisions and Euro Media France as a testing ground for the latest innovations in cycle race broadcasting. After the world's first wireless digital broadcasts in 2005, HD production in 2006 and 3D in 2009, the 2013 edition of the Paris-Tours event was the first time in-race rider geolocation has been tested.

The 200 riders who started the race in Authon-du-Perche were equipped with special sensors enabling Euro Media France's wireless crews to pinpoint the exact position of every rider, both in the peloton and in breakaway groups, and feed the information to France Télévisions and A.S.O.

Thierry Drilhon, CEO of Euro Media Group and President of Euro Media France said "innovation lies at the heart of our strategy for Euro Media France. By investing in research and developing outstanding new tools, with increasingly enhanced functionalities, we are bridging the gap between the images of today and those of the future."

For Daniel Bilalian, France Télévisions' VP of Sports Coverage "this experiment confirms France Télévisions and A.S.O.’s long tradition in innovation, when it comes to cycle racing coverage. It opens up a fabulous perspective for the development of media coverage of races both for television and other digital media."

Yann Le Moenner, Director General of A.S.O., added "this test is the first phase of development of this promising new data transmission tool, which has numerous potential applications namely in the digital field. These applications will enable viewers to follow and understand races in a completely new way."

Euro Media France is a full service company, leader in TV facilities and solutions for media and broadcast organisations. Offering the largest range of studios facilities (70 sets) and mobile video units in France (27 including 22 in HD), EMF has developed innovative and flexible services by mastering every stage of the production cycle, from pre-production to broadcasting solutions. EMF also provides additional and specialised high-tech services such as New media, RF, super slow-motion, graphics, 3D, content management, playout, engineering and integration. EMF is acknowledged for its expertise in the fields of sports, live or recorded shows as well as variety, games or entertainment shows.
Thanks to the professionalism, expertise and know-how of its teams, Euro Media France has not only gained the confidence of the major broadcasters, production companies and other industry players, but is also became international as a Euro Media Group (Europe’s leading provider) company.