The Vélodrome National in Saint-Quentin-en-Yvelines
Along with soccer and rugby football, cycling is one of the most popular sports in France. This accounts for the creation in Saint-Quentin-en-Yvelines (south west of Paris) of a magnificent new cycling complex. Two years in construction at a cost of some 74 million euros, the new centre was officially opened on January 30th. The heart of the complex is formed by the Vélodrome National – a 4,000-square-meter multi-function hall with a cycle track. In addition to major national and international sporting events, the 4,800-seater hall is destined to serve also as a venue for trade fairs, conventions and concerts.

Naturally, the sound reinforcement system has to be such as to do justice to all these different functions. Further, as French legislation requires, when voice alarm and sound reinforcement systems are combined, they must satisfy the criteria for EN54 certification. In view of these considerations, the choice of solution was almost a forgone conclusion. “Since Bosch, through its brands Electro-Voice, Bosch and Dynacord, is the only manufacturer in the world capable of offering voice alarm systems that include pro sound components with EN54 certification, the hall operators and Tech Audio’s system integrators naturally opted for Bosch”, explains Jean Marandet, Product & Service Manager with the French distributor, EVI Audio France. 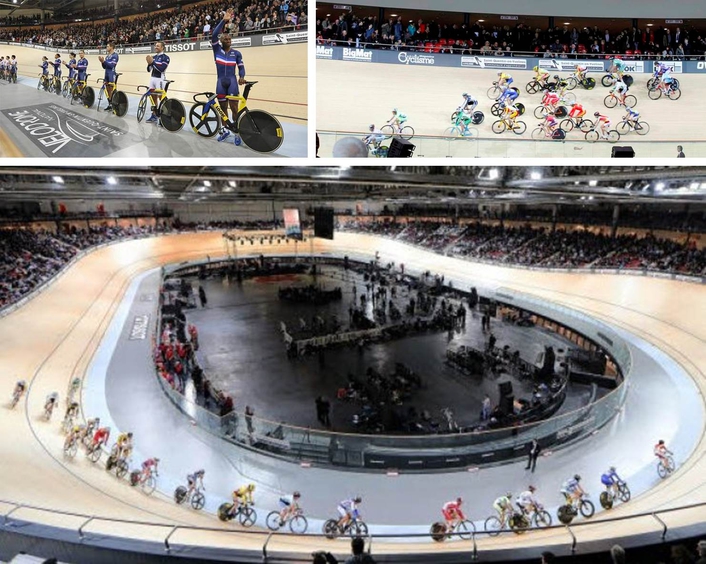 In the original invitation to tender, the Vélodrome’s technicians wanted two separate systems – and alongside the EVAC system, specifically a line array to meet the pro sound needs of the stadium. This plan, however, was discarded after various discussions with acoustic engineers. “In view of the architecture of the building, a line array would have been a poor choice,” agrees Marandet. “The best coverage here is that afforded by multiple distributed loudspeakers.” After extensive EASE room simulations, Electro-Voice systems were chosen for this task, a further argument in their favor being Bosch’s vast experience in the field of stadium installations – particularly of EN-certified combined pro sound and EVAC systems. The installation here was performed by Tech Audio, which is based in St Denis.

The bulk of the sound reinforcement system installed by the team led by Tech Audio’s MD Joel Giazzi and his team comprises 32 horn-loaded EVF speaker systems from Electro-Voice’s Innovation series. “This series is ideally suited to such installations,” says Marandet. “and by choosing loudspeakers with the optimal dispersion characteristics, it is possible even in acoustically problematic rooms to achieve homogeneous coverage and minimize the impact of room reflections.” 18 EVF1122S loudspeakers with dispersion patterns of 90° x 60° and 90° x 40° in the Vélodrome National cover the grandstands and 14 90° x 60° EVF 1122S/96 loudspeakers serve the interior.

The 5,000-seater stadium provides a venue not only for cycling events but also concerts, trade fairs and conventions

The entire system is controlled and supervised using IRIS-Net software, which, in the view of Marandet, forms the heart of the system: “Thanks to its graphic interface and its multiple, individual EVAC-specific functions; this software makes a decisive contribution to the simplicity and user-friendliness of the system. Each customer has its own requirements, so in the setting-up, programming and display of an alarm and evacuation system by means of IRIS-Net, good technical support is of crucial importance.”

For the sound equipment serving the passageways, lounges and restaurants, the Tech Audio team also relied on equipment from Bosch. Over 260 LC1-WM06E8 ceiling loudspeakers, 66 LBC3018 metal-enclosure loudspeakers and 70LP1-UC20E sound projectors from Bosch are used here. They are controlled by a Bosch LBB 1965/00 Plena message manager.

“The installation has surpassed the expectations of the customer,” reports Marandet. “The speakers combine outstanding intelligibility when delivering announcements with all the sound pressure required for music reproduction – not just in the arena but throughout the entire complex.” The President of the FFC, the French cycling association, David Lappartient, is also delighted with the overall result: “Association football has Clairefontaine, Rugby has Marcoussis; and now cycling has Saint-Quentin-en-Yvelines.”

About the Vélodrome National
On 30 January 2014, a large cycling complex opened in Saint-Quentin-en-Yvelines. Besides the Vélodrome National, the 10,000-square-meter centre includes a covered BMX track as well as several lounges and restaurants. With its stylish modern architecture, the Vélodrome National is capable of seating 4,800 spectators. Two hundred and fifty meters long and eight meters wide, the track will be used for national and international cycling competitions and the hall itself to stage, in addition, not only other sporting events but also trade fairs, conventions and concerts.