Elation Satura Spot LED On the Road with Travis Tritt 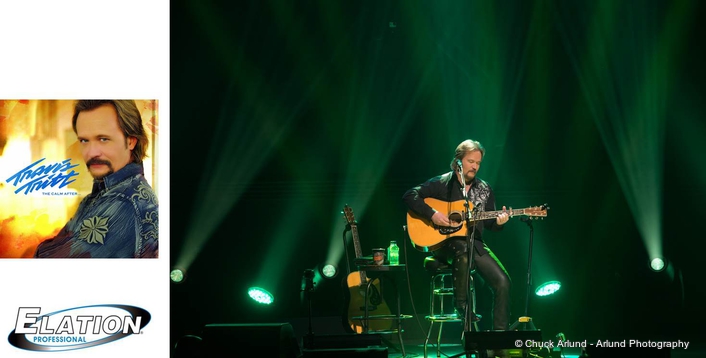 .
Derek Parker has handled lighting design for country music singer Travis Tritt for seven years and after years of using discharge spot fixtures on a steady regimen of shows, now enjoys the benefits that the 300W Satura Spot LED Pro moving head from Elation Professional brings.   “I originally stepped into the LED world for the power savings,” Derek states, “but then I started to really like the brightness of some of the LED spots that are coming out, especially the Satura Spot, and decided to use them on the show.”

Road warrior
Tritt is a multi-Grammy and CMA award-winning artist and plays anywhere from 80 to 100 shows year in and year out. His latest outing started January 10th with a series of acoustic shows before getting the full band involved February 28th for a run of shows that has him touring through September and likely longer. 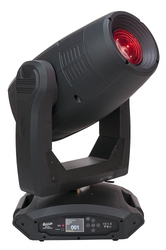 Power and power savings
Although he enjoys the Satura Spot LED’s brightness, Derek says that the power savings was the biggest factor in his decision. “Many of the places we play are outdoor festivals and instead of having twin pack generators to run off like back in the day, we only have 100 amps so we’d have a choice to make, either cut half of the conventionals in the rig to use some moving lights or cross my fingers and hope the generator breaker didn’t go. Now I can put three Satura’s into a 20 amp circuit and it runs flawlessly.”

The 300W Satura Spot LED Pro is as bright as a traditional 575W discharge fixture yet consumes half as much energy. Its long-life LED engine lasts on average 80 times longer than a 575W discharge source. On Travis Tritt, Derek uses the Satura Spots from an upstage and midstage position for everything from backlight to lighting up backdrops and even improvises at times by using them as an ellipsoidal to pick up solos. Some fixtures also worked from a floor position on Tritt’s acoustic shows.

Hold their own
“Really the whole fixture was a surprise to me and I’m getting more out of them than I thought I would,” Derek says of the LED spots, which he owns due to the economic benefits over renting for an artist like Travis Tritt, who spends the bulk of the year on the road. “I’ve seen a few other LED spots out there that just didn’t have punch but to have a true 4-color light engine that is additive instead of subtractive really keeps it strong. Even when I put the Satura up against a 575W light, it makes the 575W fixture look dim, and when we play venues that have Sharpy’s, they don’t disappear. I was also surprised with the focus and the zoom on it is really good. You can get real hard edges out of it. They really hold their own and do what I want them to do.” Derek purchased the fixtures through Michigan-based Fantasee Lighting. 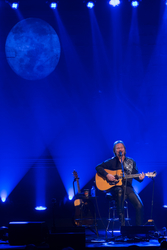 More like a rock show
Derek earned Tritt’s lighting design trust years ago and enjoys the freedom that it brings. His design for the current outing is more like a rock show, he says, describing Tritt’s music as closer to southern rock than pure country. “He plays his ballads and country hits but his music also has heavy guitars and drums, which takes me back to where I started with Blackfoot. With Travis, I use lots of movement and my color range is everywhere from white to green. The green in the Satura is great, the red is really strong, and the white is a true white. The gobo selection is also nice.”

The Satura Spots aren’t the only Elation fixture in the rig however and not Derek’s first Elation LED fixture either. Four Elation Design Wash LED Zoom fixtures also grace the upstage truss with four more midstage, which together with the Satura Spots give coverage of the whole stage, including the seven band members. “I have had the Design Washes now for three years and was really impressed with them when I got them. At the time there wasn’t an affordable LED zooming fixture but when I saw what they could do, I was really happy.”