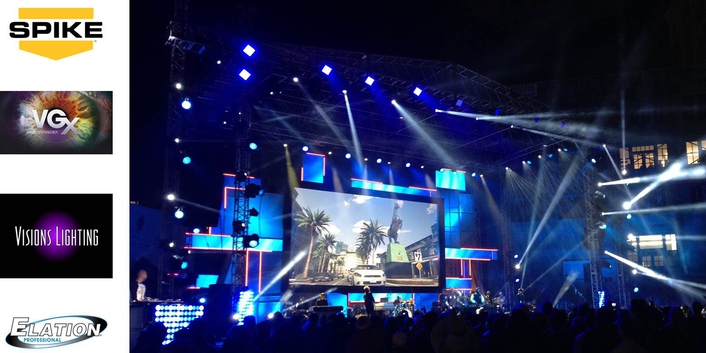 .
While awards were presented and world premiere video games showcased in an intimate indoor setting at Spike TV’s VGX Video Game Awards in downtown LA in December, rain showers stopped just in time for live performances on an outdoor stage that was outfitted with 40 Elation Platinum Beam 5R moving heads.

“We were looking to get some shafts of light coming from the floor and the rig, something that would bring the audience and stage closer together,” commented Gus Dominguez, lighting designer for the event.  “We needed some serious beams due to the fact that we were in an exterior venue.”

Gus had never used the Platinum Beams before and had actually designed the rig with Sharpy’s in mind but vendor Visions Lighting suggested he try the Platinum Beams. “I wanted to try them and agreed to use them on this event,” Gus says. “They did an amazing job and were easy to use. I really enjoyed the amount of colors you get out of them and the color quality was good. It also has a nice prism that we used throughout the show.” The Platinum Beams worked from a back riser and vertical columns, as well as from a downstage truss and floor positions. A few were also used to beam over the audience from a satellite stage.

Weather proved to be an issue with rain coming down during load in and up until 1 ½ hours before show start but luckily the skies cleared before the start of the event. “Despite the rain, the Platinum Beam fixtures held up just fine and we didn’t lose a single one,” said Todd Roberts of Southern California-based production company Visions Lighting, who supplied lighting, staging and video for the event. “We’ve used a lot of Elation gear and the Platinum Beam 5Rs have always been rock solid.”

Held on December 7th, VGX is an annual awards show by Spike TV that recognizes the best computer and video games of the year. Hosted this year by Joel McHale and Geoff Keighley and streamed live online, the three-hour show featured the music of “Grand Theft Auto V,” with performances from hip hop artists The Game, Freddie Gibbs, and Jay Rock.

“I was pleasantly surprised by the Platinum Beams,” Gus concludes. “They did some fine work and helped make the show look bigger. I'm a big fan of trying new things and I was glad that I got the chance to use them on the VGX.”