KVLA Television in Huntington Beach, California, a unique TV station that broadcasts to the large Vietnamese speaking community in Southern California, has recently added two new studios and is using LED strip lighting from Elation Professional to color the sets.

Christian Choi of Emergent Entertainment Group was production and lighting designer, as well as fabricator for the project, and explains that the client initially sought to create three areas within two studios - a segregated news area, two talk shows and a home shopping set (which was eventually postponed). Choi came up with rendering ideas for both the news and talk show sets, something he says he enjoys doing in order to get everyone’s creative juices flowing. “Since the building was nothing more than a warehouse with attached office space, basically a shell, it was a bit difficult for everyone to picture what could actually happen in that space. The renders enabled everyone to see how much could be done in such an area, which is not only helpful for the clients, but for me too,” Choi explains.

Cuepix Strip Tri
Choi admits he had already ordered key lighting fixtures prior to having a look at the Elation lights but was impressed with what he saw in the Elation LED strip lights. “At the time, all I needed were wash fixtures for all the backgrounds so I chose the 70-degree Cuepix Strip Tri units with COB technology for their ability to wash large areas evenly.” The Cuepix Strip Tri feature long-life 30W 3-in-1 RGB COB LEDs, which provide a host of benefits over traditional SMD LEDS including greater output, more even light distribution with fewer color shadows, better color homogenization and better heat dissipation. Choi used the fixtures on the crafted panels with the Voronoi patterns, a computational algorithm cut into them via a robotic cutter.

ELED QW Strip
Choi then needed something that would bounce around the inside of the triangular lotus panels to give an even wash along a 4 ft surface and found what he was looking for in the one-meter-long ELED QW Strip with its 18x 5W Quad RGBW LEDs. “I was looking for something that could wash a larger surface area evenly with flexible color for camera and still stay relatively bright,” he says. “The panels themselves were basically white bounce boxes encompassed with white PVC on the inside. They were also 6” deep, which is not a lot of space to put a fixture, so it had to be compact as well. The only thing that was in that brightness class of fixture that is affordable is the ELED QW Strips and they were fricken fantastic for the job, too. I’d only run them at about 60% level on camera otherwise they’d bloom with the aperture I was setting for.”

Both fixtures were more than adequate for their tasks, Choi says. “I also wanted something that wouldn’t blow up or need servicing anytime soon. The studios that I build are relatively maintenance free; there are no lamp changes or gel changes that need to be done with them, so selecting fixtures that suit this type of installation is an important consideration in my process.”

Full scenic shop
Besides lighting and video design duties, as a designer and fabricator Choi designs the scenic elements, makes the sets, welds and paints them. The scenic begins as renders that eventually get drafted out in 3D CAD, and from those drawings they extrapolate BOM lists, and get costing for materials.  Those drawings get handed down to fabrication and the Emergent guys go to work building. “CAD is an integral part of what we do, it is the heart of our operation, and not a single piece gets ordered until we have it figured out in CAD first,” explains Choi.  “We also run structural simulations on the pieces to check center of gravity, mass, and make sure the structure will hold up well.” 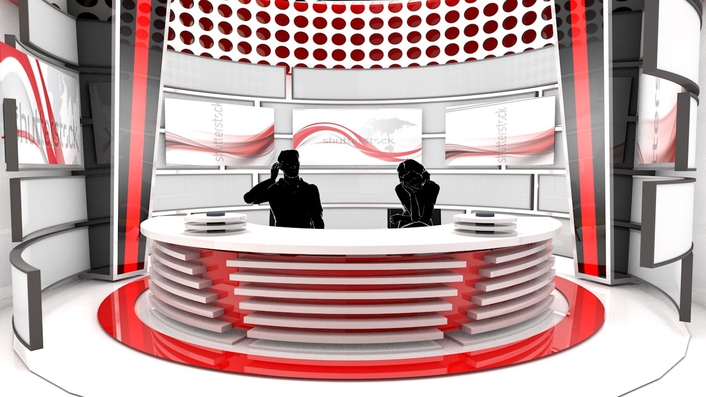 For the KVLA project, Choi even built a shop equipped with a full-size production CNC robotic high-power cutting table, welding and paint department, and more to complete the set construction. “This enabled me to build the set reasonably, and gave me license to explore more complex algorithmic pattern work and developable surfaces without having to pay through the nose for CNC time,” he explains. “We built the machine and shop in three weeks then built the studio grids, lighting installs, news scenic, and the talk show scenic after that.”

Installed in March 2014, the new studio sets are used from early morning to late in the evening on a wide variety of news and entertainment programs. Helping Choi on the project was Art Director Luisa Wong, who he calls his “right hand who helped me tremendously with everything.” Others on the KVLA Studio team were Thomas Folden, Lead Carpenter and Lighting Installation Crew Chief; Shawn Shannon, Lead Metal Fabrication and Welding; Kevin Do, House Lighting Director; Fernando Accosta, Electrician and LED Practicals Specialists; Scott Ramey, Labor (Complete Entertainment); Mr. Van, House Manager; and Executive Producers Jenny and Cindy Ho.