.
Johannesburg based EFX Productions has been providing OB services in South Africa for more than a decade, working with staging companies, transmission service providers and creative directors to produce sporting events, concerts, television series and documentaries.

Founder Brendan Marsay has more recently been taking on bigger and increasingly complex productions, requiring him to upgrade the live production capabilities on his company’s OB van with the help of local broadcast systems integrator Telemedia (PTY) Ltd.

“At times we found ourselves running an external HD switcher in order to give us enough channels,” says Marsay. “Often we’d be keying graphics downstream or we’d end up using a video router so that we could mix six camera sources, one graphics channel and one playback channel. It was a very limiting setup that we’d simply outgrown. Furthermore, many of the larger jobs we are now taking on require multiple big screens in addition to an external broadcast, so having a fully fledged 2 M/E production switcher was an absolute necessity.”

Flexible 2 M/E Switcher
“We’d been using a Blackmagic Design ATEM Television Studio as part of a simple flyaway kit for sometime. It was originally built so that we could take on smaller one and two camera productions that needed a bit of picture manipulation, especially gigs that were going live to screen, without tying up our main production desk on the OB van,” explains Marsay. 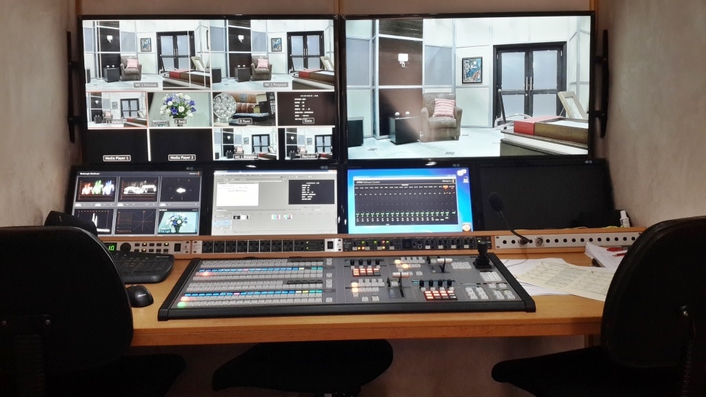 When it came to upgrading the OB van’s production capabilities, Marsay had no hesitation in choosing the Blackmagic Design range of broadcast infrastructure again.

The centrepiece of the van’s new workflow is the Blackmagic Design ATEM 2 M/E Production Switcher paired with an ATEM 2 M/E Broadcast Panel and video wall. “The flexibility of the multi view options on offer by the switcher was one of the big reasons I ultimately settled on the ATEM 2 M/E. I like the fact that you have the flexibility to run an eight channel multi view on one screen and a program preview on another. Alternatively I can use all 16 as a multi view across the van’s two 40 inch television screens. Incredible flexibility.

“Another bonus is that your graphics channels on the ATEM don’t take away any physical inputs. In essence, that gives me 18 plus channels, with 16 physical inputs, each with their own automatic frame synchronizer. This only further increases the size and scale of productions that we are able to take on.

On Location
Since completing the upgrade, EFX Production has been involved in a number of productions including the South African soap opera Isidingo, for broadcaster SABC 3. “We were brought in to assist with catching up with on their schedule so that staff and actors could have a decent holiday in December,” reveals Marsay.

EFX Productions used both M/Es on the ATEM, with M/E 1 providing a HD program feed to the HyperDeck Studio and Sony XDCAM deck, which was down converted to SD, while M/E 2 was being operated remotely via a tablet, switching the vision mixers’s preview. The ATEM’s SuperSource feature was also used to provide an extra multi view.

“That process is all running in HD and then multi split for our three camera positions. Using the ATEM’s aux outputs meant that EFX could supply multiple monitoring to SABC during production. We ran monitor feeds to two different parts of the studio. The first went to their production office, which is in a separate block to the studio, allowing them to keep an eye on what was being filmed, and the second monitoring signal was for the production floor,” said Marsay.

“In addition, we also ran Blackmagic’s UltraScope software for waveform monitoring off a third aux bus and used an Android tablet app to augment the ATEM 2 M/E Broadcast Panel so that a second bus could be cut remotely, or to control the 2nd M/E layer for aux out switching. It just adds to the power and flexibility of the system as a whole,” he adds.

Marsay uses the DeckLink Extreme 4K capture card with third party software to create any graphics and these were fed directly into the ATEM over SDI. 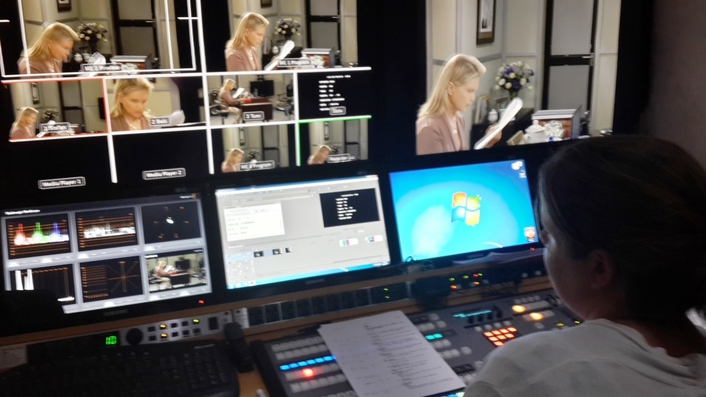 A Mini Converter Audio to SDI is used to embed eight channels of AES/EBU audio, mixed on the OB van’s digital audio desk, into the SDI feed, which is then passed through a Mini Converter UpDownCross and down converted from HD-SDI to SD-SDI. “The UpDownCross also works really nicely as a DA. That means all of our record outputs came straight out of the Mini Converter and are then recorded on to our recording decks, which include the HyperDeck Studio,” explains Marsay.

“What’s really impressed me with Blackmagic Design hardware is the thought process between all the different elements. Whether it’s the mini converters, HyperDeck SSD recorders or its family of ATEM switchers, it makes a very straightforward arrangement so that a lot of things can be put together to create an incredibly powerful system. Each piece has merit on its own, but add another piece and it becomes that little bit more powerful,“ concludes Marsay.

Eurocam TV EC11
SC Freiburg Fans Get Clos...on With Blackmagic Design
Live and Behind the Scenes with L’Equipe