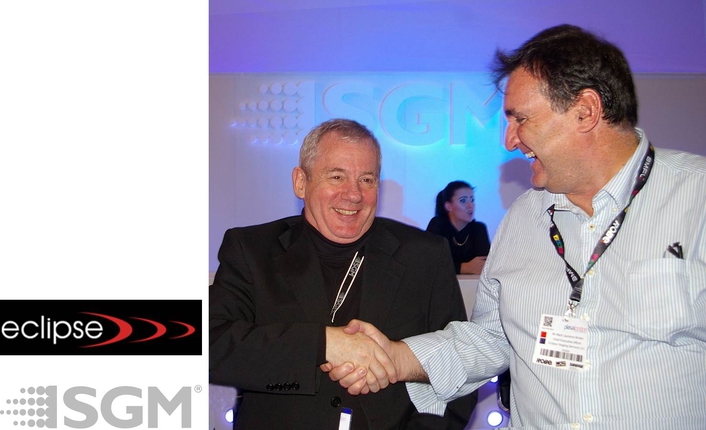 SGM’s Peter Johansen and Mark Brown of eclipse Group seal the deal
Dubai based technical service specialists, the eclipse Group, operate a programme of continuous investment to keep their inventory of lighting, sound and video solutions at the cutting edge.

Recently they made their first investment in SGM’s new LED technology with the purchase of 40 P-5 low profile, high output LED Washlights from territorial distributors TechnoPro, having earlier fielded 120 of the fixtures at the inauguration of a major lighting festival in Dubai.

This was all the proof that eclipse founder and CEO, Mark Brown needed, although he and his technical team also undertook a critical evaluation against another industry standard architectural colour changer.

“The result was like chalk and cheese,” he said. “The P-5 just blew away the competition. In particular the quality of the red [diode] was hugely impressive.”

With its 44 x RGBW 10W LEDs creating a high luminous output, the P-5 boasts an efficacy of 51,2 lm/W combined with a flicker free operation and IP65 rating, making it suitable for any application, while interchangeable 15, 21 and 43° lens kits add further to its versatility. Apart from the large variety of saturated colours that can be created due to the RGBW, the high-performance LEDs produce a very bright and pure white, which provides a full palette of pastel colours.

“When we saw the P-5s working for the first time we immediately loved them and wanted to invest in our own,” confirms Mark Brown. “We have principally bought these for colour washing buildings and what we were really looking for was power and high output.”

Since then eclipse have used the lights regularly, most recently to illuminate The Football Five’s World Championships (F5WC) indoor football championship at Dubai World Trade Centre - a global initiative to select talented amateur football players through regional 5-a-side qualifying rounds to then compete in the Dubai 2015 ﬁnals.

“This was both our first purchase from SGM and from TechnoPro and we have not only been impressed with the products themselves but also the support we have received.”