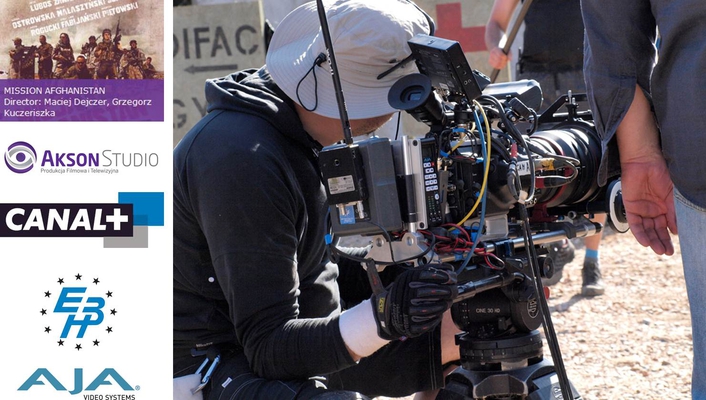 Produced by AKSON STUDIO and directed by Maciej Dejczer with cinematography by Jarek Szoda, the dynamic, action-packed series brought a production crew and EBH assistants into treacherous terrain far from Warsaw for an 80-day shoot. EBH Polska Co-Owner Maciej Ostoja Chyznski explained, "The idea was to leverage the more rugged topography of Poland to recreate an Afghan landscape for the show. Environmental conditions, however, proved to be the worst you could imagine - 80 days of dust, dust and more dust, in addition to extreme heat from blistering summer temperatures."

Aware of the conditions the team would face, early on EBH set out to find a lightweight Apple ProRes recorder that could survive the environmental challenges posed by the shoot. After several days of testing a variety of available options out on the market, the EBH team decided that Ki Pro Mini was the best recorder for the job.

"Ki Pro Mini won hands down in all of our tests. It proved durable and portable, and recorded the highest quality ProRes, plus it's easy to learn and use. We also performed worst-case-scenario testing and it passed with flying colors," shared EBH Co-Owner Filip Kovcin. "Having used a number of AJA solutions throughout the years, we also knew it would prove reliable for this sort of shoot and give our client the quality results they expected. Ki Pro Mini was a natural choice for the project."

Almost the entire shoot was done handheld on Sony F3 cameras with the S-Log option, outfitted with RED 18-85mm zoom lenses. The HD-SDI output from the camera was fed to two AJA Ki Pro Minis recording at ProRes HQ. EBH was also able to leverage the output of the Ki Pro Minis to send matching timecode to all the other equipment on set, ensuring everything would remain in sync in post production. Once the footage was recorded, without having to spend additional time on ingest or transcoding, Ki Pro Mini provided edit-ready files that could be natively accessed in both Avid® Media Composer® and Apple® Final Cut Pro®.

"This is one of the toughest productions we've ever undertaken, but throughout all of it, the Ki Pro Minis performed flawlessly. They were very reliable and allowed AKSON to capture the highest quality ProRes in the most undesirable of conditions - all while fitting within a tight budget," Kovcin concluded.