The _eaglecopter - _wige Enters a New Dimension of Helicopter Productions 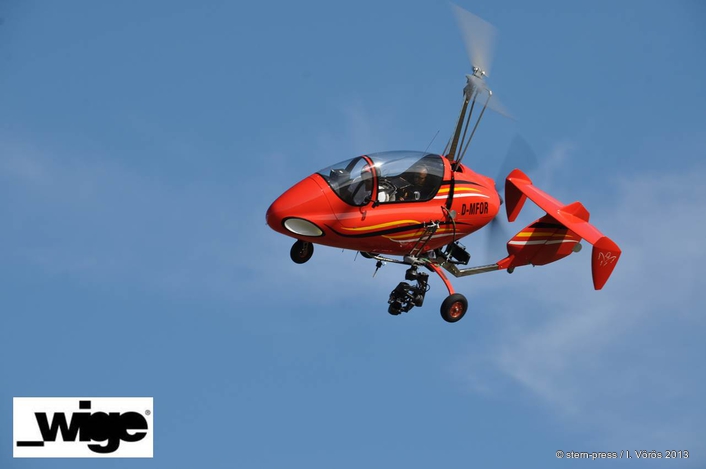 The _eaglecopter
Innovative, swift, cost-efficient: Organizers and TV stations who wish to have their events produced in spectacular aerial shots now have an alternative to expensive helicopters - with the _eaglecopter by _wige MEDIA AG.

Spectacular aerial shots form a substantial and versatile part of the live broadcast of sports and other major events. The production of corresponding images is often associated with the use of helicopters with costs in the five-figure range and thus not feasible for many projects.

_wige MEDIA AG has developed the _eaglecopter in collaboration with the Austrian helicopter manufacturer Trixy Aviation. This flying machine with a total curb weight of 342 kg and a length of 5,800 mm is significantly lighter, swifter and features a better fuel efficiency than a conventional helicopter. The _eaglecopter comes with a fully integrated stabilized 3- or 5-axis camera system, including live uplink equipment. With the 5-axis stabilized camera system, the cost per minute are less than 50% compared to a conventional helicopter production of motion picture footage from the air, which costs around 64 EUR per flight minute. In addition, the copter can optionally be used as a repeater or relay station in order to expand the transmission of signals. The aircraft can be easily and inexpensively transported to the site with a trailer or pickup truck.

After being tested for the first time during the Ironman Austria in Klagenfurt at the end of June, the _eaglecopter lifted off last weekend at the ADAC GT Masters at Lausitzring. _wige has been commissioned with the TV production of the "League of Super Sports Cars' since 2007, and today also provides editing and TV marketing for the series. During the race in the Lausitz, the Cologne media company was also responsible for the coordination of the _eaglecopter and the uplink that transferred the signal of the copter to the OB truck. The aerial shots were then inserted directly into kabel eins’ TV live broadcast, thus providing live images of the popular racing series from the sky for the first time ever.

The two-seater plane, which can fly up to an altitude of 3000 m, provides space for a pilot and a camera operator. It was exclusively designed by the Austrian company Trixy Aviation for _wige MEDIA AG. One of the biggest challenges in the development was to ensure the stability of the camera to get steady, "shake-free" images, while at the same time constructing a very light-weight camera mount. The camera head is now used for precise balancing of utmost ease and stability; it forms the focal point of the entire project.

_wige offers broadcasters and hosts the opportunity to produce aerial shots with minimal effort and low costs. The "_eagle" can be used at numerous major events, especially in sports, e.g. Triathlon competitions or winter and trend sport events. The lightweight helicopter will also provide the viewers with high quality shots from the sky at the upcoming ADAC GT Masters race at the Slovakia Ring.

Short interview with Lukas Steiner
Lukas Steiner is the developer of the _eaglecopter and is responsible for the business development of _wige BROADCAST gmbh. The 23-year-old is known in the technology sector as the inventor and developer of nano talk, the world's smallest radio, used during the Tour de France.
Steiner was also involved in the development of the ski goggle camera for the FIS Alpine Ski World Cup 2013 in Schladming, Austria.

Q: Lukas, why did you invent the _eaglecopter?
A: I’ve been thinking for quite some about the future of TV productions. Today, most TV formats cannot afford live and aerial shots, as the budget often does not allow covering the increasing costs of a helicopter. So I began my search for an alternative, which is completely different, cost effective and above all - safe! 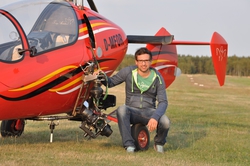 Q: What were the challenges (especially during Ironman?)
A: The biggest challenge was probably affixing, or better integrating, a fully stabilized camera system. Through a special and unique design, it is now possible to achieve a 360 degree view with a 27x zoom lens! The process cost us a few sleepless nights, so we now applied for a patent for this particular mount.

Q: What are _wige’s future planes for the _eaglecopter?
A: Basically, the _eaglecopter the most important component of an emerging concept at _wige. We want to offer innovative and cost-efficient live productions in the future. In the upcoming months, two or three complementary products will significantly change the concept of live productions!