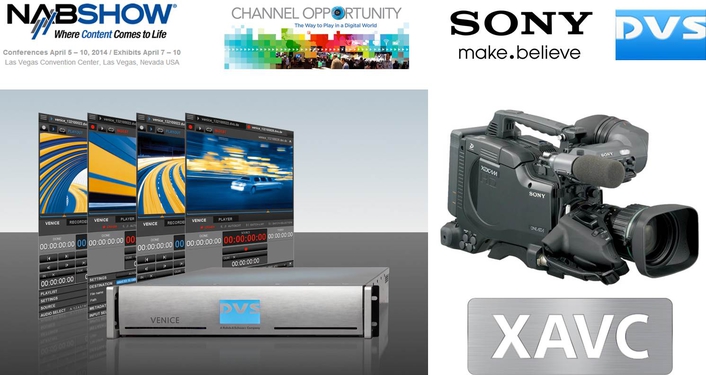 Sony booth: C11001 - Rohde & Schwarz booth: SL1605
On the show floors of the Las Vegas convention center, VENICE, the ingest and production server for studio environments from Rohde & Schwarz DVS, will be essential to the on-air application at Sony’s demonstration of a stunning file-based XAVC/XDCAM end-to-end workflow simulating the phases of shooting, ingest, editing and on-air.

Rohde & Schwarz DVS is supporting the XAVC™ format and workflow. At NAB 2014, VENICE, the ingest and production server for studio environments from Rohde & Schwarz DVS, will be demonstrated at the Sony booth. The Sony booth C11001 will give the NAB’s attendees a compelling view of an innovative and advanced XAVC/XDCAM end-to-end workflow. The XAVC format has been widely adopted in the marketplace. XAVC was introduced by Sony to serve as a driver to promote and establish a 4K content production infrastructure.

Rohde & Schwarz DVS has been an official alliance partner of Sony, supporting the XAVC format and workflow since 2013.

The collaboration of the two companies has now been underlined once again by presenting the Rohde & Schwarz DVS system VENICE in Sony’s 3rd party vendor area. Thanks to VENICE’s open platform and file-based system architecture, the ingest and production server was seamlessly integrated into Sony’s file-based production environment. In Sony’s workflow VENICE is responsible for the on-air application, ingesting and playing out both XAVC HD and XDCAM content. Editing will be carried out with Adobe® Premiere®. The innovative XAVC workflow is complete with Spycer®, the content control software from Rohde & Schwarz DVS, that copies the files from the Adobe® Premiere® workstation to VENICE’s internal storage for playout.

Haji Kamata, Senior Manager Strategic Alliance and Partnership Development at Sony Corporation: “Sony continues to work with its XAVC alliance partners to enhance the workflow benefits provided by the XAVC format for our mutual customers. We are excited to highlight new additions to the growing XAVC ecosystem such as Spycer® and VENICE from Rohde & Schwarz DVS to Sony’s community of XAVC customers.”

Markus Elbert, Product Manager at Rohde & Schwarz DVS: “We are very pleased that our VENICE has been assigned such an important role at Sony’s NAB booth. Being an official Sony Partner we strongly believe that the XAVC family opens up a host of opportunities for broadcasters working in a file-based environment.”

Rohde & Schwarz DVS GmbH
For more than 25 years, Rohde & Schwarz DVS GmbH has been very successful in the professional film, video post production and broadcast markets. The specially developed and manufactured hardware and software are applied to the production of popular TV series, Hollywood blockbusters and in Digital Cinema. CLIPSTER® was the first system in the world to make real-time 4K processing possible. The future-proof ingest and production server VENICE offers a flexible solution for modern, file-based workflows in broadcast environments. At NAB 2013, VENICE won the Broadcast Engineering Pick Hit Award and was also a winner of the Trophée SATIS in 2013.