Drones at CES and on the Slope behind Marcel Hirscher 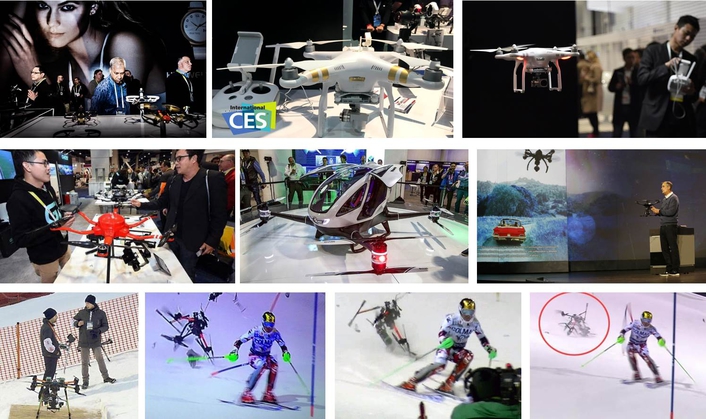 The slalom skiing champion Marcel Hirscher escaped unharmed after a drone carrying a camera fell from the sky and narrowly missed him on his way down the slope during a race in Italy. The Austrian, who has won the overall World Cup title for the past four seasons, was competing in a slalom race in Madonna di Campiglio in Italy.

Footage posted online shows the large camera drone crash to the ground just two feet after Hirscher has sped by. He does not appear to have noticed it at the time and continues with the race. "This is horrible," Hirscher, who finished second, said. "This can never happen again. This can be a serious injury."

In Britain, the Government is considering regulating the use of drones following a surge in the number flown just a few metres from planes during take-off and landing at major airports. Safety experts have warned that the unmanned aircraft could bring down a passenger plane after four potentially fatal near-misses in September.

“These people, they have no jobs, no food, no education, no future. I just figure that we have two things we can do. Help, or we can sit back and watch a country destroy itself on CNN.” – Eversmann, “Black Hawk Down,” Revolution Studios, 2001

It’s estimated that 1M UAVs (unmanned aerial vehicles) or drones if you prefer were gifted this Christmas.

All I can think of are my two favorite orators:

-        Will Rogers – “You can’t legislate intelligence and common sense into people.”

-        George Carlin – “Just think how stupid the average person is and then realize that half of them are stupider than that.”

The industry is so exciting there’s a convention every other week, professional/casual publications, training/educational schools, professional organizations (like the Drone Coalition) and clubs cropping up everywhere.

I understand all the drone paranoia:

-        Get some good personal liability, medical drone insurance (see above) and you know people will want to sue

Problem is the excitement surrounding drones is a fever as big as it was around tablets, smartphones and is around wearables, IoT (Internet of Things) and IoE (Internet of Everything). 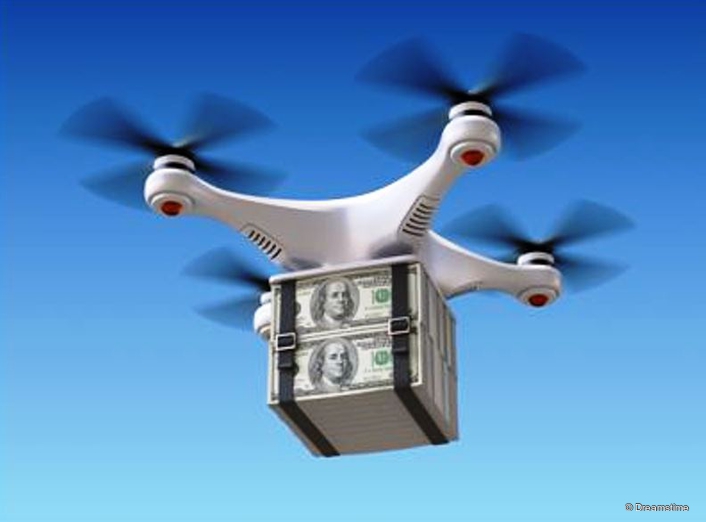 Drone Bundle – Seemingly out of nowhere, drones or UAVs flew off the shelves for recreational flying.  They have already caused their share of problems for the general public and firms that want to use them for a wide range of commercial applications.  Proposed regulation of the free-flying aircraft is still a work in progress.

It’s all because people like Teal Research, CBInsights, others estimate that worldwide sales of drones, accessories, apps, etc., will leap to $90B by 2024.

The rapid growth is not just drone sales but all of the technology that goes into them like chips that power/control them, apps that manage specific operations and activities and obviously the capture/storage of the data.

There are industry leaders most of us never heard of until a couple of years ago.   China’s DJI leads the pack with a complete family commercial and recreational UAVs followed by 3D Robotics, Parrot and a herd of others.

That herd received over $100M in startup funding in 2014 from VCs (venture capitalists).  Probably a ton more last year.

Then there is the world of cheap knock-offs that copies its way in to sell a crap load of crap at a cheap price to anyone who’s got $50 - $200.

In addition to the toys there are some seriously good applications for drones.

Commercial Use – While retail package delivery may have garnered early headlines for UAVs, they have already been in widespread use in commercial applications.  Leading the demand for using the aerial devices are the photo and film industries.

People in each market segment say theirs is the most important, exciting drone market but M&E really is (ok I’m biased).

In the U.S. news folks are making a case for their First Amendment rights to use drones as governing entities struggle to develop privacy and safety guidelines.

Actually what the NMC (New Media Coalition) said was privacy, bureaucracy and tech logic doesn’t fit with their journalistic protection.

Fortunately there are sane and professional organizations that are trying to help the M&E industry get it right, do it right.

National Association of Broadcasters, International Broadcast Convention and national/regional/local events are doing a lot to ensure content producers (and people in other industries that use video) act and work in a responsible manner and still get the shots they want/need. 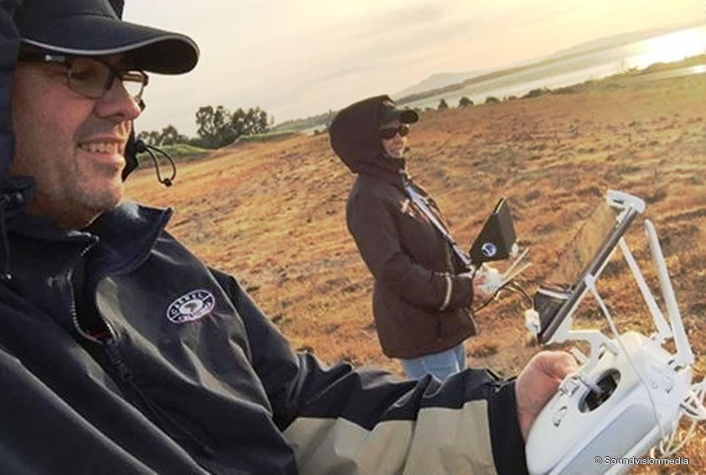 Follow the Rules – Filmmakers like Jeff Foster, of Sound Vision Media, have found a growing demand for drone film work for commercials, businesses and creative story telling.  But he’s equally concerned that without proper training of pilots, the recreational and mischievous use of UAVs could make it more difficult for commercial users to carry out their work.

At AVW/DroneWorld they got all the scoop on new gear, techniques/apps, educational/training services and especially new legal guidelines/responsibilities for the operation of their aircrafts to keep their butts from being sued and their gear confiscated.

Actually regulators abroad have moved more quickly than in the U.S.

In Australia, Britain, France and Sweden, drones are allowed for commercial use if they receive permission from the government. The European Commission is working on a set of rules to allow for commercial drone operations across the Continent.

In hopes of bypassing overly restrictive and stupid requirements manufacturers, retailers, legitimate user organizations developed some safe and sane proposals the FAA (Federal Aviation Administration) and DOT (Department of Transportation) adopted most of it with minor tweaking (bureaucracy).

If the Christmas drone weighs over a half pound (250 grams) the pilot has to register.  There are already a bunch of websites that will “help” you but it ain’t that tough:

-        display a government-issued registration number on each craft

My kid can do it in no time!

I understand making them easy to buy/use – great for manufacturers and retailers.  But even a one pound drone traveling at 30 mph has got to smart.

Drones are already soaring beyond their practical and recreational uses and are in the hands of troublemakers and pranksters. 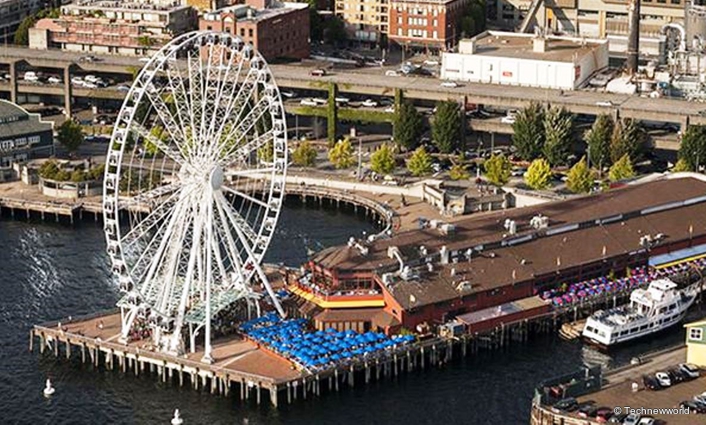 Incidents – Flown by poorly trained, troublemakers and pranksters, there is an increase in the number of reported incidents such as the drone that struck the Seattle Great Wheel.  Professional pilots and emergency personnel are increasingly concerned that drones will be involved in accidents and loss of life.

There are plenty of reports of in-air incidents (it was too damn close) with commercial aircraft, folks flying planes/choppers wildfires to put out the blaze and SAR (search and rescue) efforts.

There’s been a lot of news coverage of units crashing at soccer matches, the U.S. Open, football games and buzzing people in parks and it’s going to get worse before it gets better.

Once the individual gets his/her hands on their UAV to do neat stuff like spy on their neighbors, smuggle stuff into prisons and lose control over the gear so it goes who knows where.

There will be more!

Folks like DJI want to dodge the over legislative bullet by adding software that limits recreational flying heights and prevents the drones from flying into restricted airspace.

As Jesse Ventura, Minnesota’s colorful former governor said, “You can't legislate against stupidity,” which also applies to crime and greed.

The advisory group explained the simplicity of the registration process by saying, "Any registration steps more burdensome than these three simple steps may jeopardize the likelihood of widespread adoption and would undermine the overall registration philosophy that enabled the Task Force to come to consensus."

The registration is designed to hold drone pilots accountable for violating things like FAA drone operation rules, suggesting penalties for violations (leaving fines, actions up to the FAA/DOT).

Drones were sold by the squadron this past holiday as intelligent machines but they’re really just tricked out remote-control planes.  Few have the common-sense necessary to detect/avoid obstacles, figure out where they’re at or how to get home.

Buying a drone should include pilot training rather than trial-and-error. 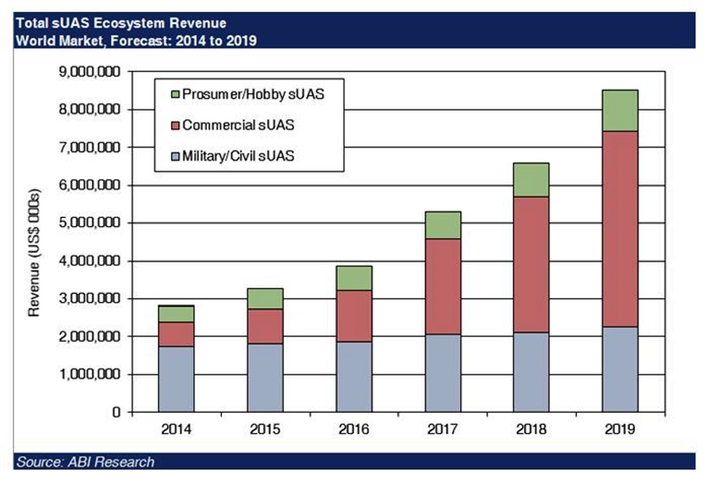 Growth Opportunities – Business and commercial applications for UAVs have only just begun to emerge, but the potential far outweighs the unit sales for recreational and military applications.

I didn’t talk to a person at Drone World who wasn’t 100 percent for pilot education and training.

People who were kicking the rotors at the show discussed a range of commercial applications - construction, firefighting, monitoring and repairing infrastructure, agriculture, search and response, Internet and communications services, logistics and delivery and wildlife preservation.

But key industry analysts note that the most interesting applications will be those we can’t even predict today.

Filmmaker Jeff Foster, head of Sound Visions Media, co-founder of the Drone Coalition and consulting reviewer to leading drone manufacturers; is a firm believer that drone pilots should be well trained before they take the controls.

“Responsible firms are working on some excellent technological solutions so that things like crashes and near-misses will soon be things of the past,” Foster said.  “But between now and then, we’ll experience a lot of turbulence.” 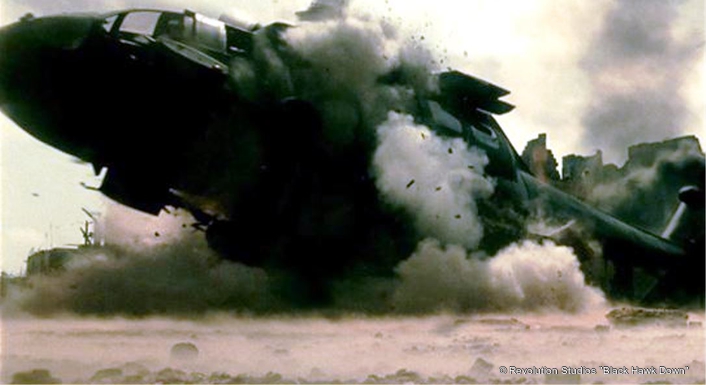 Or, as McKnight said, “Yeah, for you two, circling above it at five hundred feet its imperfect. Down in the street, it's unforgiving.”