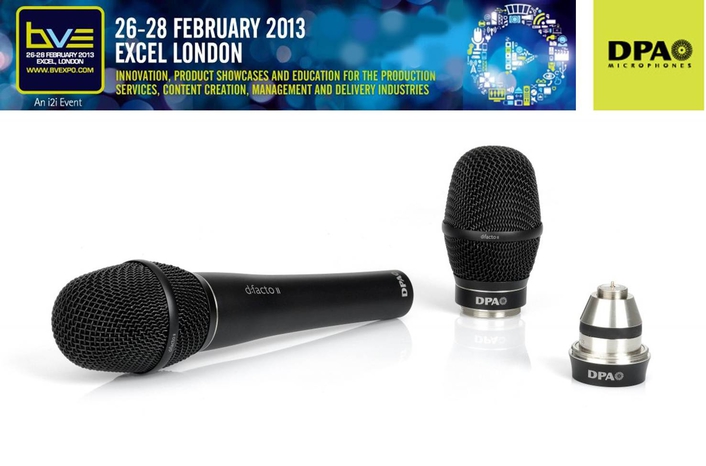 .
DPA Microphones is introducing its new d:facto™ II Vocal Microphone to the broadcast industry at this year’s BVE Exhibition in London, where it will be on show on the DPA distribution partner Sound Network stand (B.55).

Ideally suited to live music broadcasting, this latest addition to the d:facto line offers an extraordinarily natural sound, high separation and extreme SPL handling, giving users unlimited possibilities for their performances. In addition to use with the new wired DPA handle, the d:facto II provides singers and engineers with the added benefit of a state-of-the-art adapter system that allows for seamless integration with many professional wireless systems.

“We are extremely proud to have developed an ingenious adapter range that brings the true DPA sound out of a wireless system,” says Christian Poulsen, CEO of DPA Microphones. “The wireless systems currently available deliver very limited power to drive the capsule, so getting the sound quality we wanted was nearly impossible. We had to be creative and put a huge amount of work and thought into the electronic circuit of the adapter solution. We wanted to make the best vocal microphone on the market, and with the d:facto we have reached this goal.”

The new d:facto II guarantees users exceptional DPA sound with popular existing wireless systems such as Sony, Lectrosonics, Shure, Wisycom and Sennheiser. The d:facto II provides improved audio performance as it is superbly linear in frequency and phase, both on- and off-axis, while its impressive definition and accuracy reproduces a singer’s voice effortlessly.

The flexibility of its inventive adapter system gives the user easy and very affordable possibilities of choosing either a wired DPA handle or the professional wireless system of their choosing, with no loss in the sound quality. Its simple plug-and-play features allow it to reproduce an extraordinary natural sound, which reaches the extreme sound level handling of 160 dB. As with all DPA mics, the d:facto II provides superior gain before feedback, and a robust three-stage pop protection grid built into the microphone to remove unwanted noise. It also boasts exceptional isolation from handling noise as well as the ability to accommodate extreme sound levels.

Ralph Dunlop, Director of Sound Network, says: "We are all excited to be exhibiting at BVE once again, especially in light of the success we have had over the last year. The introduction of the new d:facto II Vocal Microphone is a milestone in the development of the DPA microphone range and we are proud to now have a microphone for every professional application.”

Sound Network will also be using the BVE platform to show DPA’s expanded d:fine™ series of headset microphones. Offering impressive gain before feedback and very stable construction, DPA’s unobtrusive d:fine headset microphones are easy to fit and provide presenters and guests with a discreet microphone solution that is nearly invisible on the face. The d:fine range is renowned for its audio accuracy and its ability to deliver natural voice intelligibility and consistent audio performance at all SPLs. d:fine capsules are so comfortable to wear that presenters can focus on their performance, safe in the knowledge that these hand-built microphones will deliver high-quality, distortion-free sound.

d:fine is available in both directional and omnidirectional options, in single or dual-ear designs and with several boom lengths.  Designed to fit comfortably, they adjust to accommodate any ear size and head shape and can be mounted on either the left or right side of the head. Available in black, beige, brown, and lime green, each solution performs spectacularly in either cabled or wireless settings and can accommodate a range of accessories including windscreens, power supplies,  and adapters or cables with fixed connectors (MicroDot, 3-pin Lemo, TA4F mini XLR, Mini-jack).

“DPA is internationally acclaimed for delivering the pristine sound quality that programme makers and viewers want,” Christian Poulsen adds.  “Our range includes microphones for a wide variety of broadcast applications and we are confident that, both in terms of sound quality and design, they are the best broadcast microphones on the market today.”