DPA Microphones Takes On A Downpour at the 2015 BRIT Awards 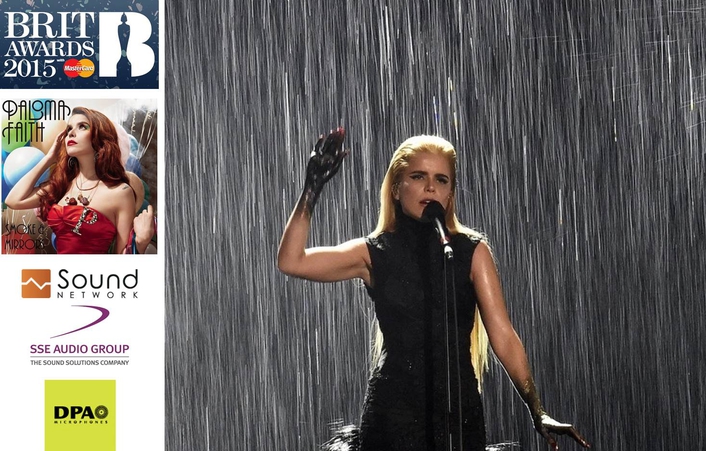 The durability of the d:facto™ Vocal Microphone allowed Paloma Faith to sing in the rain without compromising the sound quality
Paloma Faith's appearance at the 2015 BRIT Awards may not have generated the same amount of column inches as Madonna's, but from a technical point of view it was a major achievement – especially for DPA Microphones.

After winning the award for Best Female Solo Artist, Paloma performed a spectacular version of Only Love Can Hurt Like This that culminated with her singing the last verse and chorus in what can only be described as pouring rain.

"We knew the water effect was going to soak her microphone," says Paloma's Monitor Engineer James Neale. "It was definitely more of a downpour than a shower. To minimise the risk we went for a cable version of DPA's d:facto™ Vocal Microphone as we weren't sure we could waterproof the electronics of the wireless version she normally uses. We were relying on the double protection layer between the grill and the capsule in the d:facto and luckily this proved to be very effective against the downpour of rain used in the effect." 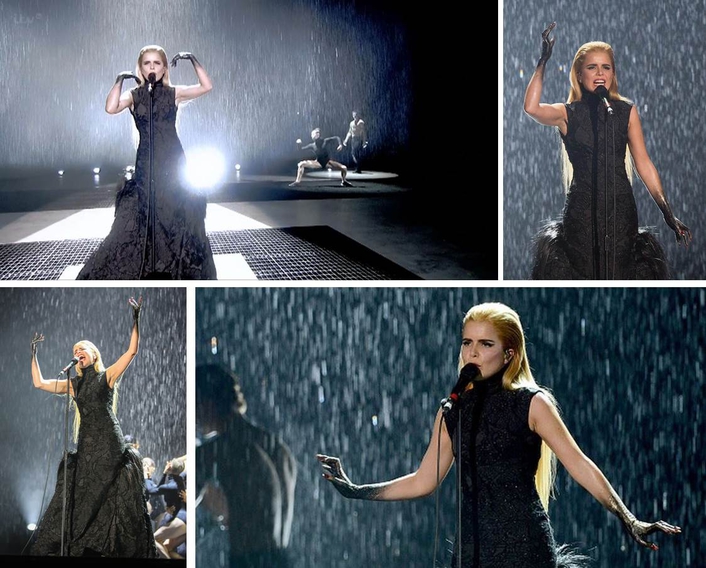 Neale, who has been working with Paloma Faith since 2014, is a big fan of DPA microphones, especially the d:facto Vocal Microphone which he first started using in 2013 with Ellie Goulding.

"The d:facto has an amazing sound quality - I especially like the virtually flat response," he says " The low frequency proximity effect is almost non-existent. Furthermore it is ideal for singers who sing on and off the microphone.  I would definitely recommend this microphone to my fellow sound engineers. Paloma's FOH engineer Huw Richards carried out some listening tests at SSE. He tried out a series of microphones and preferred the d:facto as it delivered a very natural sound. We tried out the d:facto with Paloma in rehearsals and she immediately liked it. She has been using custom decorated Sennheiser wireless handles for some time now, so we purchased a d:facto and adapter for  that system.  She moves all over the stage during her shows so her microphone really does need to be wireless."

Paloma now owns two d:facto wireless microphones with the Sennheiser adaptors, which were all purchased through the in Redditch via DPA’s UK distributor Sound Network. Neale had three d:facto Vocal Microphones at his disposal for Paloma's BRIT Awards performance, all supplied by Sound Network. One was used for 'wet' rehearsal, another for the 'dry' dress rehearsal and filmed show performance, the third was dedicated as a spare backup microphone, if required.

Despite its baptism at the BRITS, Paloma's d:facto Vocal Microphone worked perfectly and suffered no damage.

"The d:facto definitely works for Palmoa, and not just when she's singing in a downpour," Neale adds. "She didn’t like the high end boost in the last microphone she used and she is much happier with the flatter response she gets from the d:facto.  It also has great rejection, which is especially important with Paloma as she runs around the set and quite often stands on the riser in front of the drum kit."

Paloma Faith's tour will continue throughout 2015, taking in venues all over the UK, including a number of major Arenas. And DPA's d:facto Vocal Microphone will continue to play its part in ensuring she delivers great sound.