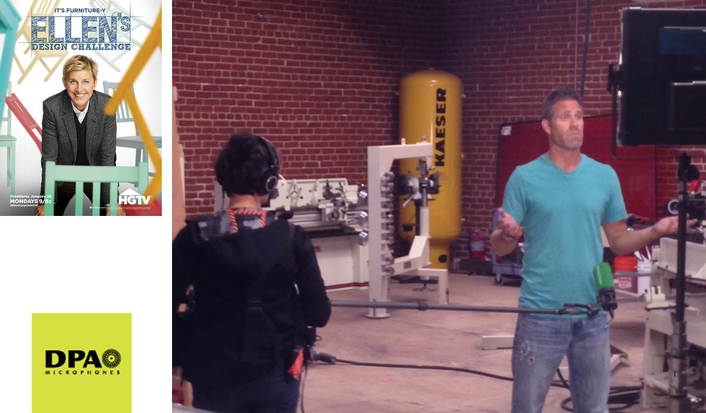 HGTV competition relies on d:screet™ 4061 for durability and extreme handling
Furniture building isn’t the only demanding aspect of Ellen’s Design Challenge, a four-week-long HGTV reality show produced by Ellen DeGeneres, which began airing in the USA on January 26. In addition to the six competitors who are trying to make it to the end – using saws, drills and welders, among other noisy tools, to complete the weekly tasks – the audio team faced the daunting task of providing clear, crisp audio that is not interrupted by the hum of the machines. The solution was found with DPA d:screet™ 4061 Omnidirectional Miniature Microphones.

Selected by the show’s sound supervisor, Daniel McCoy, CAS, a longtime DPA supporter, the d:screet 4061s are used by the entire 16-member cast, which includes a host and three judges as well as six designers and the carpenters with whom they are partnered. “I’ve had a lot of experience doing build shows,” he explains. “I’ve been around enough shops to know that I needed mics that could handle extreme SPL – whether from saws, CNC machines, drills or welding. In fact, one of the builders is a blacksmith and she used an electronic anvil power hammer that would shake the building. To make matters worse, we had to film in the heart of downtown LA, so the RF was insane. But, the DPA mics paired with the Wisycom transmitters really saved the day.”

Shot in two very different locations – a smaller warehouse in the heart of Los Angeles and massive 100-acre junk/scrap yard in the city of Downey, California – McCoy needed to ensure that he had a reliable setup. For the outdoor shoots, he arranged three different bags, each with its own Sound Devices 633 mixer, to dial different frequencies from the mics and track them as they split up the sound. Since the conditions in the warehouse were frequently unpredictable, McCoy also brought along the DPA d:dicate™ 4017B Shotgun mic as a backup solution, but rarely needed to bring it out during production. 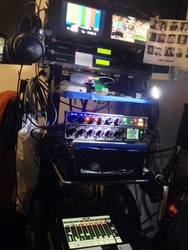 “When you’re working with leather aprons and lots of tools, you always run the risk of clothes rubbing or mechanical noise,” he mentions as the reason for having the d:dicate on hand. “But that didn’t really happen with the DPA mics. Throughout the four weeks of intense building, torching, cutting, burning and hammering, I didn’t have a single d:screet go down. These were some really harsh conditions for any microphone, we literally had to clean the mics off every night because they were caked with sawdust and debris, but the 4061s always performed flawlessly.”

In addition to the 4061’s ability to physically withstand the harsh conditions of the shop, McCoy also gives credit to its unwavering sound quality. “We placed all of the mics in a usual placement – centered on the chest – and that gave us amazing dynamic range over the background noise,” he explains. “The 4061 has great separation – we were able to separate the voices of each designer from the background noise and headroom to allow for really nice articulation. Even the producers with ear buds could hear people across the field of noise. It was interesting seeing them perform with such extreme background noise and still have the freedom to mix. The performance of the 4061s really made the show more than a noisy, fatiguing sound environment.”