FOH engineer Rick Wheeler chose DPA for Larry Carlton and Steve Lukather's recent concerts
Larry Carlton andSteve Lukather, two of the world's most inspirational guitarists, recentlycompleted an Asian tour that saw them together on stage for the first time in15 years. And behind the scenes, Front of House engineer Rick Wheeler was alsohaving a small reunion – with a DPA d:facto™ Vocal Microphone that he firstused in 2014.

Based in Nashville,USA, Wheeler has been Larry Carlton's FOH engineer, guitar tech, and tourmanager for the last 10 years. He was flown to Asia specifically for thisseries of concerts, which took place at the Blue Note Club in Tokyo and theHong Kong Baptist University in Kowloon Tong.

On arrival, his first choice of microphone was DPAand, after taking advice from Ken Kimura, head of DPA's Asian Office, hespecified a variety of models. These included d:dicate™ 2011C Twin DiaphragmCardioid Microphones for guitar, bass amps and kick, snare and hi-hat drums;d:vote™ 4099 Instrument Microphones for toms and kick drum; a matched stereopair of d:dicate 4011A Cardioid Microphones for overheads and the tried andtested d:facto™ Vocal Microphone that he used for live vocals and speech. 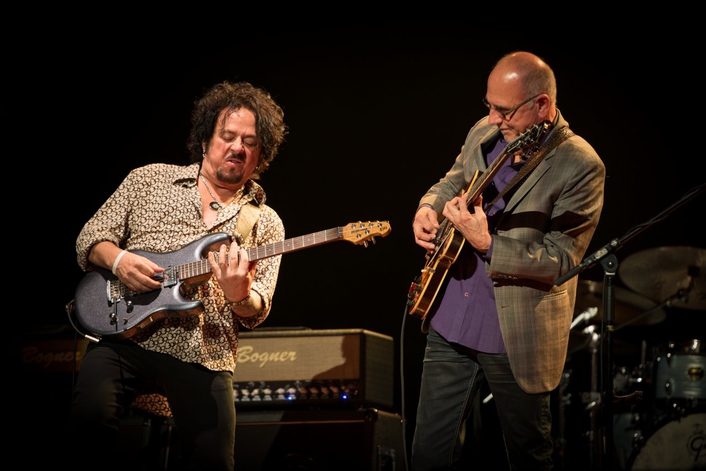 "I first came across DPA when I was working inHong Kong with American blues, jazz androck guitarist Robben Ford and wasintroduced to DPA microphones by Francis Lai, DPA's regional sales manager,"Wheeler explains. "On that occasion I used a DPA d:facto Vocal Microphonefor Robben and I chose it again for this tour because it is such an outstandingmicrophone for live vocals. Typically, condenser vocal mics can getunwieldy in a hurry, but the d:facto's supercardiod pattern provides a workableseparation from nearby sound sources. It is extremely responsive and verynatural sounding for the human voice." 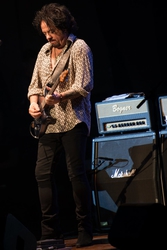 Wheeler admits he was initially sceptical aboutDPA's d:dicate 2011C Microphone, but he soon changed his mind when he heard itsclarity, particularly in Larry Carlton and Steve Lukather's guitar amps andinside the kick drum.

"I was very happy with it," he says."It has such a high SPL that it was able to handle the vast dynamic rangeof the kick from our drummer, Keith Carlock (who has previously played with SteelyDan, Eric Clapton, James Taylor and Sting). Overall it was a great microphone.I was equally impressed with the d:dicate 4011A mics that we used foroverheads. They really are made for that function and are outstanding overheadmicrophones that are exceptionally versatile. They were also very pure andaccurate and didn't colour the sound at all. I was really impressed with theway the cymbals sounded, but also the way the mics picked up the rest of thedrum kit so naturally."

Wheeler adds that what drew him to the d:vote 4099Instrument Microphones was their compact size and high SPL.

"After listening to them, I found them outstandingin frequency response for toms," he says. "They were very accurateand perfect in terms of staying out of the way of drum sticks, yet they couldstill pick up the sound of the drums."

Larry Carlton, who has wonfour GRAMMY Awards for his performances and compositions, and Steve Lukather, aprolific session musician who is best known for his work with the band Toto,were joined on stage by Keith Carlock, Jeff Babko on keyboards and TravisCarlton on bass.

"The real testament to the accuracy of amicrophone is how happy everyone is with their stage sound," Wheeler says."Artists tend to know what they like to hear and often don't pay muchattention to the makes or model numbers. On this tour everyone was delightedwith the sound and I received a lot of compliments about it. Particularlynotable was the sound we achieved in Hong Kong where we played a room where thesound can get out of hand in a hurry. On that occasion, I think I went right tothe edge of getting the sound at an appropriate volume for the music."

Wheeler, who is also a studio engineer and hasworked with Miles Smiles, Sam Bush, Keb Mo, Herbie Hancock, FourPlay and EarlKlugh, is now back in the USA and reflecting on the success of this tour.

"Overall, it was a great experience for me,both in terms of learning more about DPA microphones and getting a great mixfor the audience and performers," he says. "I like DPA mics so muchthat I have already recommended them to a number of other FOH engineers."

About DPA
DPA Microphones is the leading Danish ProfessionalAudio manufacturer of high quality condenser microphone solutions forprofessional applications. DPA’s ultimate goal is to provide you – whetheryou’re in live sound, recording, theater or broadcast – with the absolutefinest possible microphone solutions for your tasks. DPA takes no shortcuts inthe design processes nor makes any compromises in manufacturing, which is alldone at the DPA factory in Denmark. As a result, DPA’s products are globallypraised for their exceptional clarity and transparency, unparalleledspecifications, supreme reliability, and above all, pure, uncolored andundistorted sound.