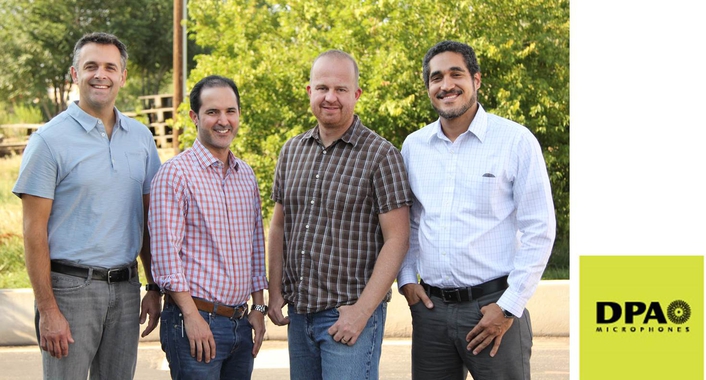 US office welcomes three new Area Sales Managers and promotes new General Manager: Spahr, Romero, Siebert and Rocha
DPA Inc., the US branch of DPA Microphones, is pleased to announce the appointment of Christopher Spahr, Pedro Rocha and Leonardo Romero as Area Sales Managers for the Eastern US, Western US and Southern US/Latin America, respectively. The company has also promoted Shan Siebert to General Manager of the Longmont, Colorado-based office. After a year of unprecedented growth for the US operations, these latest assignments signify the company’s continued commitment to its customers in the region.

“This announcement comes at a very exciting time for DPA Microphones’ US operations,” says Eric Mayer, President of DPA, Inc. “Not only does this serve as an example of how our brand recognition has expanded, but it also means that we’ll be able to further grow our fan base throughout the Americas. In addition, these appointments will allow me to perform my day-to-day strategy, sales and marketing responsibilities more effectively, giving us the opportunity for even greater success. Welcome aboard, Pedro, Leonardo and Chris, and congratulations Shan!”

Fluent in English, Spanish and Portuguese, Leonardo Romero has more than 20 years experience in the U.S., Latin American and Middle Eastern markets. In addition to joining DPA, Inc. as Area Sales Manager for Southern US, he will also oversee DPA Microphones’ distributors in Canada and Latin America. He comes to the company from Teldyne Reson, manufacturer of high-tech sonar and hydrophone devices, where he served as Latin America Sales Director. With a bachelor’s degree in economics from the University of California, Irvine, Romero has held sales positions for a variety of companies across the oil, printing and software markets, including Lub-Line Corporation; OneVision Software, AG; Esko-Graphics; Budde International, Inc. and Newgen Systems. He will build on these experiences to help with DPA’s presence in the HOW, theme park and cruise ship markets.

With a bachelor’s degree in business administration from Barry University and a recording arts associate’s degree from Full Sail University, Christopher Spahr’s 20-year career spans the music, recording arts and pro sound industries. He comes to DPA Microphones as Area Sales Manager for Eastern US from RTW, where he oversaw US sales and operations. Prior to that, he spent seven years as a Market Development Manager and certified US RF Expert for Sennheiser, in both the installed sound and professional channels. He has also served as Staff Engineer at Criteria Studios in Miami, Florida and performed live sound work for various concerts, corporate functions and theater applications. These experiences make Philadelphia-based Spahr an excellent candidate to grow DPA’s reach on the East Coast and in the broadcast, theater and music markets.

A former Film Sound Instructor with The Los Angeles Film School, Pedro Rocha joins DPA Microphones as Area Sales Manager for Western US. In addition to his bachelor’s degree in electronics and telecommunications engineering from the Santo Domingo Institute of Technology, Rocha also earned a certificate degree in audio engineering from the Musician’s Institute and attended Full Sail University’s online entertainment business master’s program. Prior to his teaching position, Rocha served as an Avid Pro Tools® Marketing Specialist and as a pro audio and musical instrument Sales Representative for a variety of retailers, which will serve him well for his current position. In addition to his responsibilities of West Coast sales, Rocha will also be tasked with overseeing growth in the film and music industries.

Building on his five-year tenure with the company, Shan Siebert has been promoted to General Manager from his role as Service Manager, which he has held since 2010. In this new position, Siebert will oversee the day-to-day operations of the US office, including distribution, technical assistance and loan facilitation. Prior to joining DPA Microphones, Shan served as a Radio Installer in the United States Army for four years, learning to solder and repair electrical equipment, and later earned a pastry degree that led to his own dessert company, where he learned the intricacies of business management. This unique background gives Siebert the perfect combination of trade and financial experience to manage and oversee DPA’s U.S. office.