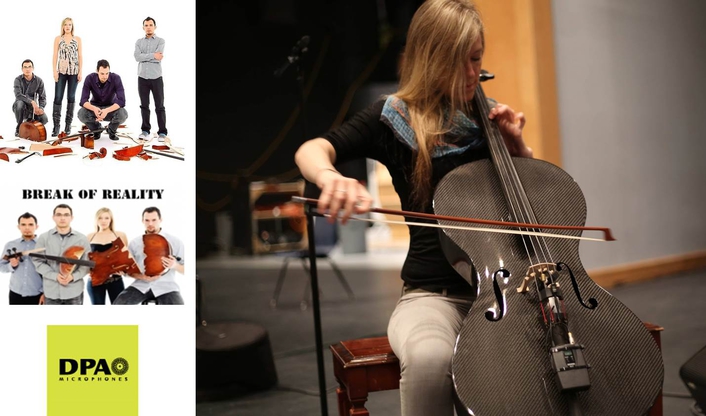 Company’s renowned Instrument Microphone provides quartet with quality audio and ease of use on tour
When a group of cellists decided to blend their classical music skills with their love of rock ‘n’ roll, the result was a cello-rock band known as Break of Reality. Comprised of three cellists and a percussionist, the group has been performing for more than a decade. During that time, the quartet has experimented with a series of audio setups, including both pickups and microphones, but continuously fell short of finding an ideal audio solution. That is, until they discovered DPA Microphones’ d:vote™ 4099 Instrument Microphone and its clip for the cello.

As the quartet takes to the road, the members praise their recently purchased d:vote 4099 setup for creating a new sense of comfort that previously did not exist when miking the cellos. The group has tested a variety of audio amplification setups, which evolved from an early dependence on pickups, and they say they can already recognize many benefits of the DPA mics, including a pristine natural sound and the unique mounting solution.

“We love the d:vote, I don’t know any other microphone of its kind that is designed specifically for the cello and that makes it a lot easier to work with,” shares Patrick Laird, cellist and Break of Reality co-founder. “Before we switched to DPA, we went through every type of pickup and eventually we got sick of the lack of a real cello sound. After that, we moved to a microphone system that had clip-on mics, but they weren’t specialized for string instruments like the d:vote 4099. With the old mics, we created a cable tie system to hold the mic securely to the instrument, because if we didn’t, the mic would occasionally fall off. We don’t have any of these problems with the d:vote 4099.

“We were very limited with our setup,” he continues. “If we had two back-to-back gigs in different places, we would have to cut off our whole cable tie system and take the microphones off. Now, the d:vote actually can fit inside the cases while still mounted to the cello, which provides a quick and simple setup. The mics have a great sound, too. The frequency response is much more balanced than anything we’ve used before, so it requires a lot less treatment in the venue.”

Now avid users, the quartet has familiarized themselves with DPA’s reputation for providing a highly durable and pristine sounding microphone. Plus, the d:vote 4099, designed with the touring musician in mind, can easily be unclipped and repositioned on the instrument, without any cable ties or other obstructions. This creates an effortless solution for the group. The accurate natural sound, balanced EQs and functionality of the microphone will come in handy as Break of Reality goes on tour through May.

“What’s especially cool about the mics is that we’re going to be using them in all types of venues on this tour, and that’s a big thing for us,” shares Laird. “Previously, when we performed at nice venues, we placed higher quality mics in front of the instruments to produce a better sound. When we played rock clubs, we had to go back to using pickups because our mics had feedback issues. But all that is behind us now. The d:vote is so versatile that we can use it as a professional microphone in 15,000-seat performing arts center auditoriums or for a simple amplification setup in small rock clubs.

“People in the industry, sound men, engineers, they have always told us we should really consider DPA Microphones,” he adds. “We didn’t make the switch for a while because of the cost of changing over our whole setup. But, we finally decided to make the move to DPA Microphones and we couldn’t be happier. They’re awesome, we love them.”

With the help of fan donations through the group’s Kickstarter campaign, the quartet is putting on a Music Education Tour, at which they will perform free concerts and host workshops at 10 school districts across the U.S. These performances will be held in conjunction with their regular tour schedule, in support of their latest album, TEN. In addition, 100 percent of the money raised at each performance will be donated to each school’s music programs. The overall goal is to collect more than $50,000 in support of music education. For its role in the campaign, DPA Microphones is donating additional d:vote 4099s, to be used as prizes on tour.

Formed in 2004 by Laird and percussionist, Ivan Trevino, who met at the Eastman School of Music in Rochester, NY, Break of Reality also features cellists Laura Metcalf and Adrian Daurov. Since its founding, the group has self-produced three records, with a forthcoming album appropriately named TEN, to celebrate a decade of success, released on March 25, 2014.