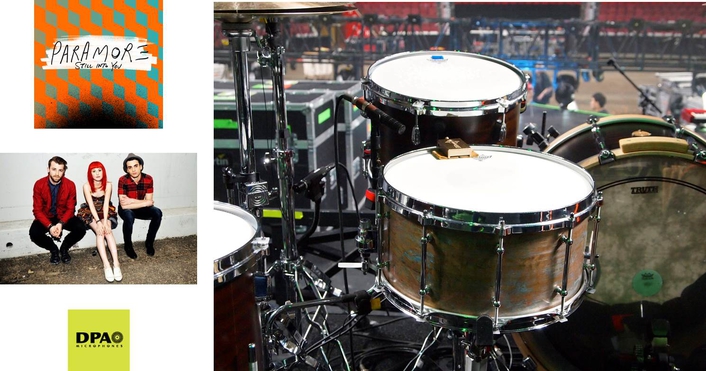 FOH credits the d:vote™ 4099 Instrument Mic and d:dicate™ 2011C Compact Cardioid Mic with delivering ideal percussion sound
DPA Microphones is drumming up some attention while on the road with the Grammy nominated alternative rock band Paramore for the band’s self-titled world tour. DPA’s d:vote™ 4099 Instrument Microphones and d:dicate™ 2011C Compact Cardioid Microphones are keeping Paramore’s touring drummer in beat with band mates and fans by delivering clean, clear and precise percussion. Equipped with universal mounts, these mics ensure that every stop on the band’s self-titled international tour features the natural sound of each percussion instrument.

Eddie Mapp, Paramore’s front-of-house Engineer, chose the microphones to help provide the band and audiences alike with optimal sound. Mapp has been using the d:votes on his acoustic guitar in the studio for quite some time, but received a tip to try them out on the drum kits from Metallica’s front-of-house engineer Mick “Big Mick” Hughes, who had recently made the switch to DPA for Metallica’s last tour and accompanying movie release. Now a staple for both engineers’ rigs, the duo considers the mics to be a recently uncovered industry secret, that Mapp has since been sharing, that provides the ultimate in natural drum sounds. 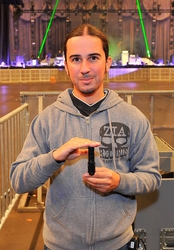 “I run into a lot of other engineers who are curious as to what I have been using to mic snare drums,” says Mapp.  “Mick learned about DPA Microphones from the production engineers working on Metallica’s 3D movie. He suggested I check them out – so I did. The first chance I had to try them on the drums was when I joined Paramore on tour in February. The band members were used to a specific sound from their mics, so I tried not to change it too much. The only change I have made so far is to use the d:votes and 2011Cs for the drum kit, and everyone loves it. We’ve done a lot of different press and promotions around the world and every engineer who hears the band is always instantly impressed with how natural the sound is from the drums.”

In addition to the clarity, the ease of setup is highly regarded by Mapp, who depends on DPA’s universal mount to customize Paramore’s sound. Mapp attaches several d:vote microphones to the stand below each crash and ride cymbal, as well as another for hi-hat. He also relies on the d:vote to mic underneath the snare and a DPA 2011C for close-miking the snare top. The simplicity of this setup, along with the assurance of the most concise sound possible, makes Mapp’s job easier.

“I just find that it is really easy to fit the snare drum with a DPA mic wherever you need it in the mix, as opposed to some mics from other manufacturers,” he continues. “I was blown away the first time I put the d:vote on the snare. It is my favorite snare microphone that I have ever had. As for the cymbals, I’ve done spot mics for many years and the d:vote is very impressive. Other microphones that I have tried end up rolling the sound off prematurely, but with DPA it extends that high sound.”

Designed for use in touring applications, the d:vote is a highly durable microphone available for use across several musical applications. The versatility and mounting options of the d:vote allow it to be effortlessly unclipped and repositioned for the most accurate positioning.
“The d:votes’ tiny cables make it look fragile, but we haven’t had a single issue,” says Mapp. “I hope to use more of DPA’s microphones in the future. I’ve heard the 2011C is phenomenal on guitar; I just haven’t had the opportunity to try that yet.”

An engineer for nearly 15 years, Mapp has spent the majority of his career providing front-of-house support for the American rock band Evanescence. He has also toured with Papa Roach, Taking Back Sunday, Stone Temple Pilots, Zakk Wylde and more.

Paramore is currently on an international, 110 stop tour to support the band’s fourth, self-titled release Paramore (2013). Lead by singer Hayley Williams, Jeremy Davis (bass guitar) and Taylor York (lead guitar), the tour also features Jon Howard (rhythm guitar, piano and backing vocals), and Justin York (guitar). Paramore will continue to tour in 2014 throughout North America, joined by Metric and Hellogoodbye as opening acts. The band also has two special performances planned onboard the Norwegian Pearl as part of the PARAHOY! Cruise in March 2014, for which the group and its fans will sail from Miami to Great Stirrup Cay, Bahamas.