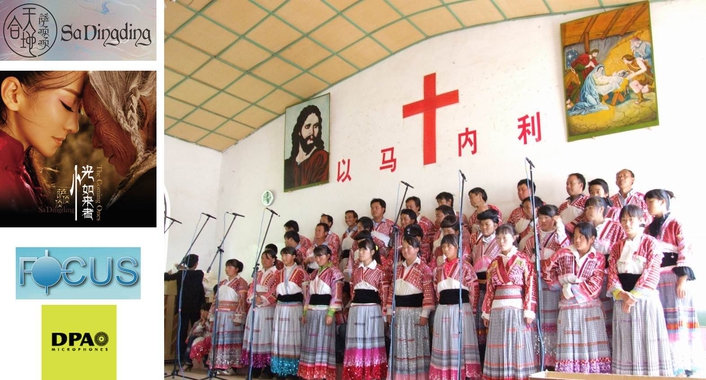 Producer Hans Nielsen discovers that DPA microphones can capture the sound of Chinese monks in a temple high above sea level
Recording at high altitudes is not something most sound engineers tackle every day, so when Danish producer and engineer Hans Nielsen, of Focus Recording Studios, was asked to record a choir of 500 monks in a Chinese temple that was over 4,000 meters above sea level, he knew he would need a very resilient microphone to cope with the challenging conditions.

“I’ve always been a big fan of DPA Microphones and have used them regularly for over 25 years,” Nielsen says. “When I realised this project involved recording at high altitude I knew I had to take my DPA microphones with me because they were the only mics I could rely on to capture the high quality sound I wanted in such extreme conditions.”

Hans Nielsen was recording the album with internationally acclaimed folk singer and song writer Sa Ding Ding. A mix of Han and Mongol ancestry, Sa Ding Ding sings in a number of languages including Mandarin, Sanskrit and Tibetan, as well as an imaginary self-created language that evokes the emotions of her songs. She also plays traditional instruments such as the guzheng and matougin (a horse-head fiddle).

“Sa Ding Ding wanted to include the Monk’s choir in her album, so we travelled to the temple, which was high up in the mountains near Tibet,” Nielsen says. “The monks were singing a mass and we captured their performance using nine DPA 4006A omnidirectional microphones and one DPA 4011A cardioid. Then, later that night, we used the same microphones to record a choir of 100 monks so that their singing could also be incorporated into two of Sa Ding Ding’s album tracks.”

Two days later, and this time at an altitude of 2,000 meters, Nielsen recorded a 50-strong Christian choir for the album, again using DPA microphones.

Nielsen says he chose the DPA 4006A and 4011A microphones because he was confident they could deliver the impeccable sound he was looking for.

“I did have other microphones with me but only the DPAs were able to cope with the extremely thin air. Everything else I tried was just too noisy and couldn’t cope with the atmospheric conditions. I was incredibly happy with the results we achieved using the DPA microphones – and so was Sa Ding Ding.”

Nielsen completed the album in Beijing, recording some traditional Chinese instruments as well as Sa Ding Ding’s lead vocals. The final mix took place in London and the album, which is entitled The Coming Ones, has now been released in Asia by Universal Records.