DPA Microphones Brings the Glitz of Gold to ProLight + Sound 2014 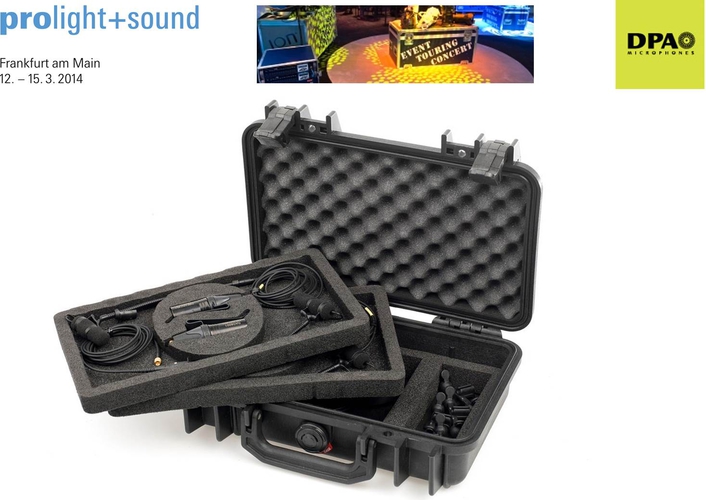 DPA Microphones will be focusing attention on its range of high quality microphones for the live stage
The company's award-winning d:facto™ Vocal Microphone will be sporting new grids with gold and nickel finishes – ideal accessories for vocalists who want added sparkle for their onstage performances.

“We saw a demand in the market to attain the d:facto sound with more than just the traditional black grids," says Christian Poulsen, CEO of DPA Microphones. "These grids provide the solution by bringing an exciting new visual dimension to a microphone that is already internationally acclaimed for its great sound."

The new grids are available as accessories to existing d:facto solutions and are delivered as metal grids with foam and pop screen. Additionally, the nickel option matches the finish available on the Sennheiser 2000, 5200 and 9000 wireless mic systems and comes complete with capsule and corresponding adapters. 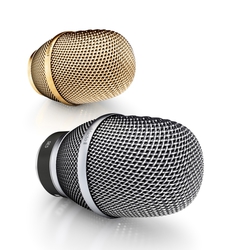 With a true studio sound for the live stage, the d:facto Vocal Microphone offers an extraordinarily natural sound with high separation and extreme SPL handling, giving users unlimited possibilities for their performances. In addition to use with the wired DPA handle, the d:facto provides singers and engineers with the added benefit of a state-of-the-art adapter system, which allows for seamless integration with many professional wireless systems.

DPA will also be using the ProLight + Sound platform to showcase its hugely popular range of d:vote™ 4099 Instrument Microphones.

Despite its tiny, discreet size and lightweight design, the DPA d:vote clip mic is rugged and stable as it features a versatile and extendable gooseneck, sturdy shock mount and a detachable cable, making it perfectly suited to the rigors of touring and live performance. As it was intended for fast-paced settings, the mic can easily be unclipped and repositioned or moved to another instrument with only one hand. Additionally, the d:vote’s microphone mounting system is designed to be extremely gentle, never marring the finish of an instrument.

On show for the first time in Europe will be DPA's new d:vote 4099 Rock Touring Kits, which give users a choice between a four-piece or 10-piece Peli case package. The company has also released two similar Classic Touring Kits for classical musicians.

"Our d:vote microphones have always been popular with classical musicians because they deliver such fantastic sound and allow musicians to capture the true sound of their instruments," Christian Poulsen says. "However, in recent years we've noticed a steady increase in sales to rock bands such as Metallica, D-A-D and Paramore, who have experienced how the DPA sound enhances their performance. With our Rock Touring Kits we are making the sound engineer's task so much easier."

Rock and classical musicians have embraced d:vote instruments microphones because they are so small and discreet, and because they come with an exceptional range of adapters. The 10-piece kit includes 10 d:vote microphones, 10 adapters and 25 holders for different instruments adjusted to either rock or classic applications. The four-piece kit includes four d:vote microphones, four adapters and 10 holders.

"With other brands, engineers usually have to use tape to get the mics to stay in place in certain areas that prove to be the best placements. d:vote has clips for all instruments and, with the new kits, engineers have an ingenious solution,” Christian Poulsen says. 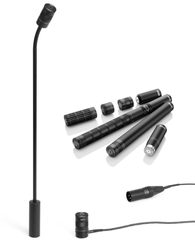 DPA will enhance its Prolight + Sound 2014 line-up by showing its superior d:dicate™ Recording Microphone range, which delivers high quality audio across many applications including live sound for touring and installation purposes. Now incorporating the new modular MMC4018 Supercardioid Capsule, the well-known MMC4007 High-SPL Omnidirectional Capsule (now re-launched for modular use) and the modular 4000 and 2000 microphones, the d:dicate range allows users to combine various capsules with DPA's state-of-the-art preamps for extra versatility. These preamps include the A, which is a Class A transformerless design; the B, a low cut and high boost filter version; the compact C option for visual unobtrusive miking; and the new modular MMP-E active cable preamp for hanging or table applications. An MMP-F modular boom pole is available for podium or floor stand use of the d:dicate capsules.

DPA Microphones Gives Live Performers More Freedom To Move
DPA's new d:fine™ 66 and 88 Headset Microphones are ideal for performers like actors, musicians and singers who need to move freely and don't want to be constrained by a hand-held microphone or a mic on a stand. With the flexible mechanics of the d:fine ear mount and the capsules from the legendary 4066 omni and 4088 cardioid headsets, the d:fine range now covers every need.

"We see a growing need for body worn microphone solutions and a need for them to be even more sturdy for the hard use in live environment, musicals, etc. Therefore, we launched the d:fine Headset Microphones a few years ago and selected the name based on a belief that the microphone would define a new generation of headsets,” says Christian Poulsen, CEO of DPA. "The d:fine certainly did meet our expectations, so we have now decided to expand the d:fine Headset series with this brilliant solution to give users a broad assortment of headsets and features. Combining the flexibility of our modern d:fine ear mount solution with the sound qualities of the classic 4066/4088 Headsets, fans  can choose between a variety of sound handling, size and cleaning options, depending on the intended application."

Shown to the world for the first time at ProLight + Sound, the series of d:screet™ 4060 Omnidirectional Miniature Microphone has a reinforced cable relief for even better robustness and to ensure that people who are not used to handling miniature microphones can use the mic without being afraid of breaking it. For the people who require even more security and where the visual size is of less importance, a heavy-duty version has been made, consisting of a stainless steel housing, a heavy-duty cable relief and a thicker 2.2 mm cable. Both models are exceptionally durable and ideally suited to the rigors of live touring.

"The expansion of the d:screet™ Miniature Microphones series is important for us to meet the ever more demanding needs from the market for a solid workhorse that delivers superb sound under challenging conditions," Christian Poulsen adds. "Apart from the upgraded versions of the d:screet 4060 series, we have also made a new d:screet Necklace Miniature Omni Microphone that is meeting the request from the market for a mic that can be mounted and de-mounted quickly several times by the untrained talent himself without a sound expert nearby. You don’t have to think about which clothes the mic is to be attached to – actually, being naked is not a problem at all. The d:screet 4060 Miniature Microphone is of typical DPA quality and is perfect for reality shows, for example. It has been used for more than a year in the Danish reality show, Big Brother."

Continuing its tradition of offering exhibition visitors even more bang for their bucks, DPA is once again running a daily draw at ProLight + Sound 2014, with the opportunity for a lucky person to win a DPA microphone (d:vote™ or d:fine™ single-ear headset). To enter, all visitors have to do is visit the DPA booth during the day, collect a special pin and then return at 5 pm for the draw.