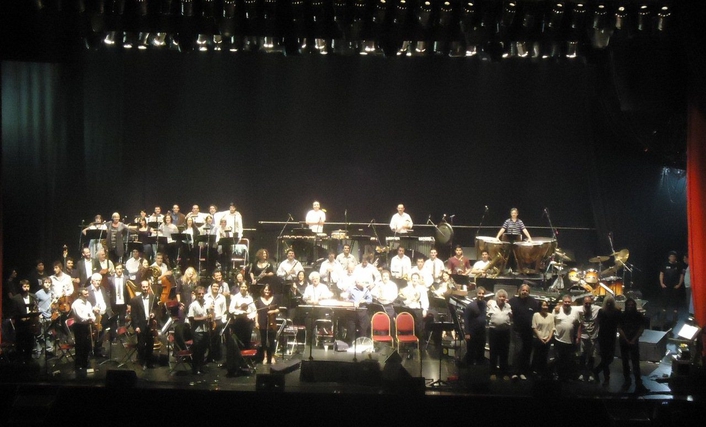 FOH sound engineer Ian Barfoot specified a large selection of DPA microphones to ensure the best results across eight concerts
DPA Microphones were present in abundance at the Gran Rex Theatre in Buenos Aires when world-renowned keyboardist and composer Rick Wakeman played two concerts featuring his best-selling albums Journey to the Centre of the Earth and The Six Wives of Henry VIII.

Front of House sound engineer and co-production manager Ian Barfoot, who has worked with Rich Wakeman on numerous occasions since 1985, was given the task of specifying the audio equipment for the tour.

“The two orchestral concerts in Buenos Aires involved more than 90 channels, of which more a third used DPA microphones,” Ian Barfoot says. “Although some of the equipment I wanted was not available in South America, I did insist on DPA microphones, especially for the orchestra. I used DPA IMK4060 Instrument Microphones for the harp and all the high strings such as violas and violins, while for the cello and bass we used DPA d:vote™ 4099 Instrument Microphones. We needed so many – over 30 in total - that we couldn’t source them all locally and had to ship the majority of them with us from the UK.”

For this tour, Barfoot and his co-production manager Erik Jordan also specified DPA’s d:facto™ Vocal Microphone, which was used by the two main vocalists Ashley Holt and Cecilia Barba.

“The DPA d:facto Vocal Microphones were supplied by DPA’s UK distributor Sound Network, who I often work with and always get great service from,” Barfoot says. “The d:factos were simply great and didn’t give us a moment’s trouble. They are very honest microphones and, to my ears, quite uncoloured. They don’t suffer from proximity effect and they coped just as well with the restrained orchestral shows as they did with the full-on band shows, which were very old school Rock and Roll. Once the monitor engineers got used to them, they were more than happy to use them in stage wedges. During the last two orchestral shows the delicate and highly accurate nature of the microphones could be fully appreciated by the singerds and the band as, to assist me, they switched to In Ear Monitoring to keep the stage levels down to a minimum.”

“He was a little reluctant to use one at first because it was ‘different’ and not what he was ‘used to’, but after a couple of rehearsals he became a firm fan and I think he is now hoping that Santa Claus will deliver one to him on Christmas morning.”

As a firm fan of DPA microphones, Ian Barfoot says he always insists on having a good selection available for every show he does because they consistently deliver a great sound and are also incredibly durable, especially on tour.

“In an ideal world I would have liked a few DPA 2011 twin diaphragm cardioid microphones to scatter around these orchestral shows, but as I couldn’t source them locally we managed with what we had,” he says. “Making sure the strings are properly covered is always my main concern with orchestral shows, but as we were using DPA IMK 4060s on those I knew I wouldn’t have any problems.”