DPA Appoints OKNO-AUDIO As Its Distribution Partner In Russia 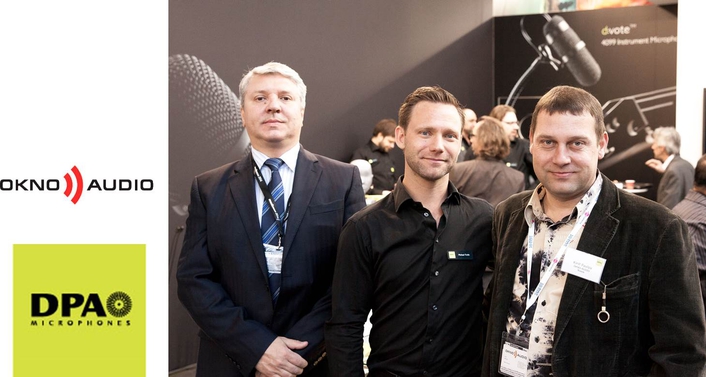 DPA Microphones has appointed OKNO-AUDIO as its new distributor in Russia, with responsibility for its entire product range including the Award-winning d:facto™ Vocal Microphone, the recently introduced modular active booms from the d:dicate™ Recording microphone and d:fine™ 66 and 88 Miniature Headset Microphones.

Established in 2012, OKNO-AUDIO is a division of Russia's premier broadcast systems integration company OKNO-TV, which itself has been in operation for more than 20 years. OKNO-AUDIO's staff have a thorough knowledge of the Russian pro audio market and the company is already a distributor of a number of key pro audio brands including Behringer, Harman Professional, Lab Gruppen, Mogami and Tannoy.

Michael Trolle, DPA's Area Sales Manager for EMEA, says: "The Russian market is growing rapidly and carries enormous potential for DPA. To maximise this, we need a strong distribution partner with an established presence in the live sound, broadcast and installation markets. OKNO-AUDIO fits this brief perfectly. The company understands the quality hallmark of the DPA brand and shares our proactive approach to developing the market for our products."

Trolle adds that OKNO-AUDIO has links with other high quality pro audio brands and this brings additional benefits to the partnership.

"Many of these brands complement our product range and OKNO's ability to offer a comprehensive equipment package gives them – and DPA – additional leverage in the market," he says.

Renowned for their audio accuracy, reliability and superb engineering, DPA microphones are the first choice for numerous recording and touring artists and sound engineers. The company’s extensive product range also encompasses many other industry areas including broadcast, film, theatre, installation, conferencing and security.

Kirill Pavlov, General Director of OKNO-AUDIO, adds: "It was extremely important for us to become a distributor for such a well-known brand as DPA. The popularity of these microphones is constantly increasing, both among system integrators and in the retail network. OKNO-AUDIO not only possesses one of the biggest dealer networks in Russia, but is also developing its own contract branch of activities by cooperating with theatres, sports complexes and sound recording studios.

Vladislav Manaenkov, co-founder and Executive Director of OKNO-AUDIO, continues: "By being part of OKNO-TV, which is the greatest TV and broadcast integrator in the Russian Federation, we have no doubt that the use of DPA microphones in this field will be valuable and up-to-date. We are proud to be an integral part of the DPA international team and will do our utmost for the brand's development in all spheres of the Russian professional market."