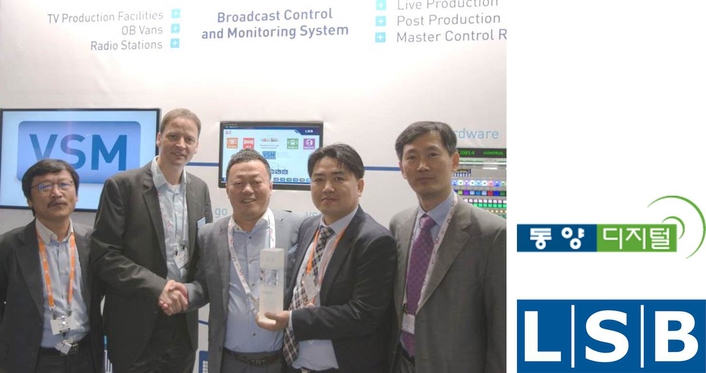 Prize-giving at L-S-Bs IBC stand: Mr. Hwang (DYD), Jamie Dunn (L-S-B), Mr. K.W. Lee (President DYD), Mr. Seo (DYD) Mr. Won (DYD)
L-S-B is proud to announce Dong Yang Digital, exclusive partner in South Korea, as their 2014 Distributor of the Year. It has been an exceptional year for the DYD team, led by their President Mr K.W. Lee. Their hard work has resulted in numerous sales both to OB Van and Studio Applications.

Customers include KBS, MBC and EBS. The result of their hard work can be seen at the 2014 Asian Games held in Incheon, South Korea in September and October 2014. The VSM systems will be installed in seven OB vans, several flight pack systems and as the main router control system for the Incheon International Broadcast Centre (IBC).

“Since appointing DYD as L-S-B’s exclusive distributor in South Korea, the DYD team have shown phenomenal commitment and dedication to ensuring the success of our VSM product with the main broadcasters in their country,’” commented Jamie Dunn, LSB International Director of Sales. ”This award is to recognise their continued exceptional support and sales performance over the past year.”

The award was handed over on L-S-Bs IBC stand.

L-S-B Broadcast Technologies GmbH, Wiesbaden (Germany), is the leading manufacturer of control systems for radio and television production. The company’s core product is the IP-based Virtual Studio Manager (VSM), a universal control system. As a single-source solution, VSM works independently of any single manufacturer and thus represents a flexible and powerful answer to technical challenges in the fields of production and broadcasting. Founded in 2003, L-S-B Broadcast Technologies can draw on an excellent worldwide sales network. A staff of 35 at Head Office in Wiesbaden is responsible for management, project implementation, services and software and hardware development.