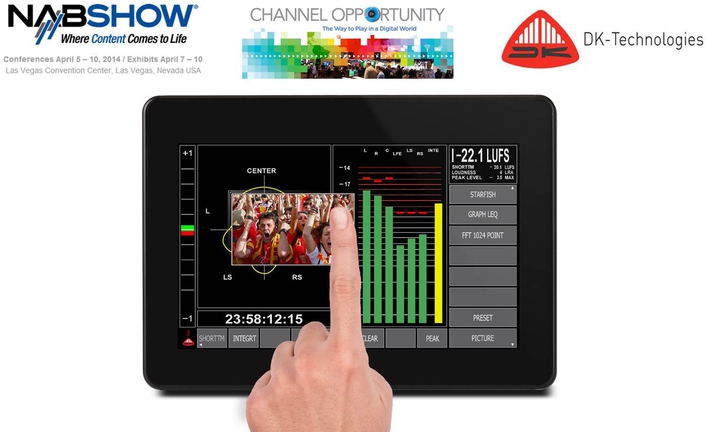 This everything included meter offers more features and functionality than competitor products costing nearly twice the price
Danish manufacturer DK-Technologies is using the NAB 2014 platform to highlight its new DK T7 Audio and Loudness meter, which will be on show for the first time in the USA (Booth N1201, in conjunction with Ward-Beck).

Launched to enormous critical acclaim at IBC 2013, the 'everything included' DK T7 is now shipping with the first units already installed into two Calrec consoles destined for Al Jazeera London.

The new DK T7 also includes 3G SDI Picture Preview, as well as the ability to read and log against SMPTE time-code – a feature that has only recently been added to the DK Meter range. At just 20 x 135 x 180 mm (depth, height and width), its compact design also allows it to be highly portable and easy to position, while its intuitive multi touch interface makes it very straightforward to use.

"The DK T7 allows end-users to adapt to virtually any format including 3G SDI I/O," says Uffe Kjems Hansen, Product Marketing Director at DK-Technologies. "The unit also offers 8 AES/EBU input/output channels, 2ch Analogue input channels, headphone output and HDMI monitor output. At just €3,495 and USD 6,390 MSRP, there is simply nothing else on the market in this price range that gives users access to so much functionality."

At NAB 2014, DK-Technologies will show a new Theatrical Mixing 7.1 Surround display feature for the DK T7, which will have particular relevance to engineers working on big motion picture productions. Also on show is a new pause/resume function for Loudness Logging that will save engineers time when they are adjusting Loudness to hit targets on larger time spans.

"Essentially, this function allows engineers to work step-wise through the entire audio clip, rather than having to go back and measure loudness from the top for every tweak," Kjems Hansen adds. "The DK T7 was already the most comprehensive audio meter on the market but with these new features it can deliver functionality that no other audio meter can offer."

DK-Technologies will also be using the NAB 2014 platform to launch its new Matrix PC application, which allows complete audio routing, preset handling, backup and overall management of an audio meter from the end user's computer. Designed to work with all DK meters including the new DK T7, the Matrix PC application gives users a much better graphical overview of their meters - and significantly easier setup and handling.

Also on show for the first time will be the new DK T7 Stereo – an entry level version of the DK T& meter that is designed for engineers working in stereo.