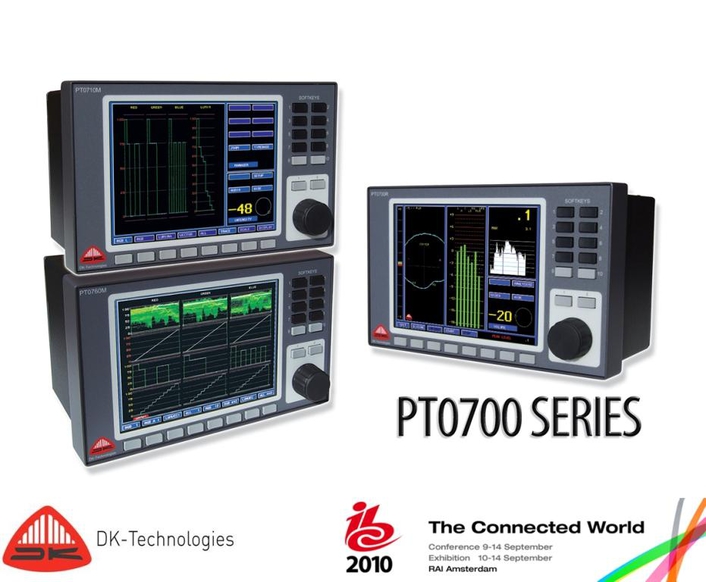 New to the European market is the PT0700R Client Panel
DK-Technologies is using the IBC 2010 platform (Stand 8:E60) to introduce a number of new innovations to its range of audio and video metering and monitoring products.

New to the European market is the PT0700R Client Panel - a remote unit for the award winning PT0760M HD/SD Multi-channel Video Waveform Monitor. This must see product is aimed at broadcast engineers who want to access the facilities of the PT0760M (and the entry level PT0710M) from an entirely different location. With the Client Panel in place, an engineer in one location can see exactly the same audio and video display as the engineer in the Master Control Room – and can access all the facilities of the PT0760M without interrupting its use at the master location. This saves money and time and effectively makes it possible for an engineer to be in two places at once without any magic or trickery.

The PT0700R Client Panel offers the same high quality display as the PT0760M/PT0710M and gives users access to a set of soft keys that replicate those on the main unit. Both the PT0760M and the PT0700R display can be independently controlled, allowing for either identical or individual display of video and/or audio signals at both locations. A simple DVI interface between Host and Client is provided and the unit follows a standard interface protocol, allowing any DVI/DCC interface to extend the distance between the remote and master units. It is also possible to remotely control the unit from a standard PC via the Ethernet port – an innovation that will be on show for the first time at IBC. 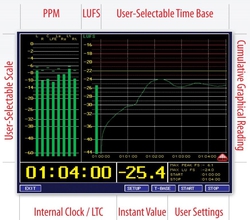 Also new for IBC is the PT0740M, an audio-only version of the versatile PT0760M waveform monitor. This unit, which is aimed at engineers who don’t need a video measurement tool, offers de-embedding from a single HD/SD SDi input and full StarFish™ surround Sound metering. It is complemented by the new PT0730M, which offers all the audio functions of its big brother but without the video input. These meters all benefit from the full range of PT0760 options, providing analogue and digital inputs and outputs, audio delay and Dolby decoding.

All of the products in DK’s PTO700 Series of waveform monitors can now be equipped with the company’s Loudness software, which is based on ITU algorithms and includes the 400Hz and 1kHz reference frequencies that are likely to be adopted by the broadcast and advertising authorities. DK has also introduced a new software upgrade that simplifies the issue of audio loudness even further by enabling audio engineers to literally SEE WHAT THEY HEAR. This software offers users the ability to see both peak and loudness metering at the same time, as well as providing dual loudness measurement (for example integrated and instant), while displaying the loudness in a graphical form. The PT0700 series also provides comprehensive logging so that reports can be easily produced to accompany the finished product.

The final new product for IBC is a revised version of the popular PT5300 Compact VariTimeTM Sync Generator. This modular multi-standard HD and SD gen-lockable sync generator already offers front panel and remote control, but it can now also offer Ethernet access and simple Network Timing Protocol (SNTP). From September, all new PT5300s will have these upgrades fitted as standard.