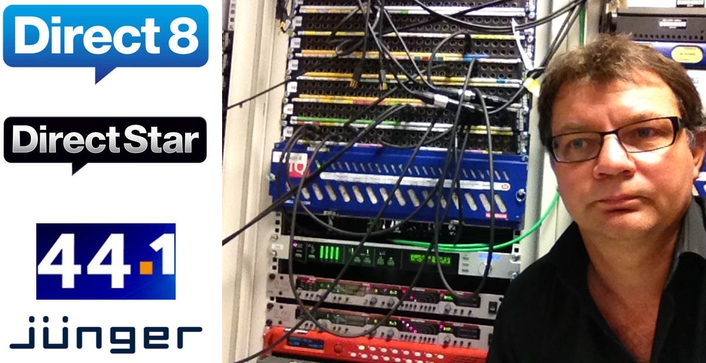 Based in Puteaux, a suburb of Paris, Direct 8 specialises in delivering news, cultural programming, entertainment and film, while Direct Star focuses on music programming including music documentaries and live music broadcasts.

In conjunction with its French distributor 44.1, Jünger Audio has supplied Direct 8 and Direct Star with four D*AP LM4 four-channel digital audio processors. Each channel now has a pair of processors that are being used to control and regulate broadcast audio loudness.  This investment in Jünger Audio’s EBU R128-compliant loudness control technology has ensured that both channels remain within the boundaries of new legislation recently introduced by France’s CSA (Conseil Supérieur de l’Audiovisuel).

Nicolas Albingre, Technical and Audio Visual Manager across both channels, says: “There are a number of loudness control solutions on the market that would have enabled us to implement the new EBU R128 loudness recommendation, but we chose Jünger Audio’s technology because we like the company’s LEVEL MAGIC™ adaptive control algorithm. LEVEL MAGIC™ is very effective at controlling loudness but it also gives us the audio transparency we were looking for. And, of course, it is compliant with R128, so it solves that problem as well.”

Jünger Audio’s LEVEL MAGIC™ algorithm allows broadcasters to adjust the audio level from any source at any time, with no pumping, breathing or distortion. Capable of using any kind of I/O (Analog and Digital) sources, as well as SDI, HD/SDI, Dolby 5.1 and all its related metadata, LEVEL MAGIC™ is based on a simultaneous combination of an AGC, a Transient Processor for fast changes and a “look ahead” Peak Limiter for continuous unattended control of any programme material, regardless of its original source. Its versatility, combined with its ability to deliver high-quality audio, has made it the algorithm of choice for line and real time processing.

Direct 8 and Direct Star are now using their D*AP LM4 units as part of their transmission delivery chain and Nicolas Albingre says he is very satisfied with the results they are achieving.

Jünger Audio’s Managing Director Peter Poers, adds: “Direct 8 and Direct Star are now part of a growing number of French broadcasters, including France Television and Canal Plus, which have chosen Jünger Audio’s loudness control technology to help them comply with the new CSA regulations. While it is satisfying to be able to provide a solution to a regulatory issue, it is even more satisfying that all of these broadcasters chose our LEVEL MAGIC™ solution because they appreciate the quality and transparency of the audio it delivers.”