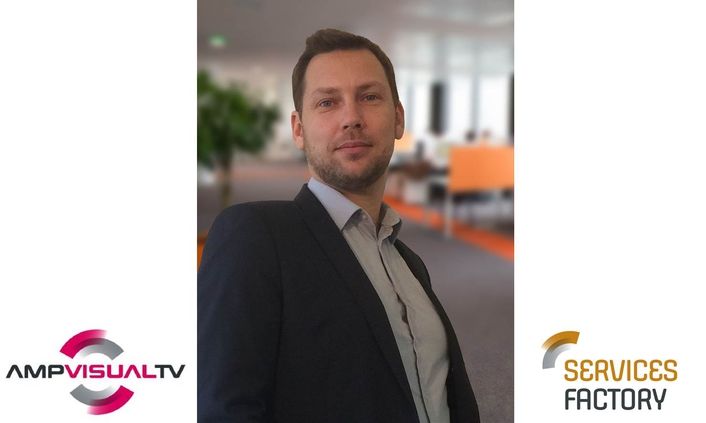 .
Dimitri MENDJISKY joins AMP VISUAL TV as Director of SERVICES FACTORY department. He has been tasked by Gilles Sallé (CEO of AMP VISUAL TV) to further its development in France and abroad.

SERVICES FACTORY also provides technical and human customer support for larger projects. For example, we offer advice on necessary technical equipment and workflows, and assist with installation, organisation and logistics.

With the growth of these activities, AMP VISUAL TV plans on significantly furthering its development in every continent, a desire which is marked by Dimitri Mendjisky’s arrival. Dimitri Mendjisky has worked for over twenty years in the television and digital audio-visual fields in Europe, Africa and Asia. This experience and his knowledge of these areas have given him real expertise in media development.

After beginning his career in production, he was tasked with the creation and management of thematic TV channels such as AlloCiné Télévision by Canal+ in 1999. Afterwards, as Director of Production, he played a role in airing Prime Time shows not only on TF1, M6 and France Télévisions, but also on Channel One in Russia and CCTV in China.

In 2007, he was named as the audio-visual attaché to Singapore by the Ministry of Foreign Affairs, where his role was to develop the promotion of the French media industry in the 14 countries of South-East Asia.

Three years later, he took charge of a media advice company in Kuala Lumpur (Malaysia), then created his own organisation in Paris for activities in West Africa. Dimitri Mendjisky assumed his new role in January this year.

About AMP VISUAL TV
Specialised in TV shoots, AMP VISUAL TV offers its services to any production line involved in live programming or programming produced under live conditions. It possesses one of the largest European fleets of OB trucks (30) and flight case control rooms (6) for outdoor shoots, as well as studios in the Parisian area (20), 8 of which are equipped with permanent video control rooms.
AMP VISUAL TV is recognised as a pioneer of new technological applications: HD OB trucks, 3D relief, 4K, digital RF, streaming, web servers, Media Centre, etc. It delivers 15,000 hours of programming per year, notably for gameshows, as well as variety, entertainment and news shows. It is particularly active in the area of live shows, special events and sports, especially motorsports, for which it has become known as a specialist worldwide. AMP VISUAL TV generates an annual turnover of 103 million euros and employs 400 permanent members of staff. The business has offices in Metz, Lyon, Cannes, Toulouse, Nantes, Paris and Les Sables d’Olonnes in France, as well as in Casablanca.