This spring saw Jeff Lynne’s ELO return to the stage, performing a series of flawless shows in arenas around the UK, including four nights at London’s The O2. Fittingly - for the band has drawn musician’s from Gary Barlow’s band to complement Lynne and long-time ELO pianist Richard Tandy - Gary Bradshaw and Steve Lutely, who have both worked extensively with Barlow and Take That, sit at the Front of House and monitor positions respectively. Each of them is working with their console of choice, a DiGiCo SD7.

In fact, the whole ‘machine’, as crew chief Onno Ooms describes it, is the same as for Take That, with the SD7s and the rest of the tour’s audio requirements supplied by Newbury-based rental company Skan PA.
“I’m using an SD7 because I wouldn’t use anything else,” says Gary Bradshaw. “On a tour this size there’s nothing better. I’ve used the SD7 a lot, so I know it inside out and I set it up the same every time, which makes life easy and means I can find things quickly. We have around 80 inputs and I’ve got left, right and sub for outputs. We have three hangs of speakers either side of the stage and flown subs, front fills and ground subs, then there’s a delay system all the way round. It’s very straight forward really.” 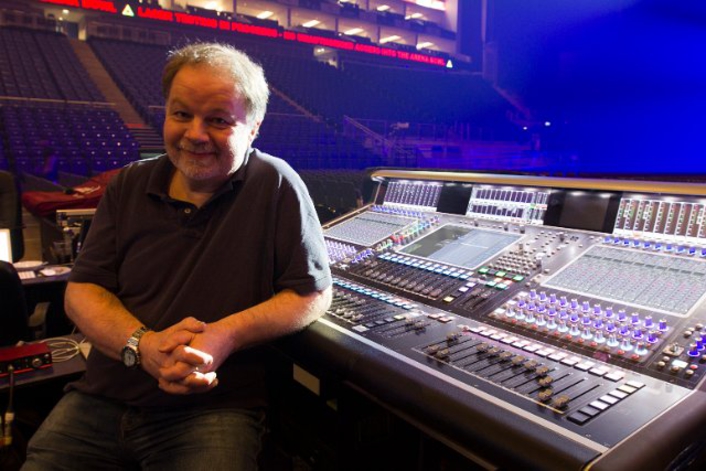 Gary is recording absolutely everything, at Jeff’s request, and running at 96k.

“What’s slightly unusual is that the very first time I met Jeff, which was right before the Hyde Park gig, before he even said hello, he said, ‘can we have no effects on anything please?’ And more specifically, no reverb, particularly not on the strings. Then he said ‘hello, how are you doing? It’s just his thing. There are a couple of little delays, but other than that there are no effects at all, which takes a bit of getting used to, but he just wants clarity and the SD7 allows me to give him that.

“Steve Jay, Jeff’s studio engineer, is out with us. He knows everything backwards, so it’s good having him around. We’re trying to get as close to the original sound as possible.”

Over in monitor world, Steve Lutley uses an SD7 because, like Gary, he believes it to be the best monitor console currently available. He set up comprises 14 stereo In-ear mixes, including techs, and a stereo wedge mix for Milton McDonald on guitar.

“I also run the whole shout system and all band member talk microphones through the console to try and make communication during a show as simple as possible,” he says. “The fact that we moved Jeff over to in-ear monitors for the first time meant that for this tour, more than ever, I needed a versatile console to be able to achieve all the ‘production’ type qualities and subtle changes for each track (and sometimes during) that a world class producer is listening for. And it had to sound great! The SD7 gave me all of these values plus the assurance that I know my way around it so well because it’s just so user-friendly. The choice of console has obviously worked as Jeff has been nothing but complimentary about what he is hearing.

With such an experienced team, everything has run very smoothly, but is Jeff happy with the results?
“He listened to what we were doing in rehearsals and I send him a recording each night,” says Gary. “But really if Steve is happy, then Jeff is happy.”