DiGiCo is in the saddle with Bombay Bicycle Club

.
Bombay Bicycle Club will forever be known as the last live band to play at London’s iconic Earl’s Court venue. But preceding that already-famous December show was a tour that had started nearly a year before, on which DiGiCo SD9 and SD10 consoles played a starring role.

Front of House engineer Tom Wiggans joined the band in the summer, part-way through the tour. A DiGiCo user for around 12 years - including working with UB40, Squeeze, Wet Wet Wet and The Cranberries - Tom’s debut with Bombay Bicycle Club came on festival shows, before he used a DiGiCo SD9 on the band’s US shows. He then chose an SD10 for the UK tour.

“One of the advantages of professional sound these days is how much preparation you can do,” he says. “I was able to get a multitrack recording of one of the shows, which I listened to on my laptop and figured out what was coming from where, because the band has a lot of instrumentation so it’s not always as obvious as you might think. That was a big help in preparing to take over from John,” says Tom.

Provided by SSE, the SD9 was fitted with Optocore and Tom was amazed at its flexibility and power from such a small footprint. Back in the UK, he chose the SD10 because having an extra fader bank made things a little easier and the extra channel count provided more flexibility for when guests were involved or other inputs needed adding.

The tour saw the four-piece band joined by two touring musicians and a three-piece brass section, with Tom mixing the show on around 48 channels. 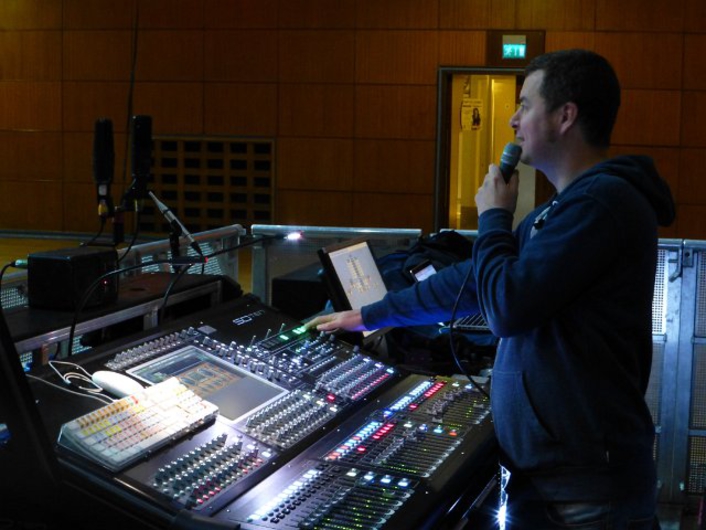 “Everyone played a bit of percussion and other instruments and they all moved round, so I used a lot of snapshots on the channel faders and mutes for the instruments,” he says.

“I also used Waves SoundGrid, which adds another dimension to the console. I was using the C4 dynamic EQ on the vocals but when I was using the SD9 without SoundGrid in the US I used the onboard dynamic EQ and was impressed at how good it was. The C4 is magic but the SD9’s onboard processing isn’t far off, if you don’t have the luxury of Waves.“

Tom was also making a lot of use of the SD10’s macros, including helping to manage and distribute timecode for lighting and video cues, as well as aiding communication between him and monitor engineer Simon Lutkin.

“I had a macro setting that basically switched my shout speaker and buss and PFL’d monitor world’s shout microphone, so we could quickly talk to each other with just one button pressed. That was very handy,” he says. “I also used macros for one or two delay cues, for example on Jack Steadman’s vocal there was one word that I’d try and catch - I just hit that and it turned up the send to the delay, which made it easier.”

Tom was using one of the SD10’s MADI ports to make a multitrack recording of every show, using Reaper running on a Mac Pro, via an RME interface built into the Mac.

“It was very handy to be able to share the screen between Reaper and the console. At the start of the night I set Reaper to record and didn’t need to look at it again, so I switched it back to the console view for the show. It meant less to put away at the end of the night,” he says.

“The flexibility and the power of the console also meant I could have a couple of FOH ambient mics, which I time aligned to the main PA via a record matrix by delaying the L-R mix to the ambient mics, I mixed the signals together and mastered them with a Waves plug-in to a stereo mix on a USB stick. This gave the band a real feel for that night’s show. It was a reference for anything they felt they could improve, because they work very hard on getting the live shows as tight as possible.”