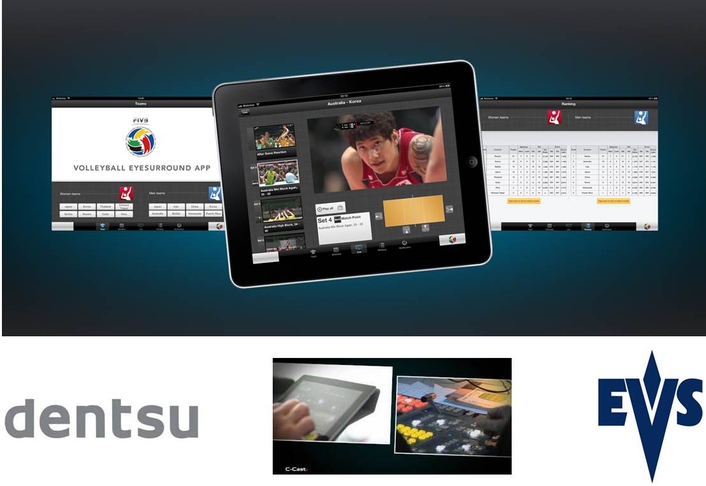 The C-Cast solution was sold to Dentsu by Photron, EVS’ exclusive distributor in Japan
EVS, a leading provider of broadcast and media production systems for sports, news and TV entertainment, has announced that Japanese media company Dentsu, one of the world’s largest advertising agencies, has selected C-Cast to power its second screen app, VOLLEYBALL EyeSurround.

Dentsu, which holds the rights to international volleyball matches for 2013 to 2020, decided to implement a second screen service to complement traditional broadcasting of Olympic volleyball qualification matches. Powered by C-Cast, VOLLEYBALL EyeSurround enables viewers to access additional content to the main live broadcast of matches, including clips from multiple camera angles. With this unprecedented installation, Dentsu is the world’s first sports media company to offer this exclusive service to the public.

“With multiple cameras recording every match, hours of footage is captured that never gets aired,” said Teppei Yasubuchi, project manager, Dentsu. “With C-Cast we can use this content to deliver an enhanced, interactive viewing experience. Viewers can replay the action their way. They decide what they watch, when they watch it, and from which camera angle.”

C-Cast is integrated into the existing live broadcast production infrastructure to enable the production team to deliver short clips from multiple viewing angles to a cloud-based storage, which can then be distributed immediately to viewers. The video clips and associated metadata are sent to a media data centre infrastructure. From there, they’re re-distributed to the various networks and delivered to viewers less than three minutes after the live action has taken place.

The C-Cast solution was sold to Dentsu by Photron, EVS’ exclusive distributor in Japan. As well as multiple camera angles, the VOLLEYBALL EyeSurround app powered by C-Cast enables viewers to watch live streaming of matches, check the latest team rankings, receive notifications when matches start, and get team details and match schedules.

“Media companies and broadcasters need to find new ways to engage audiences that no longer sit passively in front of their televisions,” said Olivier Heurteaux, general sales manager, EVS. “C-Cast enables them to use content they already have, which would otherwise go to waste, to deliver premium content, increase viewer engagement and create new revenue streams. With the VOLLEYBALL EyeSurround app, Dentsu is at the forefront of the future of sports broadcasting.”

C-Cast is currently being tested by a number of broadcasters and media organizations. The industry’s first advanced multi-camera solution enables instant distribution of multiple camera angle content to web-connected screens during live productions. Suited to any sports and live events, it offers broadcasters and media rights holders unlimited possibilities to deliver extended media packages to multiple audiences including TV viewers, spectators, coaches, journalists and referees. With a fully-modular and service-oriented architecture, it adapts to any kind of business or workflow, and offers advanced integration with third-party web systems and data import such as statistics, commercials and tweets.