Delft University of Technology flips the classroom for good 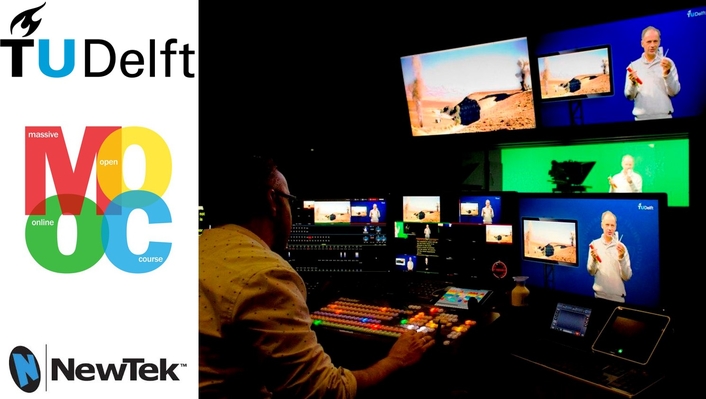 Delft University of Technology is known in the Netherlands for its high standard of engineering education. Now, due to the school’s technical expertise of online video education, TU Delft’s reputation has grown to a global platform. Today, it not only shares similarities with leading universities like MIT, Harvard and Berkeley, but also serves as an example for other schools when producing their own online courses.

“Early on, around the year 2000, we saw how the internet could be used for education, and we began building small sets and mobile studios to create lessons for online delivery,” says Jan Douma, AV Systems Engineer for the university’s NewMedia Centre. It was a bold move, but within years a new phenomenon called MOOCs gained momentum and TU Delft was already prepared. 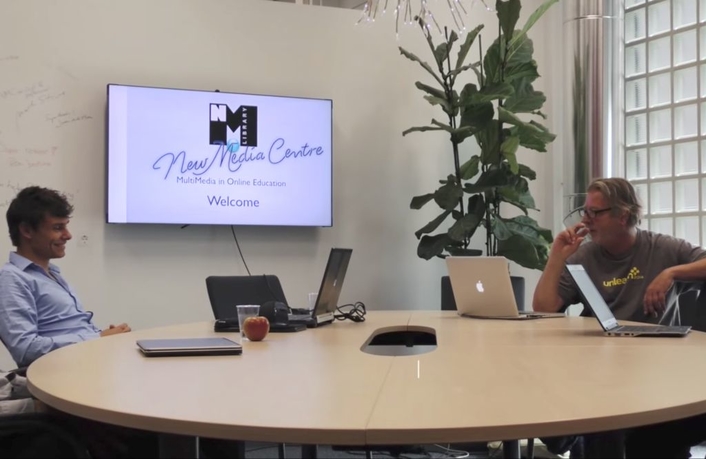 At TU Delft, the MOOCs follow formal curriculums that correlate with the courses offered to students enrolled in a degree program. “We had to create a system for production that would match the quality of education TU Delft is known for in the classroom,” says Douma. This involved addressing three major factors:

Delft University of Technology used a mix of technology, in-house development, and media expertise to design and build a production studio from scratch. This resulted in innovative video workflows that solved all three issues. 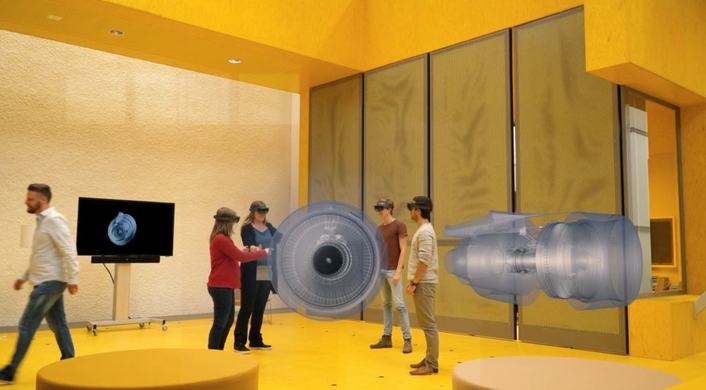 “What's interesting about TU Delft is that they have a firm rule about producing online lessons,” says Arnout van der Hoek, workflow consultant with Lines Broadcast BV, NewTek reseller in the Netherlands. “It’s a simple rule: ‘We do not do postproduction.’”

However, this wasn’t always the case. “In the beginning, we did all our video production the standard way; recording with a camera, doing multiple takes to get enough coverage, and then taking that footage and doing everything in post-production,” says TU Delft’s Douma. “It was very time consuming.”

Douma and his colleague Ruud van Zijl, devised a workflow that would allow them to produce complete lessons without any postproduction and built a studio to accommodate this. 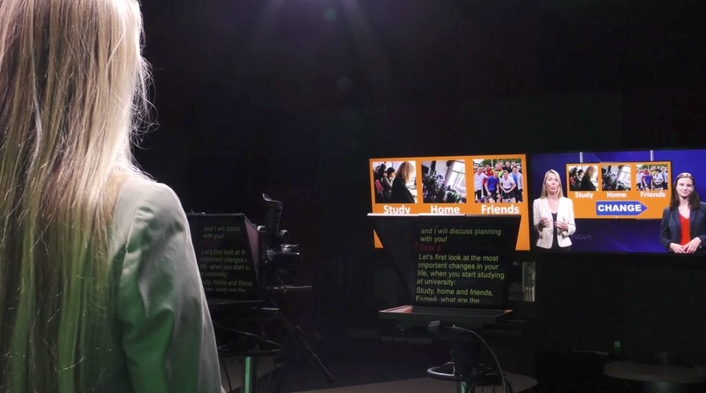 At the heart of the studio is the NewTek TriCaster 8000, with three JVC-Gy-850 cameras and other sources connected to it. “Because our productions are done in real time, we chose the TriCaster because it can simultaneously handle all the video sources we could use,” says Douma. “The advantage is that you get the continuity of lighting, position, and coordination when you switch camera angles live, so the quality is consistently the same”. This means that the production team don’t have the challenge of cutting together different takes in postproduction that may not match up.

“That’s the key to how the TriCaster works,” says van der Hoek. “You don't need postproduction because you make a polished, finished presentation in real time.”

Switching the production model to real-time has changed the game for TU Delft as it now has the ability to produce entire courses in less time.  “When we first started, one week’s worth of lessons for a MOOC – seven clips, with a recording session for each lesson, postproduction, formatting, and uploading to YouTube – took us two weeks to complete,” says Douma. “With the TriCaster workflow, we can do the same amount in about two hours.” 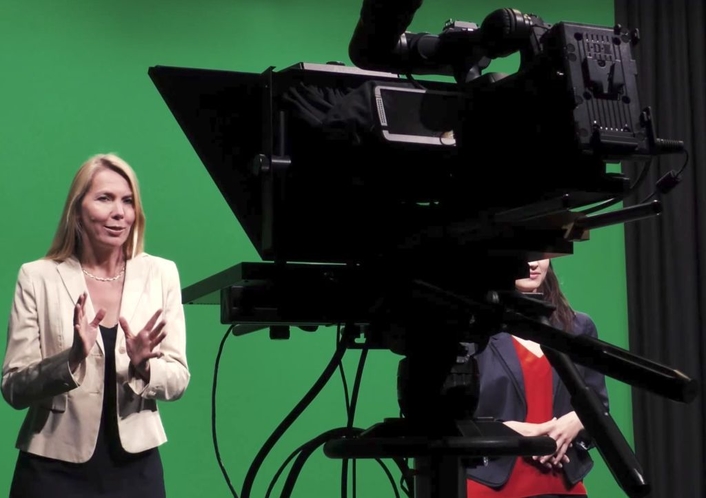 The dramatic boost in production was unheard of in educational networks. “At some universities, producing a single MOOC series can take about 6 months with a large crew,” says Douma. “With our TriCaster workflow, in the last four years, with 4 or 5 people, we’ve completed 60 MOOCs, 45 blended learning projects and 25 professional courses. That's about 5,400 videos in four years.”

This level of productivity has captured the interest of the other partner universities during a conference at TU Delft, some of whom have since adopted similar real-time practices after exploring the NewMedia Centre facilities. 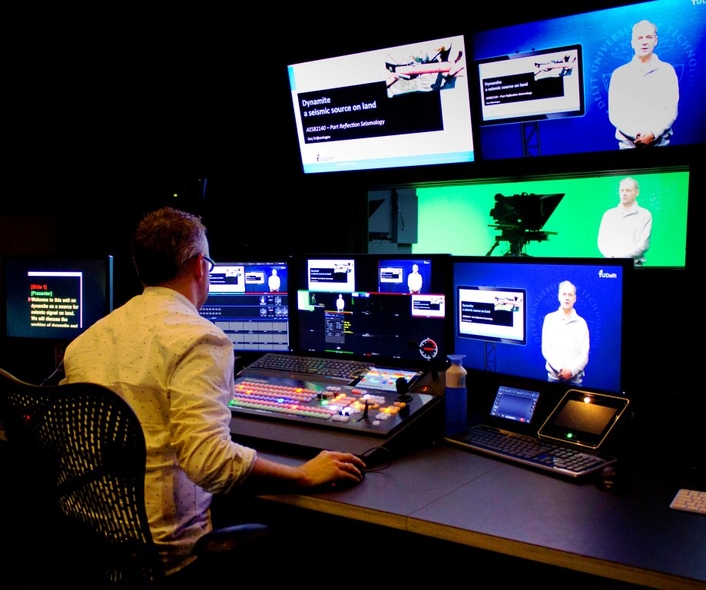 Depending on the instructors’ abilities, the NewMedia Centre has developed a tiered production model. “There are three levels of service – you do it yourself; we do it with you; or we do it for you.”

The more advanced main studio which is built around the TriCaster 8000 caters to the “done with you” and “done for you” models.

For lecturers who opt for the self-service model, Douma and his colleagues designed and built an in-house studio around a simpler TriCaster 410 workflow. The team have custom-developed interfaces using TriCaster SDKs and programming to provide automation control options that allow instructors to run their own shows in real-time.
“It's built like a giant green-screen photo booth,” van der Hoek says. Teachers who use this option can step into the studio, easily load their presentation, choose a background, and enter or import teleprompter text. They then add markers that indicate video switching decisions: when they want the program to display the full-screen PowerPoint, when they want the PowerPoint and the teacher in the same frame, or when only the teacher should appear. Then the studio lights go on automatically. 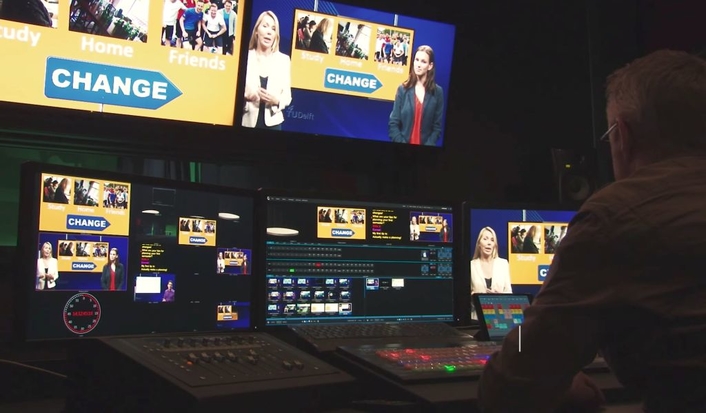 When instructors come to the NewMedia Centre with the intention of making a MOOC, the staff will put them through an extensive training program.

First, they introduce the instructors to the visual and technical opportunities. “We ask them to explore: what are the possibilities, which boundaries can you look for, how far can you push it? And then our technical staff can make it happen,” Douma says.

For example, one teacher had taught an experiment in his classroom by drawing on a clear pane of plate glass hanging in front of him. The staff thought it was a great visual and he should recreate it in the studio for his MOOC students. But logistically, it wasn’t feasible to install plate glass for this one professor’s lessons and remove it for the others’. Instead, they used NewTek’s NDI® Telestrator which is an over-the-network drawing application connected to the TriCaster by IP, to draw formulas and diagrams that would then appear over the camera source. “We can write formulas on the tablet while he’s explaining them, and the writing appears floating in the air in front of him,” says Douma. 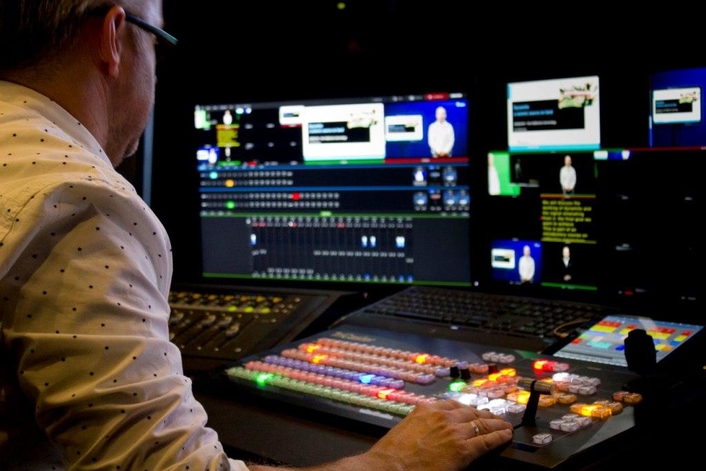 “We’re constantly experimenting with all kinds of elements, while avoiding postproduction. All those extra details that multimedia makes possible for learning – that's what we do here. And the TriCaster helps us bring it to life so it's more comprehensible for everyone.”

TU Delft will also train instructors on technical requirements: how to design PowerPoint slides correctly, how to write their scripts to sound natural, and how to optimize a teleprompter.

In addition, they will outline the importance of on-screen presence to deliver an engaging lesson. “We give our instructors media training from a producer that works in television. He helps the lecturers experiment with their own personalities and get more comfortable with video” says Douma. 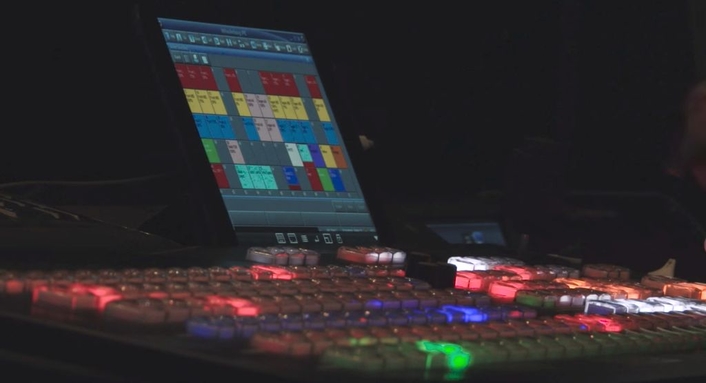 Achieving that comfort level was the key to TU Delft’s purchase of TriCaster systems. “In 2009, we visited the ISE Show and saw a demo at the NewTek booth. This was a live presentation showing how one person could operate a whole studio - audio, video, camera switching, graphics and everything,” says Douma.

“We thought, if we use the TriCaster, it will be less intimidating for the teachers. It will put them at ease, because they won’t be surrounded by equipment. They’ll be more comfortable seeing only one person, and not a large technical crew.”

Douma adds that the NewMedia Centre is always experimenting with advanced technologies, so they can stay a step ahead of the instructors. “We always have the new technology ready, we know how to work with it, and we integrate it with our TriCaster systems – so when the teacher says, ‘I'd like to try this new technique,’ it's possible. We already have it.” 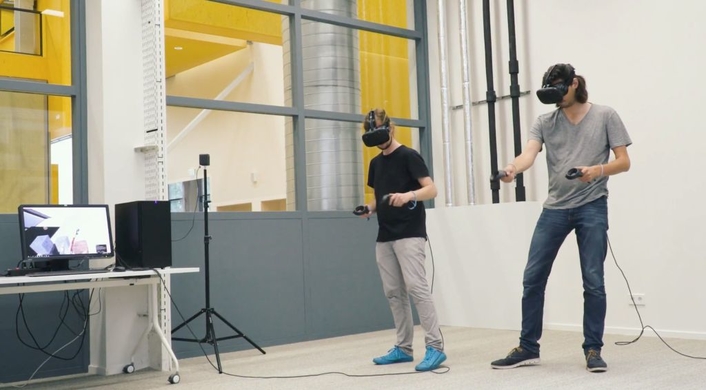 Jan Douma and his colleagues have integrated automation, virtual reality, augmented reality, and mixed reality into their TriCaster workflows.

“We're now working on 360 videos and that technology is going to be a huge opportunity to create learning objects. One lesson we’re creating explores a water treatment facility. In-person students have the chance to take a guided tour at the facility, but its capacity is only 20 students per tour. So the question was, can we make a tour in VR that is almost the same experience?”

His team went to the facility, scouted the location, captured some 360-degree video samples, and are now re-creating that experience. “You can replicate the guided tour at the site, but also interact with the machines, click on one to open a panel with all its stats and figures, what it's capable of, and where it fits within the systems of water treatment.” 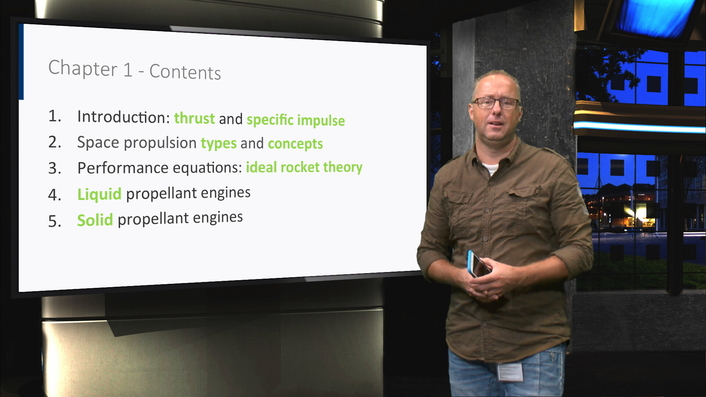 TOP RESULTS
There is always uncertainty when it comes to disrupting traditional learning methods. For instance, are students using MOOCs as an excuse to avoid attending classes in person, and just get the “highlights” online? At TU Delft, their research is showing that this is not the case.

In fact, they found, students use the MOOCs to supplement and review in-class assignments, especially while they are preparing for their exams.

“The instructors see their outcomes improving, their percentage of successful students are going up,” says Douma. “They’ve looked at the data, and they can see that the lessons they are producing in our facilities are really helping the students get even more engaged in what they're learning.”