DELEC Intercom To Be World’s Largest at Broadcasting House 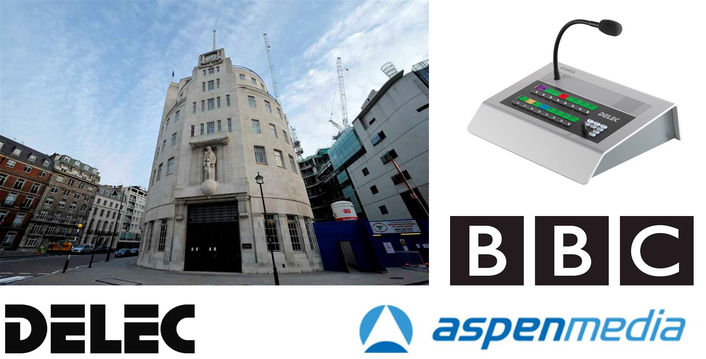 The rebuilt Broadcasting House, London
DELEC and Aspen Media are to undertake the second phase of the BBC contract for the provision of a DELEC intercom system in the rebuilt Broadcasting House, London. The system was installed during Phase 1 of the Corporation’s W1 Project, which was to completely refurbish the original 1930’s art-deco building, Broadcasting House in Portland Place W1. Phase 2 involves building the world’s largest television and radio online newsroom. When complete the development will be the home of the Broadcaster’s Audio and Music Division, BBC News and the World Service.

This second phase of the contract for BBC W1 comms, awarded to DELEC in 2004 following an EU competitive tender, will result in the largest intercom system in the world, widening the current Phase 1 system from 2552 to 4992 bi-directional ports. As a consequence, the expanded system will incorporate a 3072 x 3072 central router that can accommodate further expansion to 4096 x 4096 routing if required to meet future requirements. The router connects to a number of intercom frames via standard Ethernet links, which also allow the seamless connection of remote sites to the Broadcasting House intercom, with access to the full facilities and quality of the host system.

The occupation of the Broadcasting House extension will be a staged process, so DELEC intercom’s unique ability to operate separate operational areas as autonomous islands, is essential to ensure each area can be installed, tested and connected to the routers without disturbing the operation of any other part of the system. These operational islands permit each area’s talkback and intercom to be managed locally and allow for a more efficient use of valuable central router capacity.

The new system include over 300 desktop and rack mount panels, all offering 18 character labelling that is the standard in DELEC intercom and will operate at 48 kHz 24-bit.

DELEC’s MD Donald Dilocker said, “We’ve developed a completely new platform to meet the increasingly demanding requirements for facility wide and inter-site intercom. Our intention is that this becomes a multifaceted audio network capable of running many applications, the second of which is now intercom; the first being our commentary system for large sporting and entertainment events.”

DELEC Audio- und Videotechnik GmbH has been designing and manufacturing high-quality digital intercom and communication systems for over 20 years. Its customers include major broadcasters and large venues throughout the world. DELEC is a member of the SALZBRENNER STAGETEC MEDIAGROUP.
DELEC intercom and commentary systems are distributed in the UK by Aspen Media Ltd. Aspen Media has been supplying audio equipment to the broadcast industry for fifteen years under the leadership of Director Chris Collings.