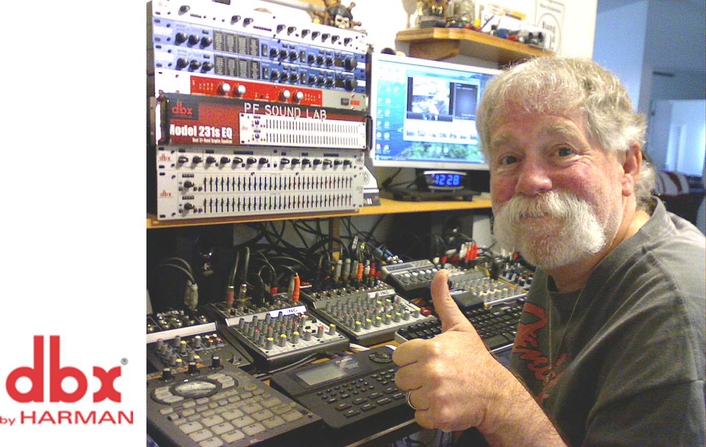 The 231S and 286S provide another sonic benefit Freeman would not have guessed at first
When musician and composer Phillip Freeman first received the e-mail telling him he would be receiving free gear from HARMAN’s dbx on Facebook he didn’t believe it. “I had never won anything before in my life,” stated Freeman. A user of the dbx 266XS compressor for his home recording studio, Freeman had been posting about how much he liked it on the dbx Facebook page. Once annually, dbx picks from the comments on its Facebook page and selects a “Friend in Need” and awards them a prize – in Freeman’s case a dbx 231S dual-channel 31-band equalizer and a 286S microphone preamp/processor. Freeman was chosen based on his compelling story and loyalty to all of the HARMAN brands.

Freeman might value his home recording setup more than most. The 63-year-old Freeman is disabled as a result of complications from Type II diabetes and can’t get out of his home very often. “I am literally at home all the time, every day, and I spend every day in my recording studio.”

The Bakersfield, California musician knew what he wanted to be from an early age. “I started playing guitar at age seven and it’s been my life ever since.” Freeman soon took up keyboards and bass, which became his primary instrument. “I was on the bill with dozens of top country, rock and pop artists. I made a few records and until 1990 playing music was all I ever did,” added Freeman.

“I got off the road when I got married but the need to make music never left me. About five years ago I put together a home studio with about the least I could get away with in gear – but it was enough for me to start recording and creating my own music again. A few years ago the effects of my diabetes got much worse, affecting my ability to walk so severely that I became permanently disabled. My home studio became much more than a hobby – it became a release, a solace, and enabled my to keep making music even though I couldn’t go out and play live anymore.”

Freeman started upgrading his recording setup as he could, given his limited budget. “I couldn’t afford a big mixer so I use four little mixers chained together that I bought over time. I bought a drum machine and learned how to program it. My son gave me some gear including two Lexicon MX200 Dual Reverb/Effects Processors, a DigiTech JamMan Solo Looper and the dbx 266XS compressor, so I became more familiar with HARMAN components and how useful they could be for a guy like me in making home recordings. I was so enthusiastic that I started posting on the dbx Facebook page.”

“I was able to make good recordings before, but the dbx 231S and 286S have taken things to a much higher level,” noted Freeman. “ The 286s’s built-in compressor, enhancer and expander/gate allow me to really warm up and tweak each track. I’m using it on instruments as well as vocals – I write a lot of instrumental music and the 286S works really well on instruments as well as vocals, even though it’s known as a mic preamp. I’m particularly impressed on how well it works on electric bass. My tracks now sound like they were done in an expensive pro recording studio.”

The 231S and 286S provide another sonic benefit Freeman would not have guessed at first. “Since I’m recording at home, I have to use small solid-state guitar amps – I can’t crank up big tube amps. I used to get a lot of noise and wasn’t happy with the recorded sound of my amps. Now, with the 231S and 286S, I can boost, clean up and EQ the sound of the amps to where they sound great. That alone is worth every penny. I had never thought about getting a mic preamp before but now, because the quality of the individual tracks is so much better, I find myself having to do a lot less fixing in the final mix.”

“Now that I have them, I don’t see how a recording studio could operate without these components,” Freeman concluded. “They’re especially useful for a home user like me. I can’t explain the joy I get from making music. There are no words to express how happy I am now.”

“dbx is lucky to have so many fans and followers that have supported the brand for over 40 years. Phillip is one of those loyal fans and we are very pleased that we could help him in reaching his goal of improving his studio,” stated Noel Larson, Market Manager, Portable PA, Tour and Recording at HARMAN Signal Processing.