d&bridging the Gap at the University of Southampton Students' Union

.
The University of Southampton Students' Union building, more familiarly known as SUSU, is a busy place offering a broad and varied range of facilities to the twenty two thousand students enrolled at the University of Southampton. The Bridge venue offers a relaxed bistro dining experience during the day and in the evenings is host to a varied line up of events and performances. Consequently when Ed Blackwell, Assistant Technical co-ordinator at SUSU, needed to install a new loudspeaker system into The Bridge venue, his shopping list needed to tick a lot of boxes simultaneously.

The choice of a d&b audiotechnik loudspeaker system from the xS-Series was made after extensive research despite SUSU already being a d&b customer through Entec Sound and Light, as Blackwell explains, "When The Bridge was refurbished, the aim of the project was to create a space that appealed to a wider demographic of students, provide a small gig space for acoustic acts, comedy and student led society events and to provide a relaxed social space during the day. As a current d&b customer it might have seemed a foregone conclusion that we would opt for d&b, however I had very tight financial constraints to work with and our final choice had to prove itself both in quality and value for money. I approached two or three different companies each offering various systems. The only demonstration I observed was with d&b audiotechnik at Nailsworth, as I had already heard the other systems previously."

Blackwell originally had reservations about the 5S loudspeakers being an appropriate choice and was unfamiliar with the xS-Series generally, so accompanied by Entec's Audio Sales Manager Peter Codron, Blackwell visited the d&b UK Headquarters in Nailsworth, Gloucestershire for a demonstration. Here he was met by Oran Burns of d&b Education and Application Support who commented, "Ed and Peter had a good idea of what they were after but the demo gave them the reassurance that they were picking exactly the correct system for the variety of jobs the system needed to do. We listened to the whole xS-Series and then had a discussion on which systems would be suitable. Once we had established which mid / high cabinets we would use, we then moved on to the different subwoofer options available. As the venue will be used for live performances and for DJ events it was important to provide a system with adequate low frequency extension. I felt that Ed went away very happy with the outcome."

Blackwell himself concurs, "The purpose of the visit was to listen to what d&b could offer that would work within the design I had come up with. I had never heard the smaller installation range before so the visit was crucial to the final decision. The demonstration was amazingly helpful and the staff there on the day were very knowledgeable and informative. I was originally concerned about the performance of the 5Ss, however I was astounded by the quality and range of performance they gave and amazed by the dispersion. We then went on to selecting the larger boxes which would be used for evening events and band reinforcement. I had in mind the 10Ss however having heard the 12Ss I knew that that was the box for us, the dispersion and response from the unit was exactly what I was after. The real struggle came with what subs to go for. My original plan went for the smaller 12S-SUBs, however after a good hour of listening to various combinations I eventually went for the larger 18S-SUBs." 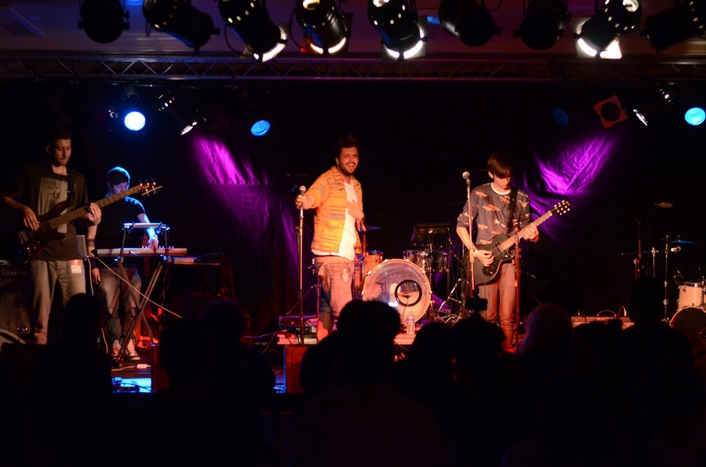 Back at SUSU Blackwell set about trying to address the acoustic challenges of the room itself, "The venue has three walls of glass and a sprung, wooden floor along with hard and reflective furnishings which made any form of sound reinforcement challenging due to reflections and multiple standing waves. So we softened the response by moving to large, soft furnishings and installing carpet. The addition of wooden slatted blinds to the windows and added breakup blinds to create booths around the venue also helped.”

The Bridge reopened in October 2012 after the refurbishment project. It now seats two hundred and fifty people for food during the day and accommodates a comfortable two hundred plus during evening events. Just as one would expect in a lively and vibrant students' union, performances are very diverse, from student societies and comedy nights that demand a clear vocal performance to live music and club nights featuring big names like The Ministry of Sound. Variety is the name of the game, as Blackwell remarks, "During the day we need a very controlled and high fidelity system for background music to provide atmosphere. When evening comes the system needs to cater for regular spoken voice events where dispersion and fidelity is key, but equally needs to provide a front of house PA for when live music is on the agenda."

So has the refurbishment been voted a success? "A resounding yes from all," enthuses Blackwell. "All of our engineers love working in the venue. DJ's and acts alike have all commented on the clarity of the system and we no longer have any issue with noise spill; that's purely down to the system design and the lack of kick back from any of the boxes. All boxes duly ticked then.